Do you “LOL” to reveal your jovial side to the online masses? Or do you “HA HA” to extol your peers’ social smack-talk?

Facebook has just published some interesting data on the myriad different types of “written laughter,” from “haha” and “hehe” to “lol” and emojis.

Facebook’s muse, on this occasion, was Sarah Larson, a reporter for the New Yorker who recently penned an article called HAHAHA VS. HEHEHE, which explored the growth and social nuances of “written” laughter in the digital age.

“The terms of e-laughter — ‘ha ha,’ ‘ho ho,’ ‘hee hee,’ ‘heh’ — are implicitly understood by just about everybody,” opined Larson. “But, in recent years, there’s been an increasingly popular newcomer: ‘hehe.’ Not surprisingly, it’s being foisted upon us by youth. What does it mean?”

While Larson’s piece made for an interesting anecdotal read, Facebook turned its attentions to hard data — covering posts and comments — to see what people use most often. After analyzing data from the last week of May that contained “at least one string of characters matching laughter,” Facebook has now presented the results in graph form. 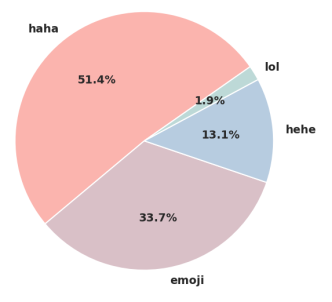 It transpires that 15 percent of people expressed some form of written laughter in a comment or original post during the last week of May. And while your specific friend-demographics will dictate what you see most often, Facebook’s numbers reveal that “haha” is, on average, the most common expression of mirth, by a majority of 51.4 percent. Perhaps surprisingly, “lol” accounted for less than 2 percent.

For the sake of keeping things sensible, there are only four categories — “haha,” “lol,” “hehe,” and emojis — which are little smiley faces. But it’s worth noting here that Facebook has lumped together various permutations of “haha,” including “hahaha,” “haahhhaa,” and so on.

However, the company has broken out the data for laughter length too, in specific response to Larson’s assertion that “ha’s” and “he’s” are akin to Lego pieces — people tack more letters on if they find something particularly amusing.

Interestingly, there are peaks on even numbers, which supports Larson’s “building block” notion. People generally prefer not to tack on rogue letters (e.g. hahah). Four-letter “ha’s” are the most common, followed by six and eight-letter incarnations, while “Lol” is more often than not a lone wolf. 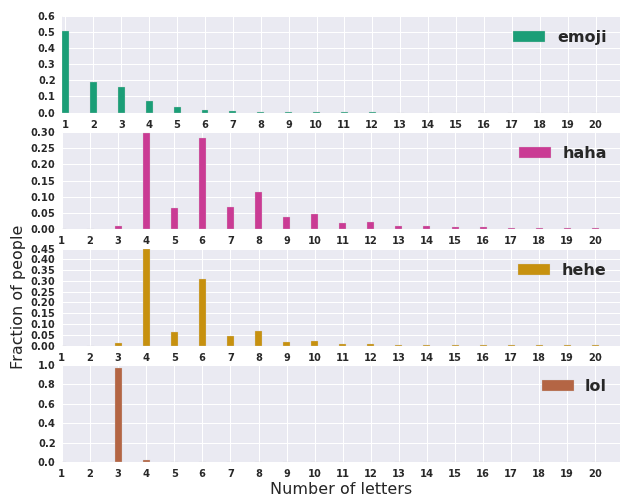 Facebook’s graph only runs up to 20 letters, but it reliably informs readers that some e-laughs were more than 600 characters long.

It’s also worth noting here that Facebook doesn’t analyze private data from Messenger, its instant messaging app, which means this data may not reveal the true e-laugh picture. This is only what people use on the public Facebook platform.

At any rate, if e-laughter data fascinates you, and you want to dig into the numbers by gender, geographic location (U.S.), and age, then it’s an interesting little read.