My 15-year-old kid is about to get her driving permit. I had the bright idea of teaching her how drive in a racing simulation with a realistic force-feedback steering wheel, complete with stainless steel throttle, brake, and clutch pedals. We performed an experiment with a high-end console game and steering wheel with the aim of answering the question: Can a video game teach you to drive?

To no surprise, I have been singularly unsuccessful in getting these daughters — and their older 18-year-old sister — to play any console game with a game controller. But as soon as I set up the $399 racing wheel, they couldn’t get enough of it. The game controller was intimidating, but the racing wheel made the video game console so much more accessible to them. It was as if I gave the car keys to them for a joy ride. If you’ve got some novice drivers or gamers, the wheel is an excellent way to introduce them to racing games.

It’s probably not, however, a great idea to teach your kids how to drive in cars that can easily go more than 100 miles per hour. But what the hell. I figured it’s better than having them wreck any of my real vehicles. 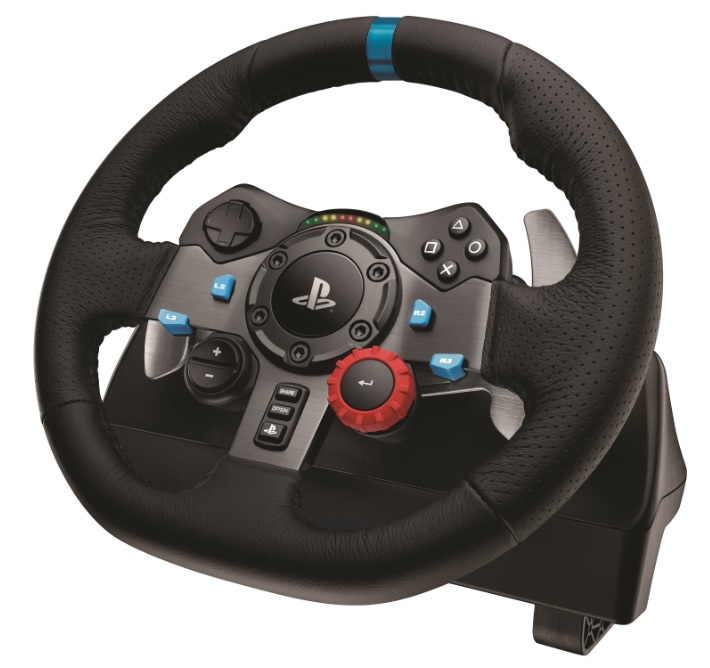 We used the recently launched Logitech G29 Driving Force, a force-feedback racing wheel for the PlayStation 4 (it also works with the PS3). This is a precision racing wheel with dual-motor force-feedback transmission and anti-backlash helical gearing. It has a fancy hand-stitched leather-wrapped rim, as well as pedals that you can step on. I attached the wheel to a wooden chair and stabilized it against a coffee table — and we were ready to race.

We fired up Project Cars, a motorsport racing simulator video game developed by the British video game developer Slightly Mad Studios and published by Bandai Namco Games. The wheel also works with the F1 and Drive Club racing games. Project Cars lets you do practice driving around a track in Dubai or just go online to do “community racing” against other real players.

The experience isn’t cheap, but it’s not as expensive or frightening as putting a kid into a car. And the video game simulation with the racing wheel “feels real,” according to my 12-year-old, who played it nonstop. The wheel realistically simulates the feel of your car with weight shift, realistic, road conditions, and tire wear. You can sense whether you are under- or over-steering. You can feel whether the wheels are losing traction around a corner.

The Logitech G29 Driving Force features solid steel ball bearings in the wheel shaft, and stainless steel paddle shifters and pedals. The clamps and bolt points allow you to mount the wheel on a table or racing seat to minimize any wobbling.

The PlayStation 4 button controls, D-Pad, and semi-automatic paddle shifters are all located on the driving wheel. Light-emitting diode (LED) indicators tell you exactly when to shift. You can also fine-tune your driving preferences with a 24-point selection dial. 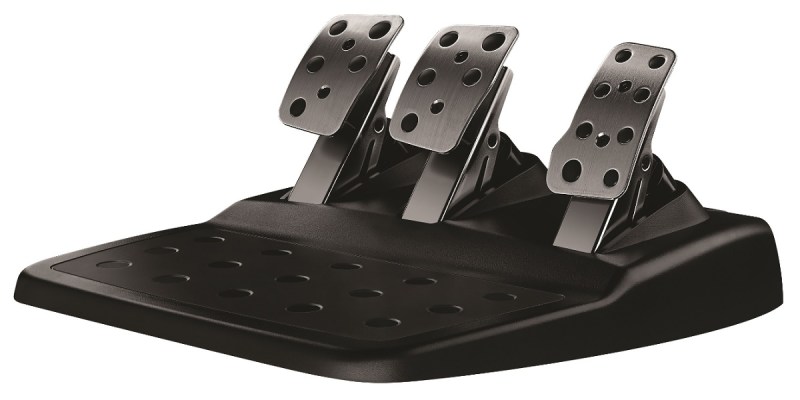 Above: Pedals for the Logitech G29 racing wheel.

One of the best things about the wheel is that it automatically calibrates itself. But if you need to manually calibrate, you can press the square button while in the “wheel options” menu in Project Cars.

You don’t have to spend a lot of time figuring out how to make it work. (I tried it on Ubisoft’s The Crew, but then I figured out that it doesn’t work with that particular game). I put a box behind the pedals so that the base didn’t slide around the floor. A carpet grip can lock onto a carpet to reduce movement when you step on the gas.

A switch at the center of the wheel allows you to set for either the PS4 or the PS3, to ensure a compatible ride. If you want, you can get an add-on stick shift to shift into any one of six gears. The Driving Force Shifter is sold separately. I just used the metal bars on the back of the steering wheel to shift. Using the manual shifting really adds to the realism, as you have to keep your hands busy. 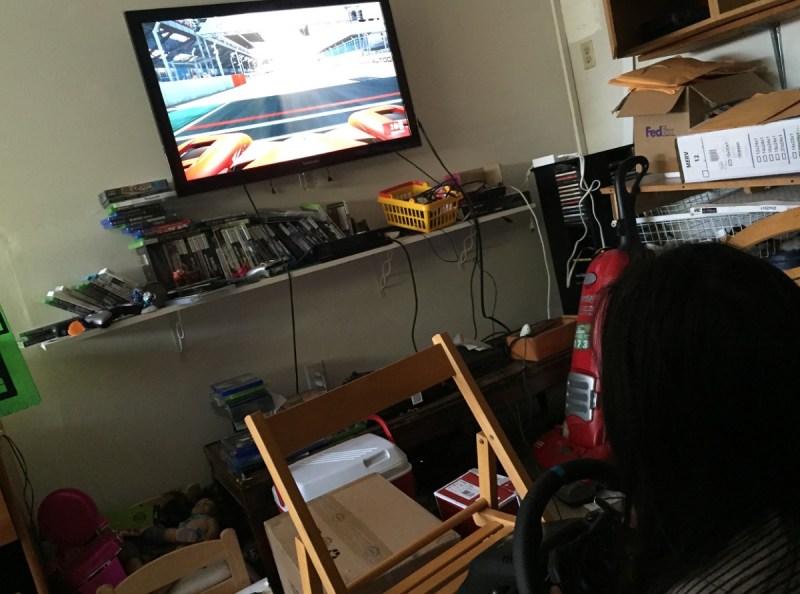 Above: My kid, driving with the Logitech G29 Driving Force racing wheel.

Now, back to the kids. My 15-year-old was completely green. She’s never been behind a steering wheel of a real car. I had to tell her that the gas pedal was analog, something you had to get used to by pressing it and feeling the car go. She did that and saw how it worked. She picked it up pretty quickly. The brake was a little tougher, since the game doesn’t really encourage to use it. It just has a lot of open road with no stop signs or other hazards that make you want to slow down.

So yeah, a race track isn’t the ideal place to learn how to drive. But my kid did get a feel for speeding up and slowing down. Steering was another matter. It’s tougher to control a race car than it is to drive a normal vehicle. If you turn suddenly, you can spin the car out of control if you’re going fast. The wheel shakes a lot as well. That part taught my kid to hold tight to the wheel for dear life. She had to man-handle the steering wheel just to get the car to go straight. The constant shifting of gears was also a distraction from the real task. 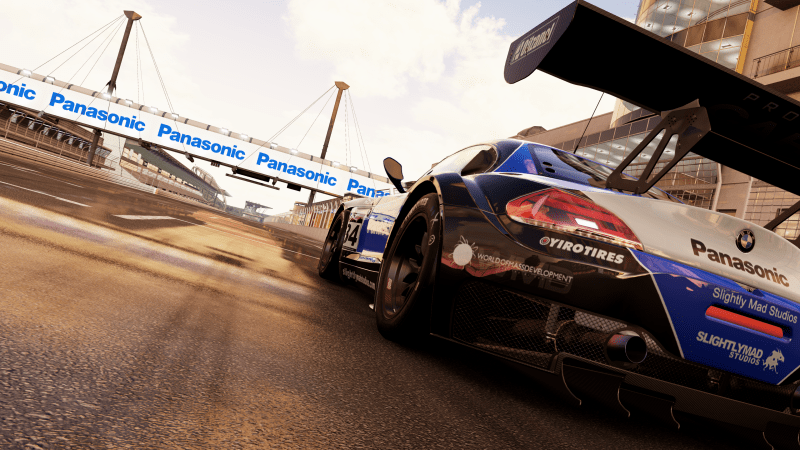 Above: Tear your attention away from the gorgeous car and the realistically wet asphalt and check out those clouds.

And the real task was to go as fast as possible on the race track until a turn came up. The first bunch of times she drove, she wasn’t prepared to make a sharp turn. So she banged into the wall a bunch. Fortunately or perhaps not, the cars don’t disintegrate in Project Cars. You can lose a hood or a wheel, but you don’t really wreck the car. She had to use reverse to get away from the wall, and that taught her how to move backward. Then she was off again.

After a few minutes, she was driving competently and making turns properly. So you could say that she learned how to drive. After a relatively short time, she noted that her foot was sore, and she quit.

The 12-year-old, on the other hand, drove like crazy. She just kept on racing around the practice track. After a while, we took her into a live race against other players. But she crashed into a wall and lost a wheel. She went into the pit stop and the crew changed the wheel. Then she went out on the road and crashed again, losing another wheel. This went on for a while, and she didn’t really get a respectable time. But she went back at it over and over, and eventually got pretty good at staying on the road.

The older sisters played the game with the racing wheel, which was more than they had ever done with any other video game. But they still got bored relatively quickly. But it turned out that my 12-year-old kid really fell in love with the idea of learning to drive in a video game.