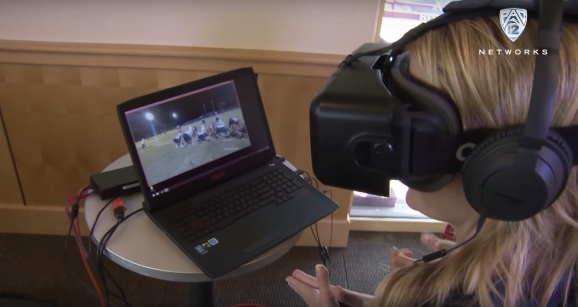 A demonstration of Strivr.

The New York Jets have started using it at training camp ahead of the 2015 NFL season, the New York Daily News reported today. Other professional teams that have used Strivr’s system include the Dallas Cowboys, the Minnesota Vikings, the San Francisco 49ers, the Arizona Cardinals, and the New England Patriots.

College teams are also checking out Strivr, which got its start during the 2014 season at Stanford University. The University of Arkansas, Clemson University, Dartmouth College, and Rice University are among the startup’s customers, according to the Strivr website.

Strivr provides teams with the ability to record games from a quarterback’s point of view, showing teammates to the left and right and opponents farther out. Watching and listening to the footage often enough could help players become more prepared for similar scenarios during actual games.

The application of the Oculus lines up with efforts over the past year to make wearables such as the Google Glass useful at work.

The complete package of Strivr equipment, including a 360-degree camera, starts at around $250,000, Strivr founder and chief executive Derek Belch told the San Diego Union-Tribune in May. And one part of the system, the Oculus Rift, isn’t even commercially available yet — Facebook, which bought Oculus last year, will start shipping the headsets to consumers in early 2016.

With teams swiftly adopting the technology, Strivr could become a target for investment from venture capitalists, or even an acquisition by Facebook or another company interested in business uses for virtual reality.

Strivr started earlier this year and is based in Palo Alto, California.