Watson is getting within Earshot.

IBM’s super-smart supercomputer, which has been undertaking a variety of job positions in its post-Jeopardy days, has no personality to speak of. But it is now helping social intelligence platform Earshot determine the key personality traits of social posts so brands can better target their messages.

Chicago-based Earshot offers a real-time Decibel Level scoring that computes a “relevancy score” between 0.1 and 9.9 for every social media post it detects. Using variables like location, keywords in the post, time of day, or demographics, the Level provides a single indicator of how well the poster matches the profile of a particular marketing campaign.

Now Watson is going to help with the sifting. 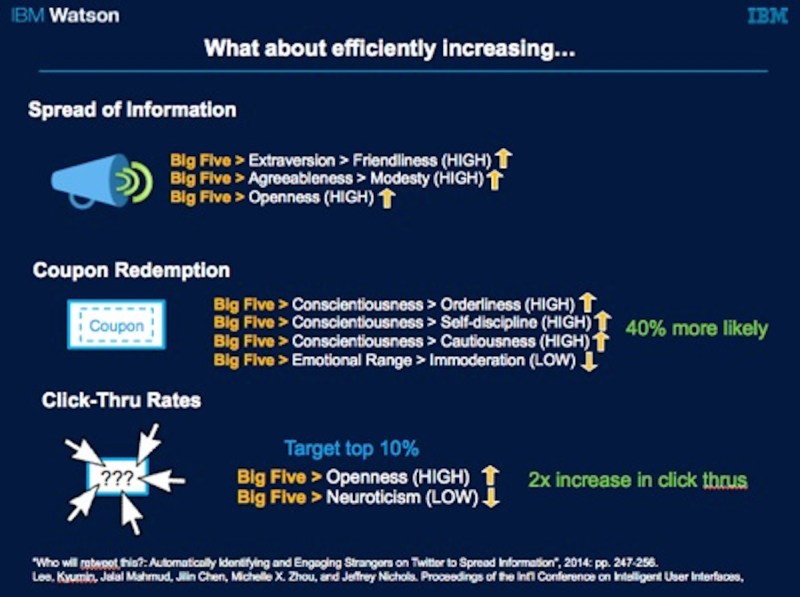 Above: IBM Watson’s evaluation of users

The supercomputer will take tweets or Instagram posts from Earshot via an API and return it with Personality Insights, employing a minimum number of posts to render a judgment. The social messages will be characterized for such personality traits as open, neurotic, or orderly.

IBM says that 4.5 percent more users who score high for openness but low for neuroticism click on an ad than general samples of users, and 4.1 percent additional users are more likely to follow a brand on Twitter.

If you’re a top scorer for orderliness, self-discipline, and caution but not so high on immoderation, you’re 40 percent more likely to want a coupon than other users. A sports gear company might be looking for adventurous types, while a campaign that wants to generate a viral campaign by targeting sharers would best look for users rated as highly open.

In addition to rating your personality, Watson will also identify large structures or places within posted photos. It might detect, say, a baseball stadium, a church, a wedding, or a BBQ in an image. Each of those enables a brand to better target a campaign — beer companies perk up at users posting about their BBQs, for instance — or to more accurately tune a user’s profile.

Watson also offers a highly refined Sentiment Analysis API, although Earshot CEO and founder David Rush told me his company is not yet employing that capability.

The personality and image characteristics help refine Earshot’s Decibel Level scoring, which is then used for what the company describes as its “precision-based marketing.”

Clients include Spotify, Nestle, Honda, Nissan, and IBM. Although Earshot doesn’t yet have analytics on Watson-enhanced efforts, it does say that its Decibel Level scoring platform “leads to higher [sales] conversions and longer relationships” with customers.

Rush said IBM has “told us we’re one of the first social media platforms to partner with them” for Watson-izing. It’s not an exclusive arrangement, he said, but “they approached us.” Among other uses, Watson is also helping to personalize travel and retail experiences.

He added that Earshot is a “close cousin” of social listening platforms like Crimson Hexagon, Brandwatch, or Radian6. But, Rush noted, Earshot is often used alongside them because it is focused on customer acquisition while they’re more oriented toward getting insights for detecting trends or informing marketing decisions.