Like a gratuitous salvo of locked-on missiles, Galak-Z: The Dimensional succeeds on multiple fronts. Glance at any screenshot and you could mistakenly assume that it’s just another arcade style shoot-’em up. It’s a much deeper shooter than that, as it’s a roguelike with a superbly retro anime VHS visual design that’s only matched by Far Cry 3: Blood Dragon.

Released on August 4 for the PlayStation 4 (a PC version is coming soon), Galak-Z is one of the most difficult games in recent memory, and the pleasure of beating it is also worth the pain of playing it.

Galak-Z follows the tradition of Western-developed games with anime sensibilities from Monolith’s Shogo to Climax’s Sudeki. This style greatly complements Galak-Z’s retro look. Protagonist and obligatory last hope for Earth, A-Tak sports the big 1970s hair and flared flightsuit that will be familiar to fans of old-school anime. It’s less of an homage to 8- and 16-bit gaming but more of a throwback to broadcast television at the height of Japan’s prosperity in the 1980s, right down to the light bleed from the glowing shine of the game logo. Less subtle are the freakishly accurate VHS tape-inspired menu visuals and game boot screen. Seeing forgotten initials like “SLP” and white fuzzy tracking distortion instantly and effectively conjures memories of using VHS tapes. It’s easy to marvel on how far we’ve come with recordable media that seeing this reminder of the past is almost unsettling.

Games structured as TV episodes isn’t anything new; two such games, Split Second and Alan Wake were both released on the same day, in fact. Arguably the greatest example of TV parody is found in Geppy-X, a Japan-only PlayStation shooter that includes opening and closing themes as well as commercial breaks at the halfway point of each episode. Galak-Z’s TV-influenced presentation isn’t as ambitious, especially when the character art and animation is more befitting of a Flash game. It’s a minor blemish for a game that features some of the best space combat this year. 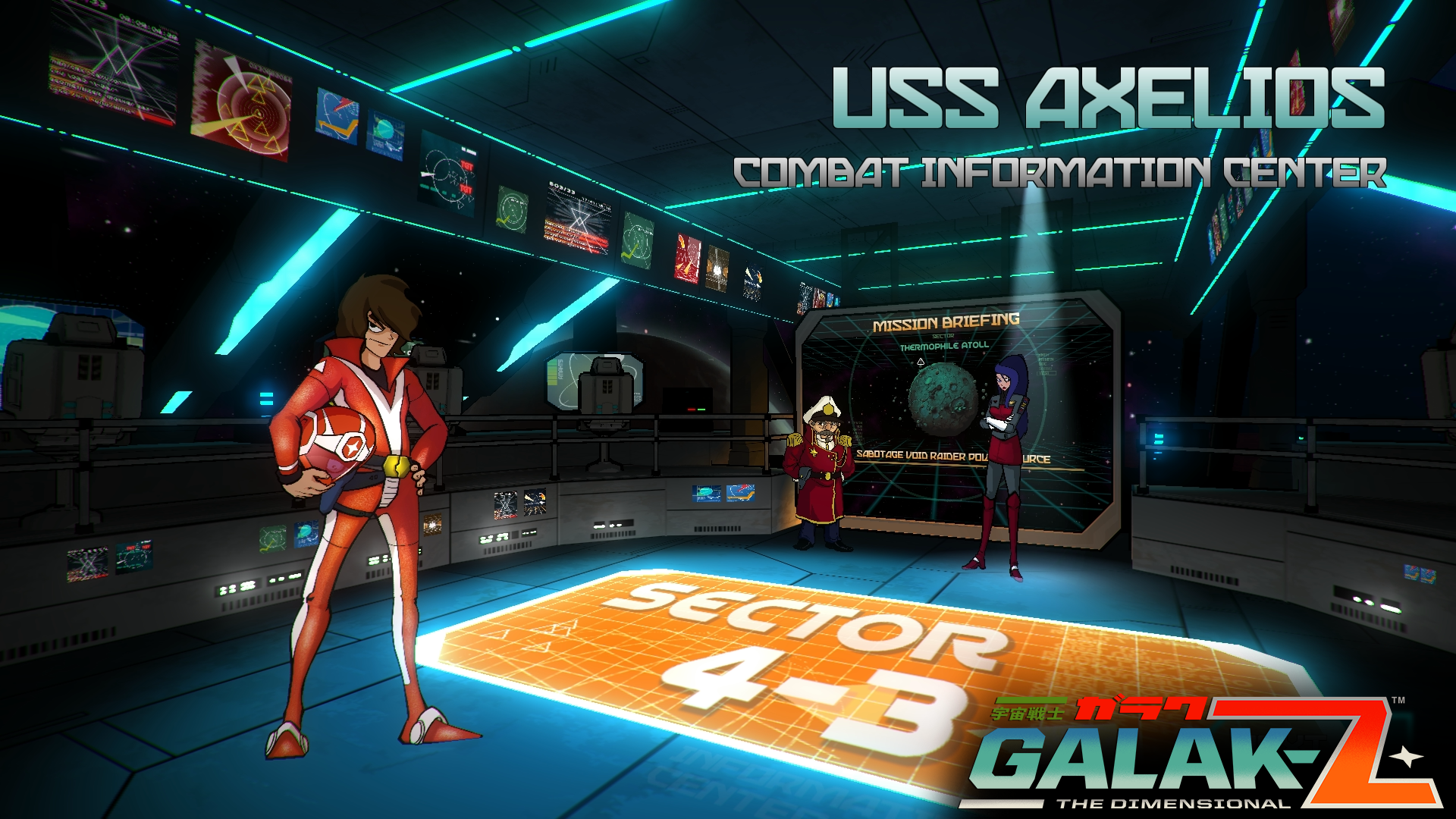 Above: A-Tak’s flared collar will be familiar to 1970s giant robot anime fans.

Despite not being a side-scrolling shooter, Galak-Z does scratch a particular compulsive component that the genre and roguelikes share. Some hardcore shoot-’em-up fans prefer to start their entire playthrough over if they lose a life in the first or second level. It’s tempting to do the same in Galak-Z; it can be disheartening to have your shields and missile supply reduced to half before the end of the first episodes. Galak-Z’s raised stakes stem from its checkpoint system. Some consider permadeath to be a mandatory feature in roguelikes. 17-Bit wasn’t so merciless to only give you a single life though it is conceivable that such a playthrough is possible. 17-Bit figured out an excellent compromise: permadeath works in TV season chunks; survive for an entire season and you won’t have to replay that season upon your next death.

In roguelikes, having the persistent presence of mind to anticipate all possible variables is crucial. In Galak-Z, it’s having environmental awareness, knowing the man-made and natural hazards, and trying to make educated guesses on what upgrades will be most useful in the next map. The unpredictability of the randomly generated levels in roguelikes is both its main draw and what makes such games so challenging. The randomness is not an exact science which is why you can luck out with an easy mission in Galak-Z and end up with a gruelingly hard sortie in the next episode. It’s not unlike Don’t Starve except the penalty for backing out of a chapter in Galak-Z is much more severe. The good news is that the sense of gratification of beating Galak-Z is as palpable as beating any above average roguelike like CounterSpy or Spelunky. And expect to devote at least 20 hours to reach the end. You might’ve played Einhänder or Gaiares for over 20 hours, but it only took you 5 hours to beat it the first time.

The one commonality that binds the two genres is the value of planning and resource management. Whether it’s Gradius or R-Type, getting any and every power-up does not necessarily equate to the best arsenal for every player. Intentionally avoiding specific enhancements is a skill in itself. In Galak-Z, managing your limited assets is crucial as is making wise power-up choices when you’re redeeming scrap you collect in the field. The obvious reward is that you get all the credit and personal gratification for your calculated decision-making, the degree of which you seldom find in shooters that only offer a handful of upgrades. 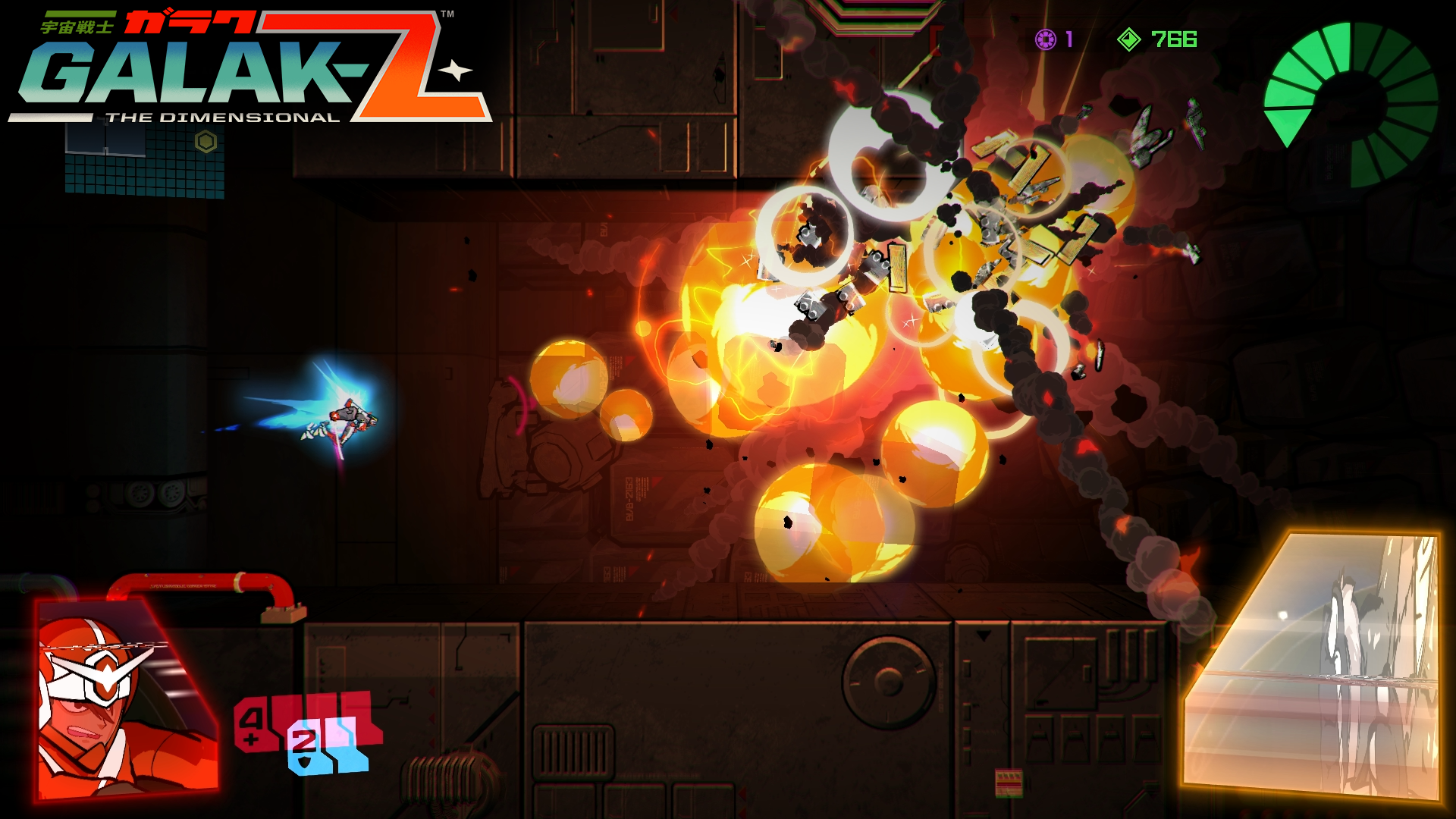 Above: How much you’re treated to Galak-Z’s spectacular explosions depends on how many missiles you have left.

Galak-Z is not a twin-stick shooter (as much as it looks like one), nor does it have a twin-stick control option. Do not even expect a twin-stick patch in the future. 17-Bit CEO and Galak-Z creative director, Jake Kazdal, has expressed his disinterest in this widely popular control scheme. While it does take many fans of 2D shooters out of their comfort zone, adjusting to Galak-Z’s control setup takes only a couple hours to get used to. Kazdal sees Galak-Z as a 2D form of Halo and Far Cry 3, a concept that I didn’t grasp until I was well into the second season. Not having a twin-stick control scheme is key to making those connections.

If you’re the impatient type, the challenge and dread of possibly repeating an entire season can be disheartening. The further you advance into a season, the more painful it is if you die before starting the next batch of episodes. Just when you thought the Souls series and its spin-off Bloodborne set the standard for pain tolerance, a game like Galak-Z arrives. Map randomization compounds the challenge, making things all the more difficult if this is your first roguelike.

Anime has a term for an excessive launch of missiles at a single target: the Itano Circus, named after Ichiro Itano, an animator who innovated the technique while he worked on the groundbreaking Super Dimension Fortress Macross series (think Robotech here in the States), the source of Galak-Z’s subtitle. 17-Bit knows its anime, as evidenced by its emulation of the Itano Circus and other visual cues.

Galak-Z: The Dimensional is worth the pain, but it involves a great deal of effort. Like its arcade ancestors, you can appreciate its high replay value well before you beat it the first time. Aesthetically, Galak-Z’s myriad retro inspirations manage to pull the heart strings of nostalgia while complementing a gameplay foundation that is wholly modern. Even if you associate contemporary side scrolling action by the sensory bombardment of Resogun, Galak-Z proves there are other ways to get a worthwhile and fresh shoot-’em-up fix.

It certainly made me reflect on my preconceptions and borderline sense of entitlement of initially wishing that this was more akin to the Thunder Force or Darius series.

Galak-Z: The Dimensional was released August 4 for PlayStation 4 for $20. 17-Bit provided a download code for the purpose of this review. 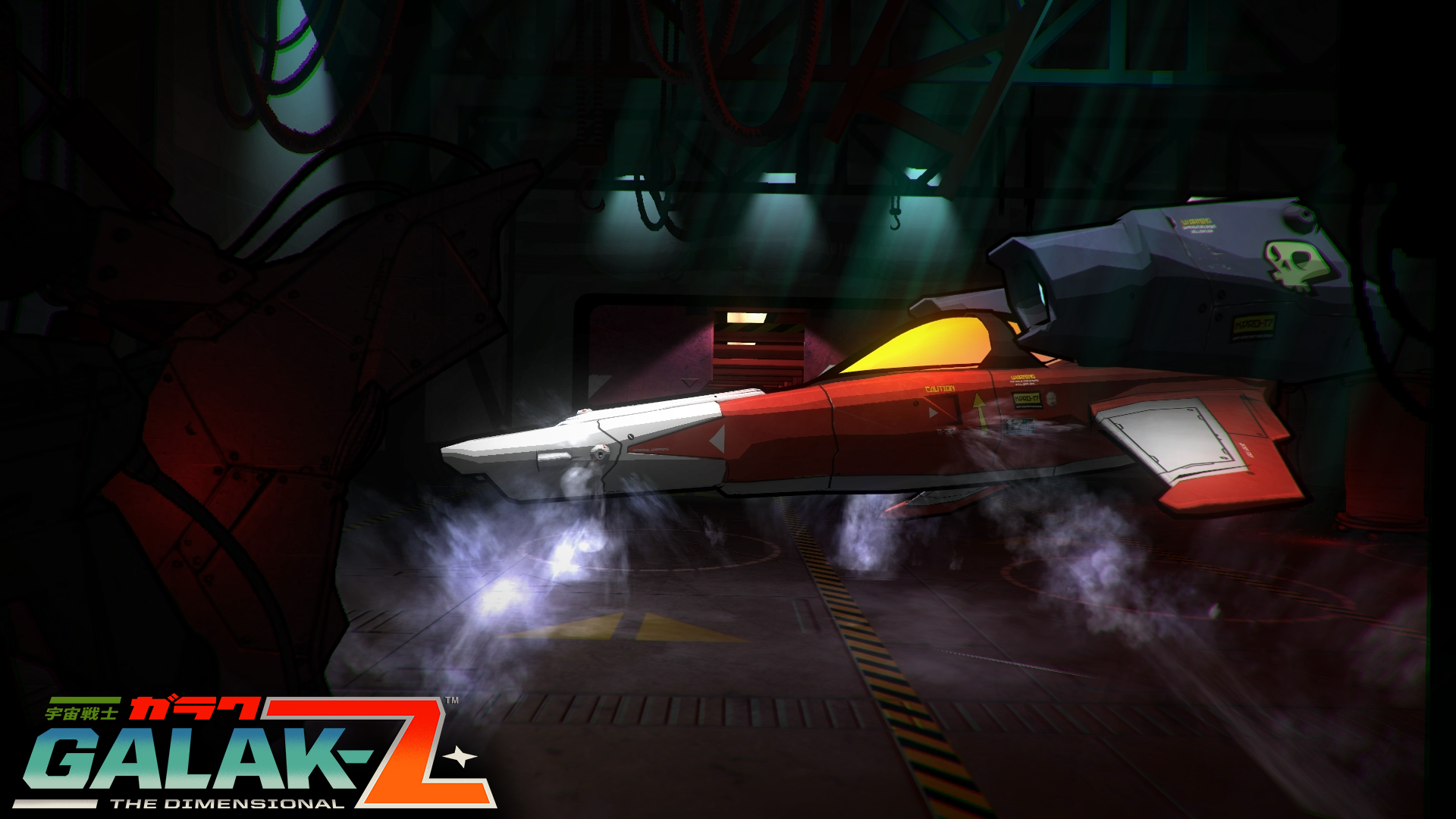 Above: It wouldn’t be a proper sci-fi retro anime without a dramatic ship launch from a tunnel.