Y’all are buying a lot of digital cards.

Digital collectible card games (CCGs) brought in $1.2 billion last year and should rise by another $100 million this year, analyst SuperData Research said in a new study released this morning.

The games, which offer players battles with custom-built decks of cards (think Magic: The Gathering), will continue to grow over the next couple of years, taking their place as a “dominant category” alongside massive online battle arena games (MOBAs) and other new genres, the report said. Blizzard Entertainment’s Hearthstone: Heroes of Warcraft leads the genre.

“Collectible card games have been tremendously popular for a long time, and in its transition to digital has managed to reach a massive audience,” said Carter Rogers, an analyst at SuperData. An estimated 37 million gamers play digital CCGs worldwide, the study suggests.

“It’s a fascinating category … because it combines micro-transactions with strategic, competitive game play. Collectible card games have remained popular through the years and will continue to be a source of inspiration for the industry at large.”

CCG players are overwhelmingly male, the study showed (80 percent), and the average age is 31. That makes them one of the most male-dominated gaming categories.

SuperData has been tracking CCGs since its founding in 2009, Rogers said. This latest study used a survey of 776 CCG players from May to June this year and an analysis of 256.5 million CCG transactions from October 2011 to June 2015.

Hearthstone leads the market by a wide margin thanks in part to its tie-in with Activision Blizzard’s other games, he said.

“The unprecedented success of Hearthstone compared to its peers is the result of Activision’s brilliant marketing machine and its ability to cross-promote its games unlike any other publisher,” Rogers said.

Hearthstone brings in about $20 million a month, with 8 million PC and 9 million mobile players, according to the report.

“Being able to build on a vast, pre-existing narrative economy allows both existing and new players to quickly find a touchpoint with the game, thereby establishing a different relationship compared to the majority of free-to-play titles currently available on iOS and PC,” Rogers said.

Above: SuperData’s chart of digital CCG market leaders from its recent report.

Blizzard’s rolled out new content at a savvy pace, as well, he said.

“The persistent rollout of add-ons and expansions cultivates a loyal following and, subsequently, higher earnings.”

That doesn’t mean other companies are snagging a share of the market. Electronic Arts and Bethesda are developing new CCGs, SuperData CEO Joost van Dreunen noted, and Wizards of the Coast is revamping its Magic: the Gathering game. Smaller companies, like Stoneblade (SolForge) and Tequila Games (Earthcore), are also finding success.

Smartphones will become the leading platform for digital CCGs next year, the company predicts, earning $532 million in 2016. Phone players spend less, but the audience is growing faster than PC or tablet platforms. PC players spend about 11 percent more on their games on average, and play longer.

“While currently card gamers spend more on PC than mobile, the sheer size of the mobile gaming audience makes it dominant platform,” Rogers said. “Especially when building a broader franchise, it is key to reach as many people as possible, which is something that mobile affords.”

Still, almost half of CCG gamers, 46 percent, play on more than one platform. While new games are commanding ever-larger audiences, SuperData expects revenue to grow by just 5% by 2018, hampered in part by players’ declining spending on mobile platforms and in part by the decline of card games on Facebook.

“We’re currently in a transition where social network-based card games are in decline, dropping from $96 million in 2013 to $30 million this year,” Rogers said, “and we see greater player numbers and spending on PC, which roughly doubled in that same period.”

Older games’ decline is also offsetting some of the growth, he said.

“Falling revenues from a handful of older mobile CCGs are having an outsize impact on overall revenues,” Rogers said. “Card games like Rage of Bahamut and Marvel: War of Heroes were some of the top-grossing mobile apps of 2013, but they’ve since declined.”

Overall, digital players account for more than half — 61 percent — of the world’s CCG market, the report said. Asia leads the digital market, closely followed by North America and then Europe. 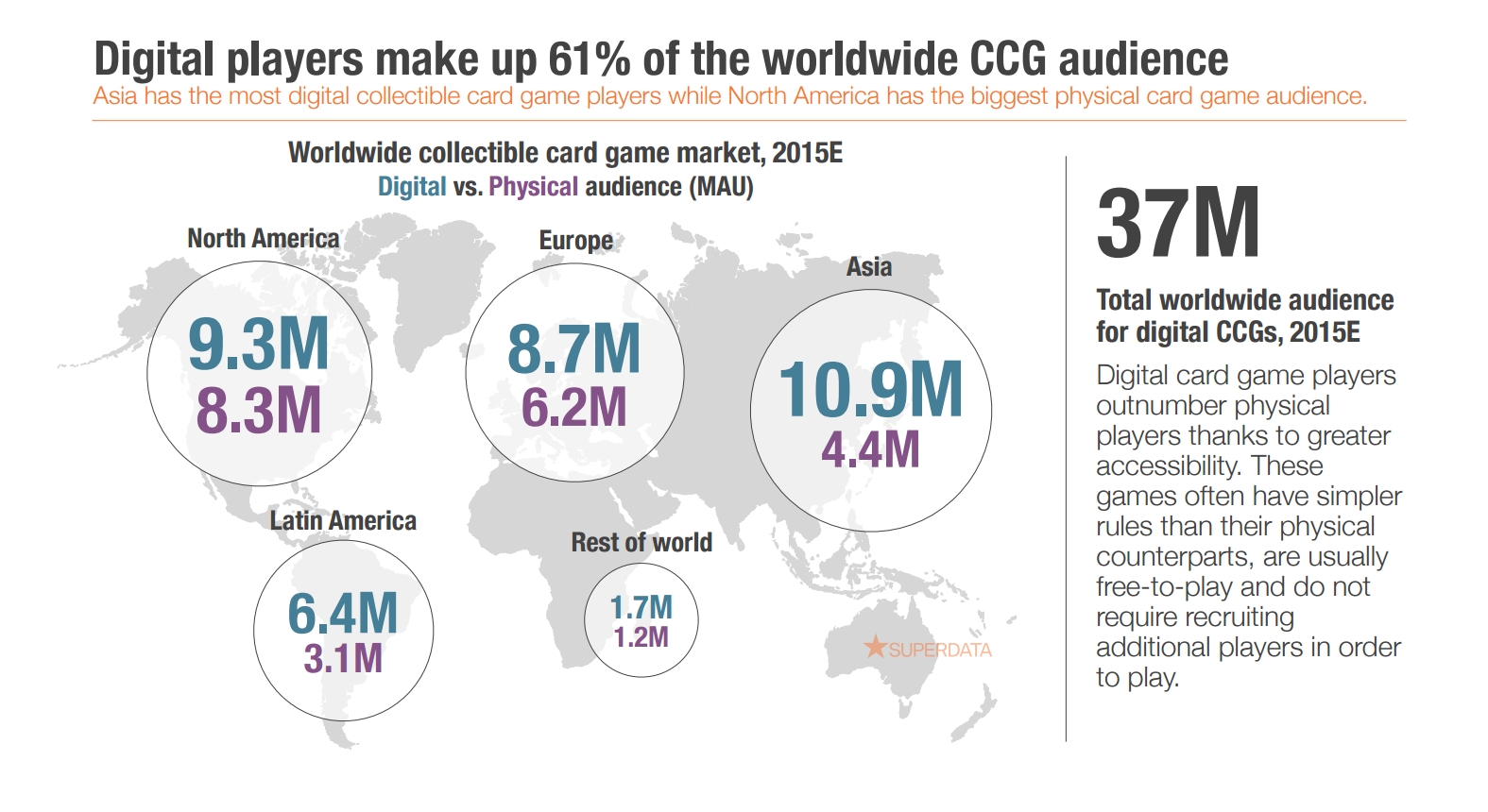 Above: The United States leads the world in traditional, physical CCG players, but lags behind Asia for digital gamers.