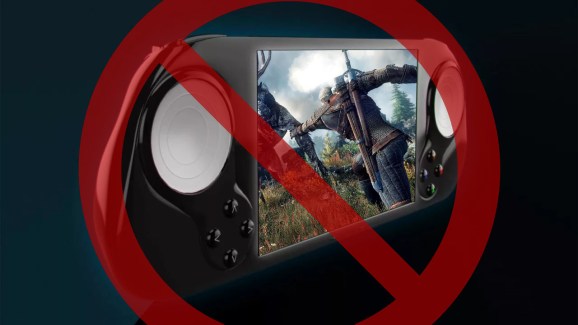 The Smach Zero simply won't have the power or the OS to play most modern 3D games.

The Valve-approved Steam Machine PCs have started going on sale, and one hardware manufacturer is already planning to jump in with a Game Boy-style handheld take on these console-like gaming computers.

At the Gamescom convention in Cologne, Germany last week, a company called Smach revealed that its Smach Zero portable SteamOS device — once known as the Steamboy — will launch in late 2016. But the hardware startup plans to start selling the Smach Zero for $300 on November 10 of this year. That’s an especially long time to wait for a PC gaming system. But the truth is that even if you got the system today, it wouldn’t come close to most gaming desktops and laptops on the market right now.

Here are the important specifications of the Smach Zero:

If you recognize what all of that means, you instantly know that the Smach Zero is not going to handle games like Far Cry 4 or The Witcher 3. This is for two key reasons: the processor and the operating system.

Let’s get SteamOS out of the way. A large number of triple-A releases simply don’t work yet on Linux, which is the kernel that serves as the backbone of Valve’s new OS. So something like Far Cry 4 won’t work because Ubisoft (and most other publishers) have made no promise to bring their games over to Linux or SteamOS. The Witcher 3 developer, meanwhile, has said that it may bring its latest release to Linux, but we’ll see if it follows through with that.

But the most important reason that you won’t have graphically intensive games running on a Smach Zero is because it just doesn’t have the power.

The portable includes the aforementioned G-Series “Steppe Eagle,” which is a system-on-a-chip (SOC) that combines the central processor (CPU) and graphics processor (GPU). AMD introduced this new line of chips specifically for smaller gaming and medical devices, but this doesn’t mean it is going to handle the latest releases.

To put this into perspective, it’s important to know that the top-of-the-line Steppe Eagle is equivalent to AMD’s Radeon 8400E graphics card or Nvidia’s GT 740M.

For more reference, here’s how the Radeon 8400E performs with several big games from the last several years, according to the benchmarking site Notebookcheck.net:

Put simply, the Smach Zero is probably not worth spending $300 on for big 3D action or adventure games. It will handle certain free-to-play games that scale well like Dota 2, but most people probably won’t want to play that on a handheld.

At the same time, this kind of performance is reasonable for a $300 device that fits in your hand and comes with a built-in screen. Ideally, you wouldn’t even want to play games like The Witcher on something like this because you wouldn’t get to appreciate their full beauty (or even read their tiny text).

Instead, the Smach Zero seems like a device designed for simpler, 2D indie releases or older releases that online stores like GOG have updated to run on Linux. Games like the Metroid-inspired Axiom Verge or the Rouge-like Spelunky come to mind, or how about having role-playing classics like Icewind Dale or Baldur’s Gate II running perfectly on the go in your pocket. Essentially, you’ll get every major 2D indie release on this system long before a dedicated console handheld like the PlayStation Vita, and you’ll also have the capability to boot up a lengthy list of Linux-compatible classics. And that might make the Smach Zero worth the cash.