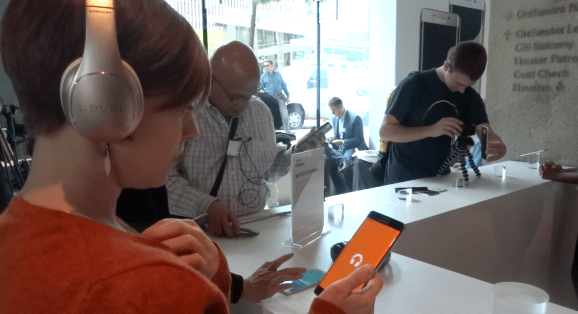 The Galaxy Note 5 features a slightly curved back that’s supposed to fit the palm of your hand, and metal trim. It’s also slightly smaller than the Note 4 and sports a 5.7 inch display.

Most notable is the redesigned stylus — it’s much more precise than its predecessor. Samsung also tweaked the user experience so you can pop the stylus out of the phone and immediately start writing on the locked screen.

The Note 5 also has an expanded screen capture feature so you can grab images beyond the capacity of your screen. To use it, take out the stylus, select “screen write,” and then hit “scroll capture” at the bottom of your screen. The phone will then prompt you to either capture more or save the picture to your gallery.

Overall, you’ll notice improvements to the Note 5 camera. The back of the phone has a 16 megapixel camera, capable of shooting 4K video. This camera also has image stabilizing technology and quick launch features. Double tap the sensor on the front of the camera and take a bunch of selfies in quick succession.

In addition to new hardware, Samsung also debuted its Live Broadcast feature. The app hooks into YouTube Live so you can livestream to your friends and family. Think of this as Samsung’s Periscope play.

The S6 Edge Plus has many of the same features as the Note 5, like expanded screen capture and live broadcast. It has some new features, as well, giving you the ability to scroll through your favorite apps and contacts by swiping left on the home screen, for example.

Samsung was really pushing its wireless charging station, which will give the phone a full charge in just two hours. Of course, your Samsung will charge 30 minutes faster if you actually plug it in.

In short, both the Note 5 and the S6 Edge Plus updates are focused on improving the user experience — likely to challenge competitor Apple. You can find both Samsung phones in U.S. stores starting August 21.