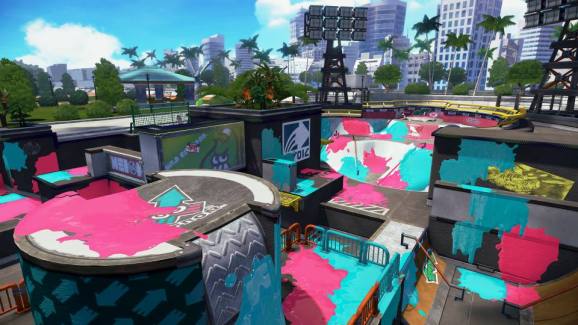 Nintendo’s ink shooter has given some life to its Wii U console.

The publisher revealed that the home gaming system’s software sales are up 10 percent through the first seven months of the year compared to the same period in 2014. Games like Mario Kart 8 and Super Smash Bros. for Wii U continue to find an audience, but the surprise star is Splatoon. The home console gaming market is worth billions of dollars, and Nintendo has given up much of its share of that to its competition from Sony and Microsoft. But Splatoon is one of the few bright spots for the company as it prepares to transition into a new era — one in which it plans to embrace mobile games and release a successor to the Wii U called the NX.

“Much of [Wii U’s software] growth can be attributed to Splatoon, which inked nearly 85,000 total units in its third month to bring its lifetime total to nearly 540,000 total units in the United States alone,” reads a Nintendo press release provided to GamesBeat. “As of June 30, the game has sold more than 1.6 million total units around the world.”

While Splatoon continues to deliver an impressive performance for the Wii U, Nintendo also noted that its handheld business is also doing well.

“Through the first seven months of 2015, sales of Nintendo 3DS hardware have increased by nearly 35 percent over the same time frame in 2014,” reads the press release.

The company is hoping to keep that momentum as it finishes out 2015 with releases like Super Mario Maker, Yoshi’s Wooly World, and Star Fox Zero for the Wii U and Animal Crossing: Happy Home Designer, The Legend of Zelda: Tri Force Heroes, and Yo-Kai Watch for the 3DS.