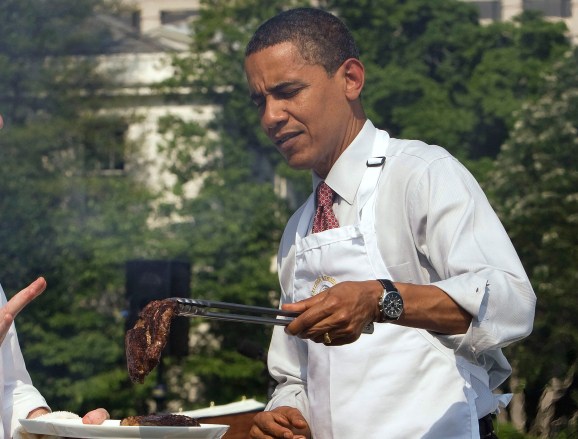 The White House inaugurated its account on the music streaming service with a two-part summertime playlist — one for daytime, one for nighttime.

The Slow-Jammer-In-Chief has a track record for decent taste in music, and he doesn’t disappoint here. That’s a relief because 2015 is the first year in recent memory with no clear winner for “Song of the Summer.”

First up is the daytime playlist:

A few too many “obvious” songs here — call them crowd favorites if you want, but picking greatest hits is a sign of weakness. There are hundreds of R&B songs just as infectious as “Ain’t Too Proud To Beg,” so please spare us the hundredth repeat play, Mr. President.

Otherwise it’s a decent mix of uptempo songs perfect for a barbecue. There are two songs with an explicit warning, so you know he’s still a “cool dad.” The President missed a huge opportunity by not including a Joey Bada$$ song.

The only real outliers here are Coldplay and Florence & The Machine. Both are anthemic stadium rattlers, but they’re also a total snooze. They’re out of place and make the whole thing feel like a Starbucks-approved store playlist.

After ending the day with a hectic salsa tune, Barry dims the lights, changes clothes, and slams the brakes for nighttime:

This half is infinitely stronger. Obama gets more points here for at least attempting the deeper cuts.

The first five songs are a bulletproof, though there are way better Van Morrison options. Skipping track six (assuming it’s a total mistake), a brilliant Lauryn Hill and D’Angelo duet leads us into the muted back half of the playlist; Joni Mitchell, Otis Redding, and Nina Simone keep things kind of blue until Miles Davis shows up.

According to the White House, we can expect more of this in the future. The announcement also hinted at “issue-specific playlists” — which sounds like a terrible idea, because Pink Floyd’s “Money” is one of those “obvious” songs and will probably be on all of them.

Meanwhile, Mike Huckabee is available to jam at your backyard barbecue.