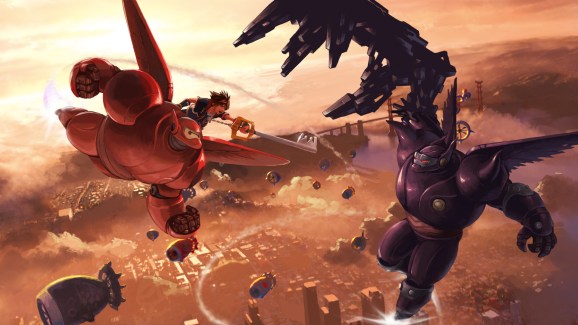 Concept art for the Big Hero 6 world in Kingdom Hearts 3.

Developer Square Enix revealed that Kingdom Hearts III will have a world based on the popular film Big Hero 6. The movie is about a gang of young superheroes in the fictional city of San Fransokyo. Players will fight against an evil version of Baymax, the adorable robot from the film. Square Enix showed a piece of concept art where Sora was fighting a giant Baymax clad in black armor. The story will take place after the events of Big Hero 6.

The announcement shows that Disney still believes in “transmedia,” and it is accordingly making good use of its new entertainment franchises by incorporating them into its lineup of video games.

The stars of the Kingdom Hearts action role-playing series have fought countless battles over the past decade in various console titles and spin-offs. They travel through different worlds based on Disney movies and meet characters from Square Enix’s Final Fantasy games. But Kingdom Hearts III marks the first time players will see the heroes on PlayStation 4 and Xbox One.

The last time a new entry in the series came to consoles was in 2005 with Kingdom Hearts II. The franchise has sold more than 21 million copies since its launch in 2002.