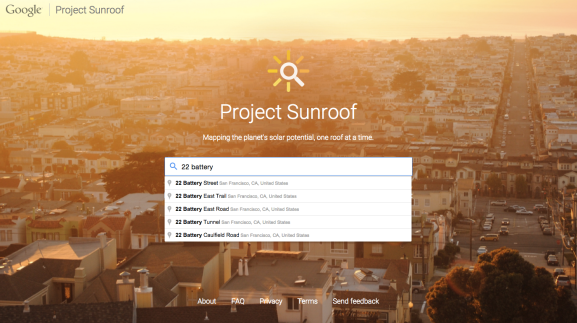 Google has released a new online tool called Project Sunroof, which you can use to look up an address and find out about the potential for solar energy collection at your home.

You can try it out now. I just tried it out and learned from Google that my home receives “1,798 hours of usable sunlight per year” and has “968 square feet available for solar panels.” Google calculated that I could save $13,000 if I were to take out a 20-year lease for solar panels. Google recommended a 4.5 kilowatt install in order to cover 99 percent of my energy needs.

This is just the latest unusual but helpful project to come out of Google, which has been installing solar panels to cover its own energy usage for years. In 2007, the company “installed the largest corporate solar panel installation of its kind — 1.7 MW at our Mountain View campus,” Google stated on its website. We’ve grown the size of the system to 1.9 MW, and it generates enough electricity to power 30% of the peak load of the buildings on which it sits.”

Now Google is making it easier for consumers to figure out the benefits of installing solar panels at their residences.

And check out this video about the program: