You might have noticed former Florida governor Jeb Bush hailing an Uber or flashing an Apple Watch. Or Sen. Rand Paul (R-Kentucky) opening up a San Francisco field office to scout new donors and volunteers.

But campaign donation disclosures — the FEC and the Center for Responsive Politics both have great tools for seeing where the money goes — show the feelings aren’t exactly mutual. Despite Republicans’ highly publicized efforts, most tech luminaries are throwing dollars at Democratic frontrunner Hillary Clinton.

(We’re still very early in the process, so these numbers will really get interesting once the money starts pouring in. Stay tuned — we’ll be posting updates as it does.)

Political spending in Silicon Valley tends to skew Democratic. According to 2012 campaign contribution data that Nate Silver compiled, then-Sen. Barack Obama received 97 percent of all donations that Google employees made — $720,000 compared to the $25,000 that Mitt Romney raised. Obama also took 91 percent of the cash given by Apple employees and 89 percent from eBay workers.

Per FEC: Only one current HP employee and one board member have donated to Fiorina's presidential campaign.

Ouch. That might be because Fiorina’s tenure at the company is widely regarded as a disaster.

Sen. Marco Rubio (R-Florida) lined his pockets with some Oracle money thanks to a fundraiser that former CEO Larry Ellison held in his California home. But Rubio also appears in FEC disclosures as a long list of refunds. That’s because when Rubio announced his presidential campaign in June, checks that were earmarked for his Senate campaign had to be returned unless donors specifically agreed to transfer their contributions. Politico reported that more than 300 donors to Rubio’s Senate campaign declined to do so — Elon Musk, Mark Zuckerberg, and Sean Parker among them.

(For Parker and Zuckerberg, that could be due to an unwillingness to get involved early. In Musk’s case, it might have more to do with the Zuckerberg-founded FWD.us committee that Musk quit.)

PACs can receive an endless supply of cash, but individual donations are capped at $2,700. This might seem like a paltry figure, given the eye-popping portfolios of tech CEOs and investors. But it’s an interesting glimpse into how these execs give their money.

So let’s take a look at how some of tech’s biggest names are donating their dough.

Eric Schmidt, Alphabet chairman and prominent shower disruptor, has given no money to a 2016 presidential candidate yet, but he did support Democrats Howard Dean in 2004 and Joe Lieberman in 2000.

Zuck is a bit harder to pin down. The Facebook founder and CEO has not given to anyone in the 2016 presidential race.

In the past, he has hosted fundraisers for New Jersey Gov. Chris Christie, appeared onstage with Utah Sen. Orrin Hatch, and recently donated to Rubio and Rep. Paul Ryan — all Republicans.

He is a known advocate for immigration reform. He met with Rubio in 2013 to discuss immigration reform after his political advocacy group FWD.us funded a television ad supporting a bipartisan approach. Rubio supports a path to citizenship for undocumented immigrants.

Zuckerberg has also cozied up with Democrats like Barack Obama, Nancy Pelosi, and Chuck Schumer.

If anything, Zuck is just supporting winners. Speaking to the New Yorker, a reporter for the Center for Responsive Politics explained:

Here is a sampling of Zuckerberg’s other donations: 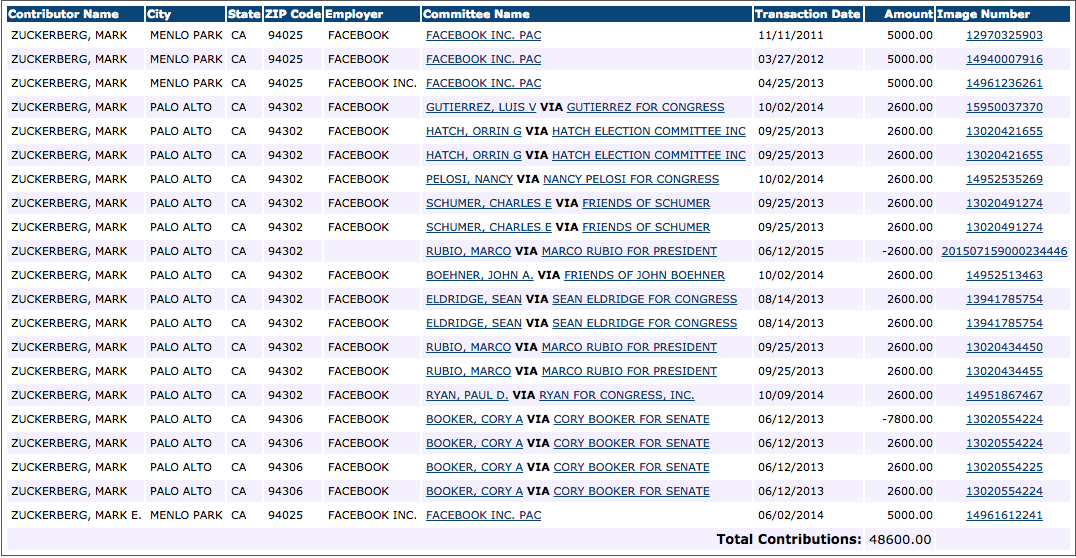 Silicon Valley’s libertarian godfather has also stayed out of the race thus far, but he ostensibly bankrolled Ron Paul’s failed 2012 campaign through a number of PACs. Just look at all those zeros:

The CEO of Tesla Motors and SpaceX made two separate contributions totaling $5,000 to Hillary Clinton’s campaign, according to FEC disclosures. He is also one of the largest individual donors of anyone sampled in this article. His individual contributions, dating back to 2003, total $389,650.

Musk was among those who received a refund from Marco Rubio’s campaign.

According to records, Pincus has given the maximum $2,600 donation to Hillary Clinton’s campaign. In 2013 Pincus and his wife, One Kings Lane CEO Alison Gelb Pincus, also made substantial donations to the Democratic National Committee totaling more than $97,000.

Yahoo CEO Marissa Mayer has not yet made an individual contribution to a presidential candidate. She has made a $5,000 donation to her company’s PAC, which has given 52 percent of its money to Republicans and 48 percent to Democrats.

In the past, she has given more than $100,000 to the Democratic National Committee and has hosted high-profile fundraisers.

Speaking to Fortune in May, the venture capitalist said, “I’m really struggling between the anti-science party and the anti-economics party. I’m highly tempted to sit this one out. I don’t know what I’m going to do.”

He appears to be sticking to his word. Despite actively supporting a few congressional campaigns, Andreessen has not made any individual contributions in the 2016 presidential race.

In the past, he has supported candidates on both sides of the aisle — Al Gore in 2000 and Mitt Romney in 2008. He also made contributions to Obama For America, which appear to have been refunded.

The Napster billionaire is known to spend money on both sides of the aisle, even when that results in his money fighting against his own money. According to federal filings, Parker has been active in a number of Congressional races but hasn’t yet made contributions in connection to the 2016 presidential race. 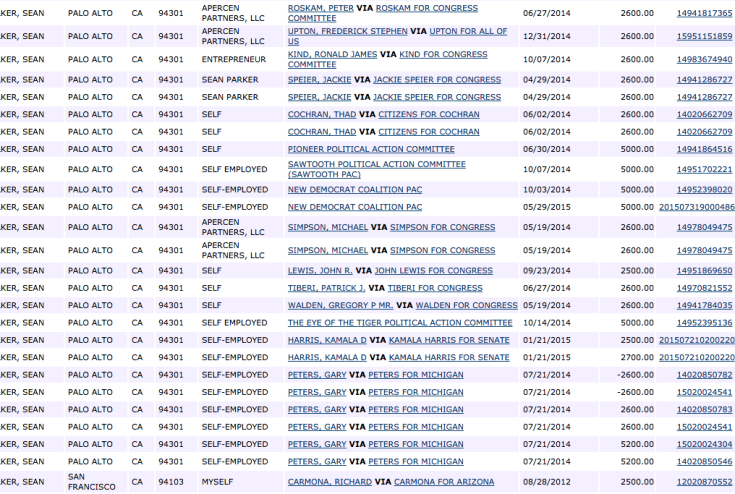 The day after donating to Hillary Clinton, Sandberg also donated $30,000 to Women Vote!, an arm of a PAC that aims to elect pro-choice female candidates into office. Levie later agreed to host a fundraiser for Clinton.