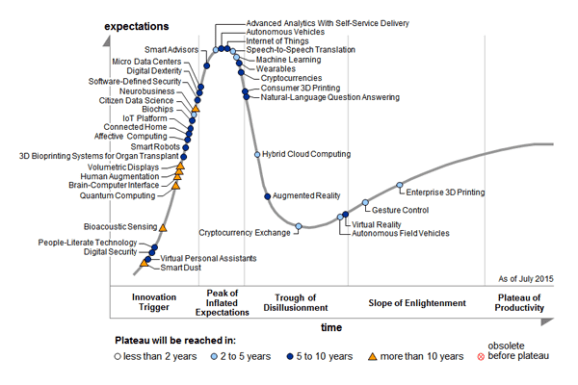 Basically, the notion is that in the world of technology, people tend to get over-excited about new thingies, and then are disappointed when the new thingies don’t change the world in the blink of an eye.

But after that, some of the thingies do actually change the world, given the right evolution and path and some patience. This is where things actually get interesting, if you don’t give up on them.

In other words, it’s the basic lesson that Silicon Valley refuses to learn. Over and over again. Even though everyone in Silicon Valley knows about the Gartner hype cycle. But hey, I’m not judging.

Anyhoo, Gartner has released its latest hype cycle report this week. Dubbed, “The Hype Cycle for Emerging Technologies,” it contains fun categories like “peak of inflated expectations” and “trough of disillusionment.” I would have gone with “Pit of Despair,” but, whatever.

In any case, here are the five at the top of the “peak of inflated expectations” (aka, totally over-hyped):

1. Autonomous vehicles: Damn straight. Every day comes some breathless account of driverless cars. We get silliness like people asking whether these things will disrupt Uber? Well, save your breath. It will take years for this technology to actually be reliable, and probably decades for people to adopt them. Remember, after 15 years, hybrid cars are only 3 percent of all car sales. How long do you think it will take people to switch to driverless cars?

2. Advanced analytics with self-service delivery: It sounds nice, right? A kind of DIY big data, without all the other annoying third-party vendors? Well, not so fast. Going to take some time before you have tools that are as robust as people who specialize in this stuff.

3. Internet of Things: I have mixed feelings about this. On the one hand, if I get another pitch for a smart dog collar or a connected fork, I think I’m going to start vomiting blood. On the other hand, I’m probably of the same mind as Tim O’Reilly, the Silicon Valley guru who thinks over time this could be the most disruptive technology in decades, once it’s widely deployed.

4. Speech-to-speech translation: Skype demo-ed a version of this earlier this year that lets you talk in one language and Skype will translate it into text and voice in another language. At last, the universal translator that Star Trek has been promising us for four decades. Alas, it’s not coming anytime soon, nerdlingers. For now, stick to learning Klingon.

5. Machine learning: No, computers aren’t learning that fast. No Skynet-like takeover on the horizon. You’ll just have to settle for god-awful Terminator sequels.