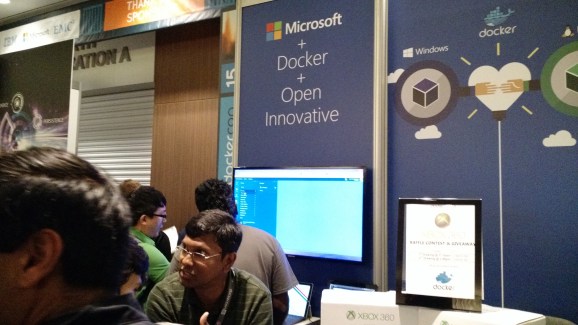 Microsoft's booth at the 2015 DockerCon conference in San Francisco on June 23.

Microsoft today announced the availability of the third technical preview of Windows Server 2016 software for virtualizing servers in companies’ on-premises data centers. This preview is significant because it’s the first time Microsoft is providing an implementation of its technology for running applications in containers instead of more traditional virtual machines.

“Windows Server Containers create a highly agile Windows Server environment, enabling you to accelerate the DevOps process to efficiently build and deploy modern applications,” Microsoft Windows Server and System Center corporate vice president Mike Neil wrote in a blog post. “Through this release, millions of Windows developers will be able to experience the benefits of containers for the first time using the tools of their choice — whether .NET, ASP.NET, and PowerShell or Python, Ruby on Rails, Java and many others.”

Microsoft first laid out its plans to bring containers — which San Francisco startup Docker has popularized in recent years — to Windows Server last year. Now this technology is available to test out.

This is important because Windows Server is one prominent choice for software companies can use to run many applications on a single server, so container support is an important addition. (VMware has also partnered with Docker to enable the deployment of containers in VMs.) But beyond that, Docker has been primarily a Linux technology — that is, until Microsoft came along to make containers a first-class citizen in Windows.

A Docker command-line interface became available for Windows PCs earlier this year. Windows Server, of course, is a version of Windows that runs atop servers.

A later Windows Server 2016 preview will add support for Hyper-V Containers, a feature that Microsoft first talked about in April.

Hyper-V Containers are “a second container deployment option that will provide higher isolation using an optimized virtualization and Windows Server operating system that separates containers from each other and from the host operating system,” Neil wrote today. “This higher level of isolation expands the possibilities for deploying containers in lower trust or mixed operational environments where developers may not have control of the platform.”