Microsoft today is introducing a major new capability to its Bing Search app for Android. Now when you want more information on the people, places, and things you’re reading about, you can hold down the home button to get contextual information and take related actions courtesy of Bing, without switching apps.

That feature might sound vaguely familiar. That’s probably because, back in May, Google previewed Google Now on Tap, a feature in the forthcoming Android Marshmallow operating system that lets you get context from Google about the things you’re currently looking at onscreen.

Marshmallow isn’t coming out until this fall, so in a sense Microsoft has outdone Google in releasing this sort of thing to the world.

Indeed, Microsoft search general manager Ryan Gavin recognizes that this is “directly parallel to a lot of what you saw with Google Now on Tap.” But, Gavin characterized this as a starting point for the company’s efforts to do more with everything it knows about the world. 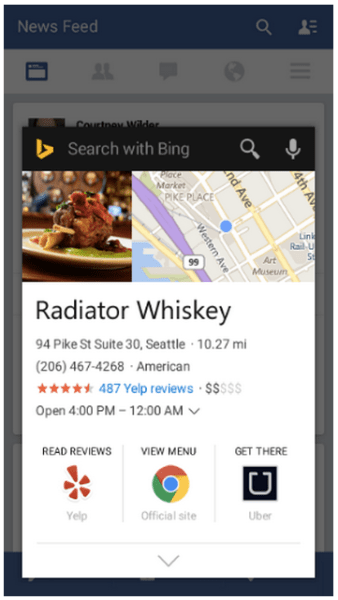 Above: When the Bing Search app is installed on your Android device, you can now surface knowledge from Bing about whatever you’re currently looking at, without leaving the app you’re in.

Microsoft today is also announcing a new Bing knowledge and action graph application programming interface (API) that developers can use to integrate Bing’s smarts into their apps. Check out my separate post on that new API here.

But that’s for programmers, while the updated Bing Search app on Android — which has 1-5 million installs — is for anyone, really, even if Microsoft is describing the app as a demonstration of the API’s powers.

Now you could be looking at a picture of a beach on Instagram on Android and get a high-level overview of the beach town named in the photo caption, courtesy of Wikipedia. Or you could be looking at the homepage of a restaurant and quickly bring up reviews from Yelp. It’s plain old convenient to not have to jump out of one app and into another and then go back later.

And if things work out the way Microsoft is hoping, this will result in people depending on Bing a lot more heavily. 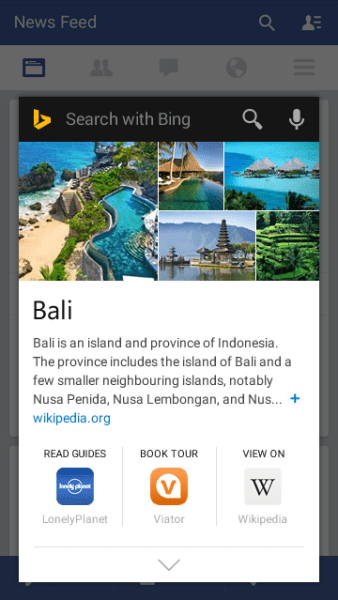 Above: A card from the Bing app popping up within the Facebook app on Android.