Mobile messaging giant Line has launched a new standalone app that allows friends to share their current location with each other in real-time.

Line Here for Android and iOS adopts a map-based approach, with group members able to view each other’s position in real-time. It’s similar to the likes of Glympse, an app that’s perhaps better known for individual location-sharing, but which also offers a group feature.

For the uninitiated, Line is a Japan-based company that rose to prominence as a WhatsApp-style messaging app back in 2011, and today claims north of 200 million monthly active users (MAU) in more than 200 countries. However, more than half of these exist across just a handful of countries in Asia. 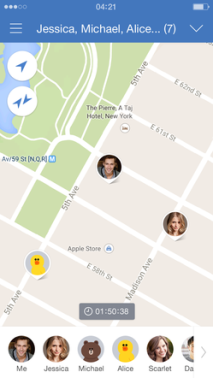 In terms of how people might use Line Here, well, there are a myriad of potential use-cases. Groups of friends who are all meeting up at a pre-arranged time can see where everyone is in real-time, and based on this information someone may decide to stay at home for 10 minutes longer rather than waiting outside in the cold. Or, a parent can track their kid’s whereabouts on the way home from school.

Similar to Glympse, Line Here also lets users set a time limit for how long locations are shared. It can be turned off instantly if they want to hide their  location, and then turned back on again. The app also lets users share their location with those who don’t have a Line account, by sharing a URL.

Line Here is the latest in a long line of offshoots, add-ons, and standalone products to emerge from the Japan-based company. Indeed, today the company offers games and camera apps, mobile payments and even an Uber-esque etaxi service.

Earlier this week, Line launched a new ‘Lite’ version of its mobile messaging app, designed to bring the core features of the main Line app to markets where networks may be slower or smartphones less powerful.

Line Here is a potentially useful service, though some may argue that it would be better offered as a feature within the main Line messaging app, given that people already use Line to make arrangements and chat to buddies.

However, Line clearly sees real-time location-sharing as a big enough market to merit a standalone service.