For players who don’t like spending their nights reading about how to get better at something, multiplayer games like League of Legends or Street Fighter IV can sound a little daunting. But as multiplayer games continue make themselves accessible to a wider audience, they’re starting to try something new: distancing players from each other.

Recent multiplayer game now have “creeps,” or A.I.-controlled units that run around the battlefield during a match. Creeps generally act as fodder for players; in some games (like League of Legends), killing them makes you stronger, and players better at killing them can earn an advantage. Having something to attack, even if it’s not the enemy, can make players feel like they’re part of a much larger conflict, since they don’t spend every second of their day hunting down . It can give games scope while acting as a way for players to contribute to the game without facing other players directly.

Though games like League of Legends and the original Defense of the Ancients popularized the concept of creeps, they’ve begun appearing in games that aren’t multiplayer online battle arenas (MOBAs). Titanfall, the mech-based FPS from Respawn (made up of former Call of Duty developers), introduced the concept to mainstream shooters. In Titanfall, killing creeps isn’t as valuable as killing players, but a player dedicated to hunting down these units can contribute to winning the match while avoiding enemy players. Titanfall appealed to FPS novices in a number of other ways, and focusing on creeps wasn’t the most effective way to win games, but the creeps had their purpose: to ease players into a competitive online environment.

Now, other games have started to catch on.

Though many of these games didn’t have their first showing there, this year’s E3 demonstrated how popular creeps have become in the public gaming consciousness. We saw more in-depth looks and trailers of Battleborn, a third-person game from GearBox that takes a number of concepts from MOBAs and integrates them into a shooter. For Honor, announced at the show, takes more inspiration from Dynasty Warriors and Chivalry than MOBAs, but the result is the same: creeps, which in this case are regular enemy soldiers, act as both an objective to complete and something to do when you’re not fighting other players. Even Halo, the epitome of competitive and direct player-based aggression, now has both creeps and boss enemies.

In Halo 5, for example, creeps and bosses are part of a shift toward more prominent and contextualized objectives. Most of the time, the goals in shooters exist to facilitate more confrontation between players, to find new ways for teams to fight each other when they got bored with deathmatch. Capture the Flag funnels players to certain parts of the map; Oddball has everyone targeting holding a skull to grab it for themselves.  But having to fight a boss enemy in the middle of a multiplayer match does more to change the nature of a game like Halo than any of these modes. As a third “faction,” bosses allow players to shy away from each other.

It’s possible that League of Legends’ enormous 30 million-strong player base has coaxed publishers into catering their games for the esports crowd. It’s certainly a lucrative proposition, assuming it’s the right call. But trying to capture the MOBA playerbase directly might not the be the best idea, says David “LD” Gorman, a Dota 2 commentator who has seen the game’s scene evolve over the course of several years. The MOBA market is predominantly made up of PC games.

“If [console publishers and developers] want to reach the market that MOBAs have, then there needs to be a PC version. Twitch did an interesting visualization of this — the Dota audience is one of the most segregated audience compared to any of other of their big games, like League of Legends, Counter-Strike: Global Offensive, Hearthstone — Dota [in particular] is its own little island,” Gorman said. “It makes it harder to connect more casual fans to it . . . But I don’t think that they need to reach that audience, necessarily, and I don’t know how feasible it is.” 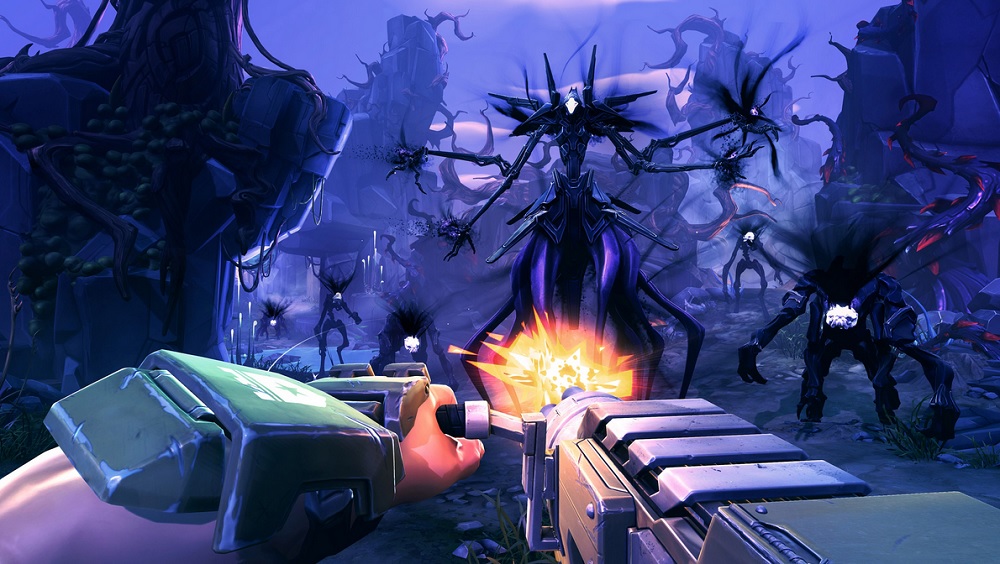 Above: Battleborn has you fight more than other players.

If these games’ publishers are in fact chasing MOBAs, they might also be a little behind; though they’ve certainly been more passive affairs in the past, MOBAs are headed in the other direction, increasing the amount of time players spend fighting each other directly. Dota 2’s most recent patches have encouraged players to fight each other by reducing the gold gained from creeps and increasing the gold gained from killing other players. Heroes of the Storm, the most recent notable MOBA, removes many of the aspects stopping players from fighting each other and focuses of having teams fight each at special map objectives several times over the course of the match.

It could be that both genres are converging toward a center. Perhaps there’s a sweet spot between a simple round of deathmatch and having various interlocking systems at work at once. And even if they’re not chasing esports, adding more “single player” elements to these games, again, serves to entice people afraid of confrontation.

The problem with introducing these concepts is that they feel like more a stopgap than a solution. Although some players can have fun killing creeps instead of fighting people, they still exist in a competitive ecosystem. Even it a game offers several ways to contribute to winning, confronting players directly is usually the best way to win, so they may at some point begin facing the challenge of other players or risk losing interest. They still face the risk of being entirely outmatched by someone who’s decided to spend most of their free time on a single game.

Adding more objectives could work as a great way to transition players into competing, but it could also serve to further push players out of multiplayer games. Adding these systems tends to make a game more complex; players might then be even more likely to avoid the game since it would still not solve the problem of confrontation, and now has a higher learning curve. So they’ll still end up being too intimidating to get into, putting designers right back where they started.

But is the issue the intimidation people feel from some multiplayer games isn’t the confrontation with other players but the emphasis many of them put on results? Most multiplayer games keep track of kills, deaths, assists, score, and so on over a long period of time. Because the game keeps track of all this, players can see themselves playing better, getting them to spend more time in their game of choice. But this emphasis on stat-tracking also keeps away people who don’t do well and get turned, or who face players who will use their stats harass them for playing poorly. The act of playing the game can still be fun, and many players play for that reason alone.

The split will still be there, and it’s a hard problem to solve. Creeps may be a stopgap, but remove stats entirely and it could make it difficult for the game to matter to players who want to see some tangible form of progress. If that is indeed the issue, it will take a more careful solution to get new players into multiplayer games. Games like Rocket League seem to have found a great balance between being welcoming and competitive.

For now, however, the creep stopgap might just work. If it introduces new players to genres they might not know they like, creeps will have done their job. The desire to complicate objectives also shows that multiplayer games are moving beyond the common deathmatch refrain, which should open games up to more creative ways to get two teams to fight each other. Personally, I’m still wondering what creeps would look like in a fighting game.