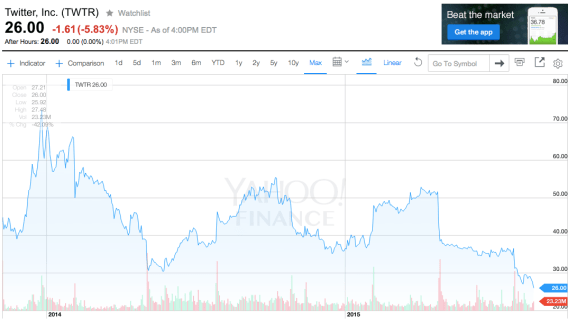 Twitter's stock fluctuation in the past couple of years, courtesy of Yahoo Finance.

Twitter stock today closed at $26, which is exactly the offer price for its stock shares back in November 2013.

The stock is now fluctuating a bit in after-hours trading. But earlier today the stock was trading under $26.

This is just the latest rough patch that the San Francisco-based social networking company has encountered in the past few months. The stock has dipped on several occasions since chief executive Dick Costolo stepped down and cofounder Jack Dorsey (currently the chief executive of IPO-bound Square) took on the company’s lead role in the interim.

And yet, last month the company beat analysts’ expectations in its quarterly earnings release.

It’s not easy to be in the shadow of Facebook, which has almost 1.5 billion users around the world and continues to outperform Twitter in terms of revenue as well.