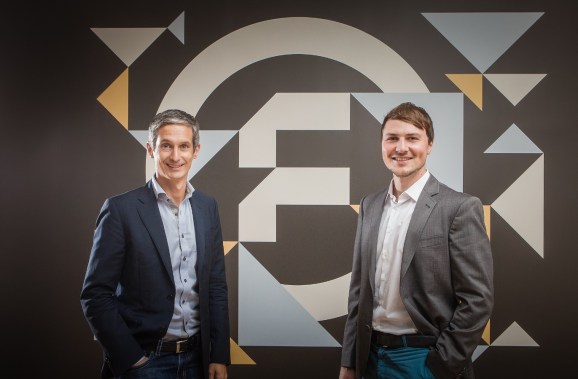 RNTS Media has raised 100 million euros, or $112 million, in a convertible bond to continue the company’s expansion into the global mobile advertising technology market.

Last October, Berlin-based Fyber allowed RNTS Media to acquire it for $190 million in a transaction that enabled it to go public on the Luxembourg Stock Exchange. Now, RNTS Media is also changing its listing so that it will appear on the Frankfurt Stock Exchange. Fyber continues to operate under its own name.

Why is it important to have an independent mobile ad tech company? RNTS CEO and Fyber cofounder Andreas Bodczek noted the recent concerns that game publishers had after Facebook proposed some changes to the way it shared data for its mobile ad platform. After the publishers objected, Facebook changed it mind. The independent companies such as Fyber give the game publishers an alternative when something like that happens.

He said in an interview with GamesBeat that the money will be useful as the mobile advertising industry consolidates. Fyber’s goal, he noted, is to remain an independent advertising technology company amid a number of competitors who are part of other platforms.

“We are an independent company, and the market is nearing a tipping point in consolidation,” Bodczek said. “To establish an independent platform next to all of the owned-and-operated competing platforms, you need to have access to a large amount of capital. It’s an appropriate action given our company’s ambitions. We are doubling-down on Fyber’s strategy of the last 18 months.”

Fyber is a mobile supply-side platform that simplifies advertising for mobile game and app developers. It provides a single dashboard that enables game and app companies to manage all of their ad networks with a single software development kit. With Fyber, developers can manage all of their ad networks at once. They can cut direct deals with ad networks and optimize their ad spending. The company expects the mobile monetization industry consolidate so developers can have a one-stop shop for monetizing ads. Most of Fyber’s customers are game makers.

RNTS Media, which operates Fyber as its core business, has already received about 100 million euros, or $112 million, from the convertible bond. It can still draw an additional 50 million euros, or $56 million, if it wishes, for a total of $169 million. A convertible bond is a loan that a company receives. The lenders have the option of converting the loan into a specified number of shares of common stock in the issuing company.

“We have a pretty good shot at being one of the leading companies in this space,” Bodczek said. “It’s been a transformational year for us.”

Bodczek said the convertible bond was the most capital-efficient way for the company to raise additional money, as it didn’t have to give up any additional equity in itself.

Bodczek started the company with Janis Zech in 2009. Most of the company’s business is in Europe and the U.S., but the company hopes to expand in the rest of the world. Fyber serves about 320 million users each month through its customers, who are mostly game makers.

The company’s ambition is to become full stack supply-side platform, or SSP, and grow larger in reach and scale, Bodczek said. The company is targeting companies both on the technology side that would help the company accelerate product development as well as mobile ad exchanges or networks with size and scalable products, and new non-rewarded ad formats, to continue to be a strong leader in mobile ad monetization.

Fyber started its life as SponsorPay in 2009, focused on creating advertising solutions for browser-based web games. In 2011, it shifted into mobile, and today, its business is almost exclusively focused on the $18 billion mobile ad revenue market. Today, Fyber’s thousands of customers include Gree, Glu Mobile, Kongregate, and Pixelberry. It offers those companies a single, unified, mobile supply-side platform that allows customers to integrate, manage, and optimize their mobile ad revenue.

SponsorPay rebranded itself in July as Fyber, creating a brand that it felt could better describe its mission of unifying the fragmented mobile ad ecosystem with a single ad-management platform.