We’ve heard this over and over again: Women are underrepresented in the workplace, especially in the fields of science, technology, engineering, and mathematics (STEM). The U.S. Census Bureau reported in 2013 that men are employed in a STEM occupation at twice the rate of women and that nearly 1 in 5 female science and engineering graduates are out of the labor force.

Recently, tech firms have tried to boost their diversity numbers, and organizations have formed to encourage women to not only join the workforce, but become engineers and executives. Square‘s Code Camp program aims to further this goal by working with women in high school and college.

The program launched nearly three years ago, and the company completed its latest session this past week, providing 20 college students with an accelerated course about what life is like as an engineer. VentureBeat had the opportunity to attend part of Square’s fifth College Code Camp and speak with Vanessa Slavich — the company’s head of diversity and inclusion — who started the program.

“The market needs more engineers (we will be 1 million shy in 2020),” said Alaina Percival, chief executive with the global nonprofit Women Who Code. “It’s important to develop programs inside companies that help junior engineers get the experience they need to be successful in the industry. One great solution is apprenticeship programs like the one Square is introducing; this can allow junior engineers from alternative avenues to get the experience and opportunities they need.”

Slavich shared that Square is constantly reevaluating the program, and that when her team thinks about future Code Camps, they look to current trends. This time around, Square sought to educate the students about imposter syndrome, a psychological block which prevents people internalizing their accomplishments.

Another update to Code Camp is its partnership with the nonprofit Hack the Hood. Slavich shared that companies often look for extracurricular activities from student applicants, but believes that women are often focused too exclusively on school. Code Camp’s goal is to help students become successful and accelerate their careers, and working on an app for a nonprofit will add that extra something to the student’s resume.

During Code Camp’s first year, it focused broadly on technologies, but now the program looks particularly at information security and machine learning. These topics are “two areas women aren’t necessarily focusing on,” Slavich explained. “It’s been popular and [the students] have been learning a lot. You don’t get this in class.”

Slavich shared that her team screens all the applications, but that actual interviews are conducted by alumni. Some Code Camp participants wind up coming back for full-fledged internships and Square has already hired three alumni full-time.

Although Code Camp has its altruistic side, it’s also a recruitment tool for Square. Slavich tells us she’s approached other companies about expanding the program, but no deals have been signed as of yet. Because of the work involved in setting it up, companies don’t know “who’s going to own it,” Slavich said.

Nevertheless, this year students got an opportunity to meet with women engineers from Twitter, Uber, and Yelp — something Square offers to all Code Camp participants, although featuring different companies each time. The point is to not only help students network with each other and Square employees, but to expand that group of contacts to others within the tech industry. 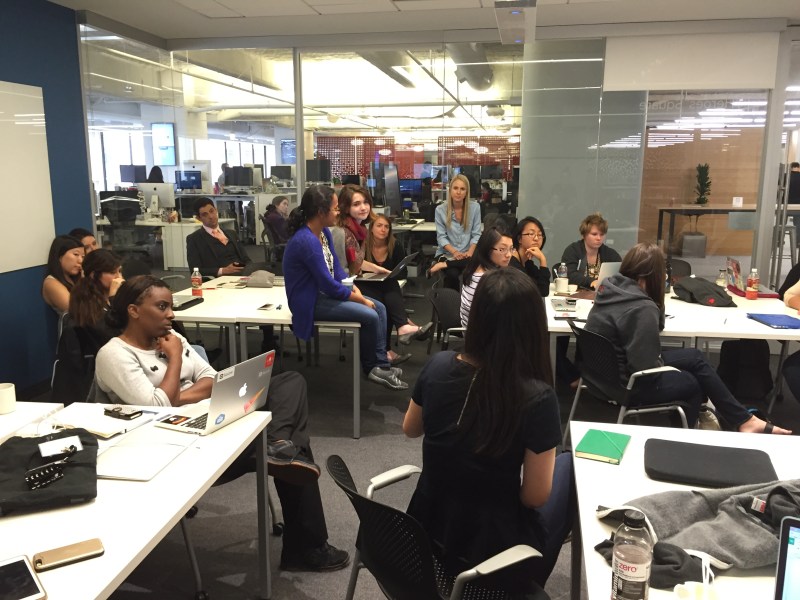 At the end of the week, students give a presentation about an app that they’ve built. This year they were separated into two teams, with one focusing on building applications for Hack the Hood, and another aimed at furthering philanthropy within Square.

Hack the Hood is an organization that trains low-income youth of color in technology and marketing skills. Square’s Code Camp participants built an application to provide communities with access to job openings in their neighborhood. Leveraging Twilio, the team made it so users will receive an SMS notification when there’s a new job posted, so they won’t be dependent on having Internet access.

The other team’s project is an internal application that allows Square employees to find volunteer opportunities and track the number of service hours spent. Employees currently utilize Wiki pages that list short-term and long-term volunteer opportunities. To boost engagement, the team created a website and mobile apps. 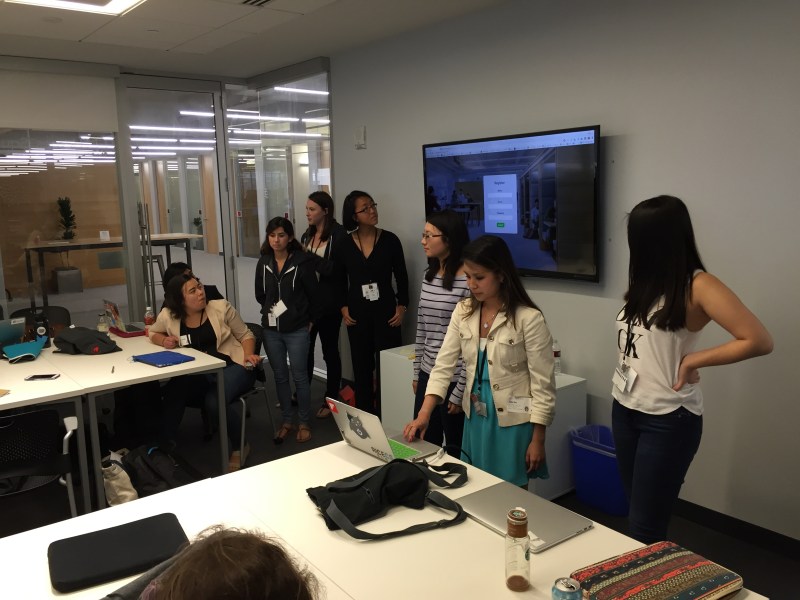 “I think what Square is doing is great for women in engineering because it hits at an often overlooked demographic of high school and college-aged young women,” said Kollective Mobile chief executive Sian Morson, who spends time volunteering with organizations to further diversity in tech.

…Girls are often deterred from STEM subjects, and thus careers, by high school. So, Square helps to turn that tide and encourage girls that this is something that IS indeed possible. It doesn’t hurt that Square is a well-established company that the girls can identify with and has technology that the girls have probably used.

Square’s Code Camp provides a learning environment for these students, many of whom have found new areas of interest and opportunities. And Square isn’t just providing lecture-style courses for these students. Besides helping them improve their skills, the company has them meet with high-profile individuals within the organization, including chief executive Jack Dorsey.

One student described how empowered they all felt after going through the camp:

It doesn’t matter where you go, if you don’t feel comfortable asking for help, it stunts your growth. It’s important to look at the environment. I’ll be putting more emphasis on whether people here will serve as good mentors, challenge me to grow, and if they’ll be there when I need something.

It’s striking to see such a beneficial program come from a company that’s yet to release its own transparency figures around hiring — unlike Apple, Twitter, and Facebook. Slavich said Square has yet to divulge its diversity statistics and declined to comment further.

In spite of that, Code Camp participants were focused on the benefits of participating in the program: “It makes it seem that you belong in this industry.”