Laserlife is a new music rhythm game that you’ll be able to play soon with gesture controls thanks to the Intel RealSense camera.

Game developer Choice Provisions, formerly known as Gaijin Games, created the title as a showcase of the Intel technology, which allows you to control a game by waving your arms in the air in front of a computer with a RealSense camera.

Alex Neuse, chief executive of Choice Provisions, showed me the game at the Intel Developer Forum last week. You can stand in front of your laptop and wave your arms, catching various molecules as they show up on the screen and move toward you. The Intel RealSense camera, which can detect motion at about 18 inches from the screen, captures the movements and figures out if your timing is working correctly in the game.

I played it briefly but not so elegantly. Neuse took over and played it even though his arms were getting quite tired. You use both arms at once, reaching out to grab dots as they appear on the screen. The game actually has a storyline.

“It’s an interactive biography of a dead astronaut found floating in deep space, and he is eventually found by future intelligences that have no concept of humankind,” Neuse said. “They extract memory particles from the astronaut’s body. In the rhythm game, you extract molecules and reconstruct a memory.”

San Francisco Choice Provisions was founded as Gaijin Games in 2008 by Neuse and Mike Roush. It launched titles such as Bit.Trip, and it changed its name last year. 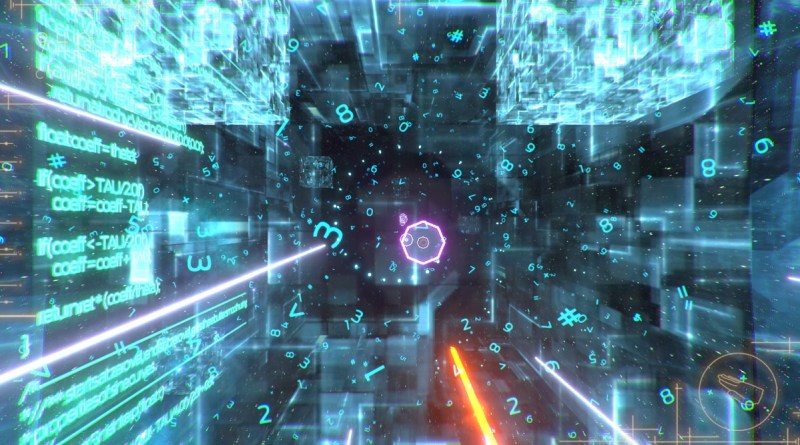 Above: Laserlife by Choice Provisions

Intel supported the development of the RealSense version of the game, Neuse said. The team has been working on it for about a year. Neuse believes it will have about four to six hours of gameplay.

“I think most Kinect games are bad,” Neuse said. “Gesture games are super new, and people are trying to do too much. We are trying to do a simple game with simple mechanics. We try to perfect it and do it over and over again in unique and interesting ways.

The game is coming out on Steam next month on the PC, and it will also be out on PlayStation 4 and Xbox One. The only version with gesture controls is the RealSense version on the PC. Otherwise, the game works with standard game controllers.

Here’s a video of the game in action, played by Neuse.