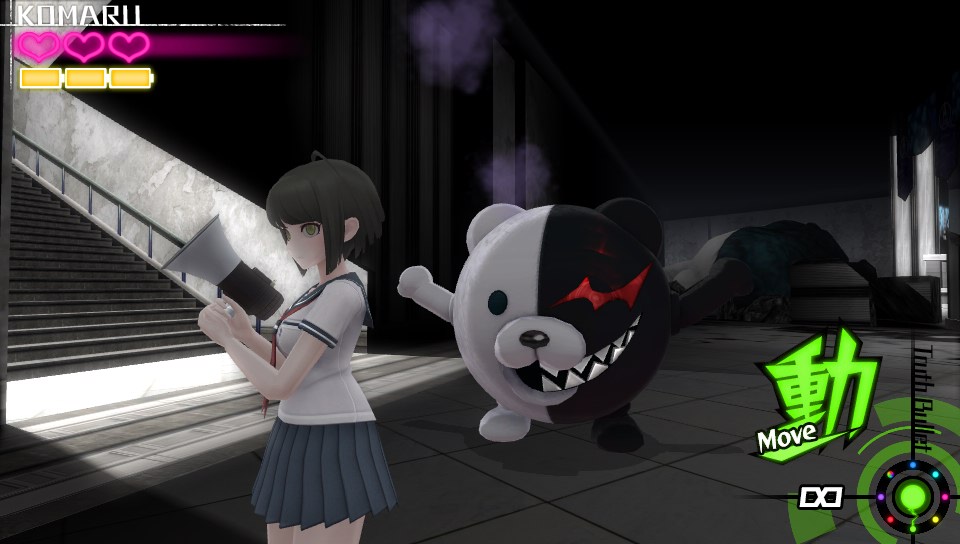 Perhaps you’ll choose to watch Fukawa skipping through a field of flowers, before she cuts a robot bear into ribbons. Or maybe you’ll opt for throwing scissors at a trapped bear like darts. In each case, it’s enough to make you smile, even after you’ve performed the move a few times. Above: A hint on what to do next.

Ultra Despair Girls won’t torque your brain, but it does offer great rewards for thinking ahead. In some areas, you can plan your movements through the next room in advance, then execute them when you move inside. You may need to plan a route that moves past bears without killing them to a specific objective. Or you could get into a situation where your limited bullet ammo means that you must entice all the bears into a specific spot to dispatch them together.

These light puzzle elements added to the action and, in some cases, the suspense of the game. 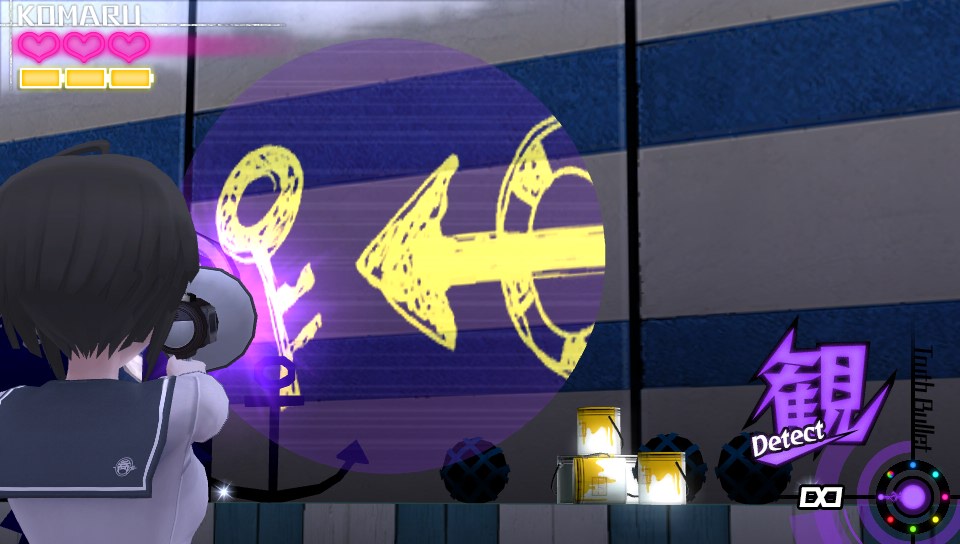 Above: Using the Detect setting on your hacking gun allows you to pick up extras from the environments.

Extras! Extras! Read all about it!

It’s definitely worth collecting the extras in Ultra Despair Girls, which you find by detecting small flashes of light or going to out-of-the-way places. You’ll get the terrible, terrible manga that lead character Komaru so desperately loves, cutscenes, “hit list” character cards with your allies on them, and even slides showing tidbits of separate storylines, such as the tragic tale of Socki the Sock.

None of it adds too much to the main story, but it’s all lovingly written, and I was sad to still miss a slide or two from Socki’s story at the end of the game. 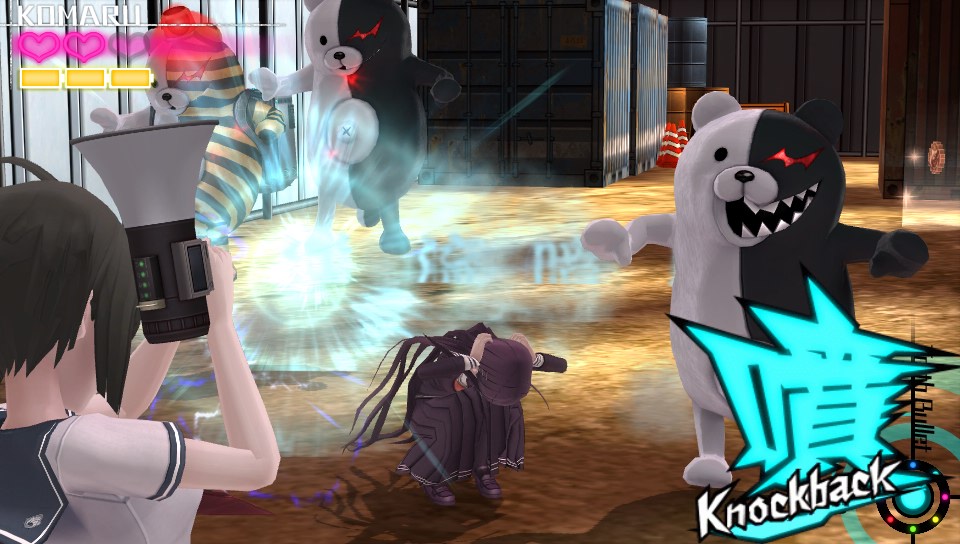 Above: Knocking back yet another onslaught of bears.

Previous Danganronpa games were visual novels for good reason: They had a lot of story to tell, and it was the most efficient way to get it all across. Ultra Despair Girls doesn’t pack in quite as much, but it interweaves the tale with uninspired action sequences.

As Komaru, you use a hacking gun to fire electronic code at the bears and other evil robots. The controls require some clunky movements — ideally, you’re using both sticks, a trigger, a button and possibly the D-pad to shift bullet types. (One ammo type attempts to render a bear useless, another might cause an electrical surge, and one might make it dance, for example.) 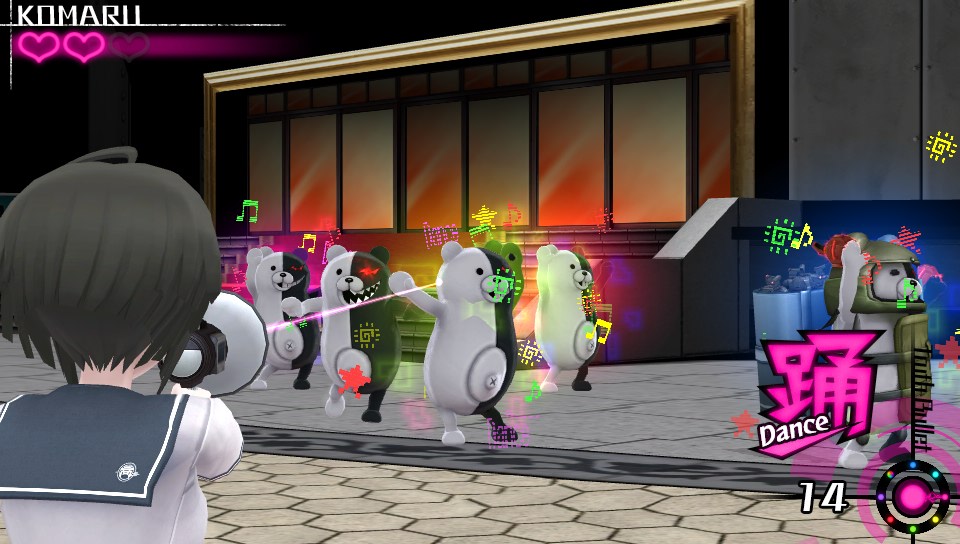 Fukawa’s action moves a little more smoothly, with left-trigger and button combos, and she responds well to mindless mashing if you’re so inclined.

The developers of Ultra Despair Girls didn’t make the action a total throwaway, but it sometimes gets dangerously close. 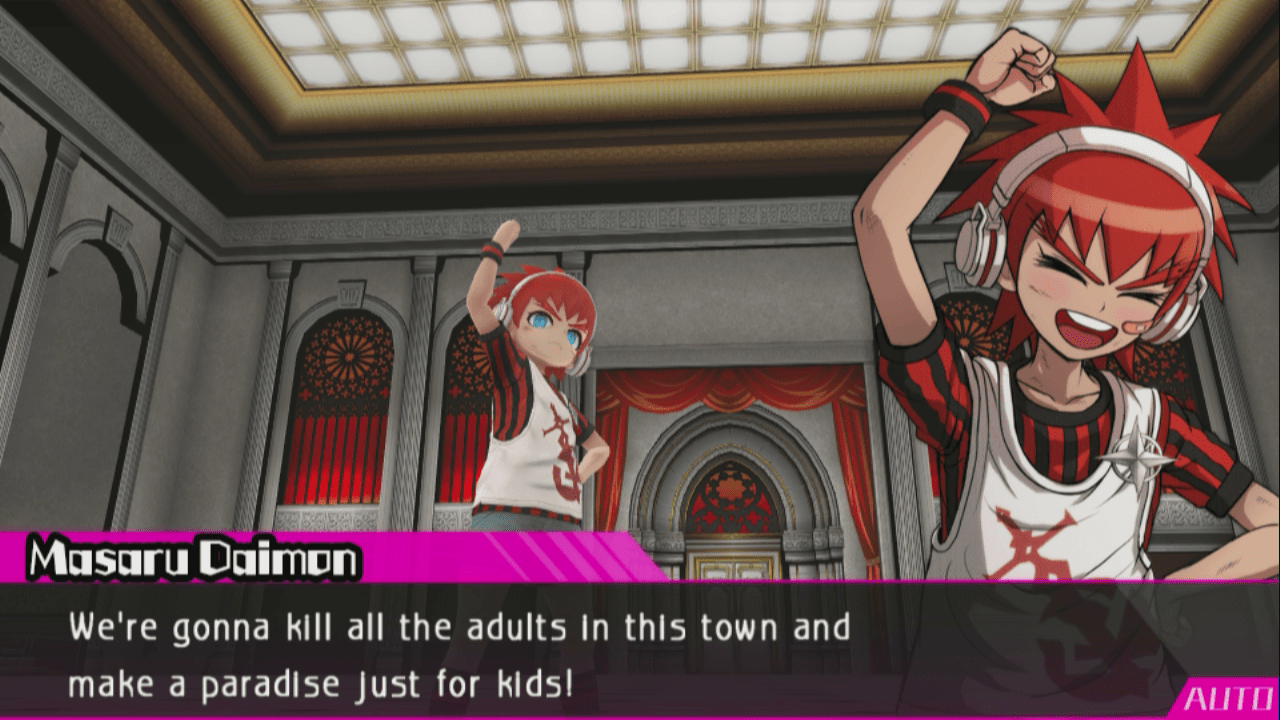 Above: A creepy moment — unless a glitch keeps bullet sound effects happening through the scene.

Every so often, one of the bullet special effects would refuse to stop. When that happened right before an emotional cutscene, it eliminated the immersion, as the sound effects would keep playing even as characters ran through their tear-jerking dialog.

The bugs didn’t crop up continually, but they popped up enough times to be irritating. 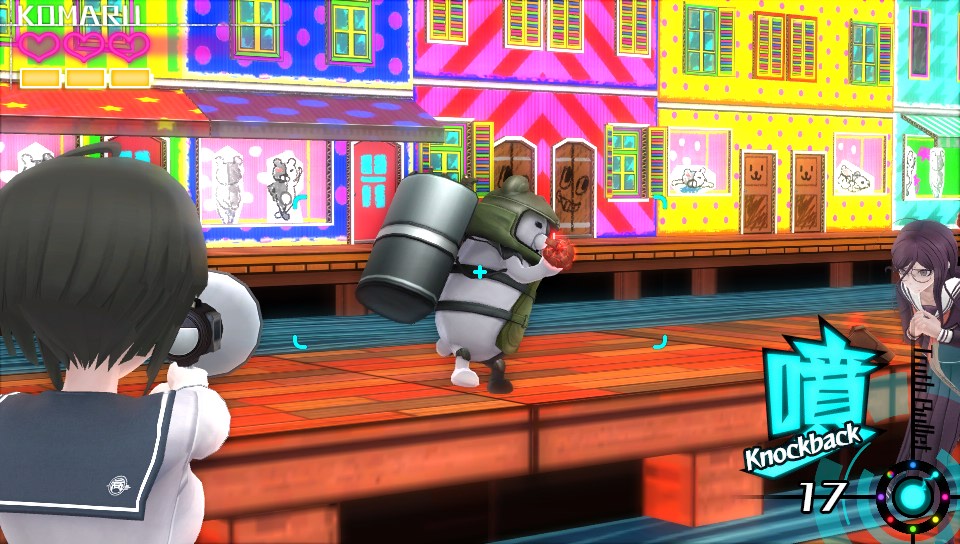 Above: A bomber bear. Not much of a plot advancer, but he’s darn cute.

People who have never played a Danganronpa title probably won’t want to begin here. Go back and play Trigger Happy Havoc, then happily immerse yourself in the continuing storyline of Ultra Despair Girls. At least familiarize yourself with that story before diving in.

If you’re already a Danganronpa fan, however, this makes a great new addition to your collection. You won’t be enthralled by the action, but the story, voice acting, music, light puzzle elements, and additional material will keep you entertained in the 20-plus hours you’ll likely spend playing. (The game finished up here after 22+ hours, which included a lot of running around and looking at extras.)

Die-hard Danganronpa lovers: add seven points to this score. For everyone else:

Danganronpa Another Episode: Ultra Despair Girls goes on sale for PS Vita Sept. 1 for $40. GamesBeat received a copy of the game from the publisher to review.