We have updated this review with a score and impressions of the game based on the current state of the multiplayer servers. As of this writing, the servers are stable and the reviewer was able to find matches and co-op games online quickly and easily.

The original Gears of War is among the most influential games of the last generation of consoles, second only to Call of Duty 4: Modern Warfare. Its behind-the-back perspective and cover-based combat have inspired countless knockoffs and inspired new directions for several other series.

But the degree to which Gears has acted as a base for other games only makes how well the original game, the Ultimate Edition of which hits stores tomorrow, holds up all the more impressive.

Gears’ gameplay is still as fresh as ever

By now, you’ve probably pressed a button to stick to cover, held the left trigger to peek over it, and the right trigger to shoot out of it thousands of times. But few of the games inspired by the original Gears of War utilize the formula as well as developer Epic Games did back in 2006. Gears of War highlights just how important feedback is in creating the sense of “feel” in games; the Lancer machine gun makes Locust bleed in exaggerated spurts, making it powerful; a point-blank Gnasher shotgun shell shatters enemies into spongy bits with the gross sound effects to match, making it clear how strong the weapon is up close.

Gears of War is almost 10 years old, and its gunfights are still as good as many games out this year. These shootouts are as tense and fun as ever (especially on higher difficulties), weapons like the Torque Bow and Hammer of Dawn as novel as they were on release. And with Gears of War 4 still a year and change away, giving the original game’s fine-tuned gunplay a chance to shine on new consoles is a great idea.

And so is the multiplayer

The press and media multiplayer sessions I played solidified a strong impression: multiplayer Gears’ mix of twitch reflex and methodical sneaking can still eat your nights away. These maps flow from claustrophobic to expansive seamlessly, with choke points and ways to circumvent them aplenty. And the adrenaline rush of being the last person on your team in a Warzone  (the survival, round-based game mode) match and mounting a combat can still give you shivers.

And though the original Gears of War doesn’t have the array of weapons fans have gotten used to, it’s far from boring. You have your traditional weapon types like machine guns and sniper rifles. But even someone without good aim can hold their own with weapons like the Gnasher, the Lancer’s chainsaw bayonet, and sticky grenades allowing players to use good awareness and positioning to outsmart those with faster trigger fingers.

These original maps are also among the best in the series, with the game types like Warzone, Blitz (a faster version of king of the hill) and Team Deathmatch are some of the most classic multiplayer modes you can have. It goes to show how timeless they can be when combined with some excellent funneling and intersecting hallways.

The new visuals are a noticeable upgrade

It might be a little strange to give a game that was touted as an HD showcase for the Xbox 360 a facelift, but Gears of War needed it. Every level, both in single and multiplayer, looks like you remembered it, though going back and looking at comparison shots shows you just how much has changed. The single-player cutscenes changed the most, and you’ll notice it, too — characters’ faces have been reanimated (Dom, the perennial co-op partner, has a different facial structure now) some are wearing different clothes, and several scenes have been re-shot.

There’s no changing back the original game’s graphics and that might upset some purists, but just about everything touched on visually has changed for the better. Multiplayer runs at a solid 60 frames per second, too, which is actually a little jarring at first as you hop between campaign (which still runs at an uneven 30) and multiplayer, but I eventually got used to it.

Ultimate Edition developer The Coalition knew just what to touch up and what to leave alone, and while it isn’t the impressive showcase for the Xbox hardware it used to be, the remake manages to look just as great as it did then, even if not everything’s in the right place. 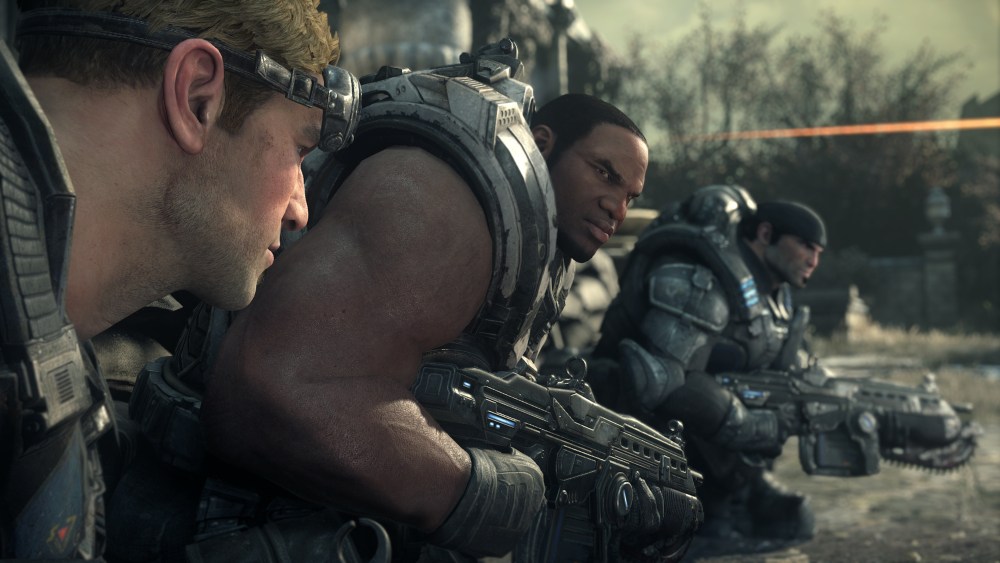 Above: The cutscenes play out mostly the same, but several are shot from new angles.

The story is dumber in retrospect

Though the ducking, shooting, and reloading in the original Gears still feel great, the story, the background lore, and the “destroyed beauty” theme the series trumpeted throughout its existence all feel wasted in a way, and it’s never more apparent than in the plot of the first game.

The first Gears of War is one of the most brazen examples of how the stories in games are often context for gameplay. Its story moves too fast, jumps from one locale to another in order to give you a new environment to shoot in, hints at too much and offers too little in order to truly captivate in any way. All of this was dismissable when the first game out, but in the wake of its sequels, which attempted to give the Cog/Locust conflict a little more gravity (with mixed results), it’s all the more reason to shake your head at some of the tropey, simplistic adventure game comedy-of-errors situations that force you to shoot more Locust. It’s not something you can easily touch up, but it’s disappointing nonetheless.

The A.I. is still messy

I’m not sure if this was always the case with the first game or if the remake introduced some of this, but playing through the game on normal difficulty (and then part of the game on hardcore), I noticed the A.I. is spotty in several areas; I’ve managed to flank groups of enemies and shoot them all before they even noticed me. In some sections, it takes far longer for Dom’s A.I. to find the spot he needs to be in order for me to proceed. It’s worse in co-op, as enemies don’t seem to know what to do when faced with two targets coming from multiple sides. It’s not a deal-breaker and it leads to some amusing moments, but I don’t remember this happening as much in the original, and it takes some of the tension of out gunfights.

The lack of a Horde mode might be the only thing preventing this remake from being the default multiplayer option for people who’ve stuck with the series. It’s understandable that it wouldn’t be in (just every other facet of Gears multiplayer is intact), but that doesn’t make me miss it any less.

The original Gears of War holds up better than you might think for a game that inspired years of me-too shooters. It may not be worth $40 for everyone now, but if you haven’t touched the series before and want a good starting point before Gears of War 4 hits next year, this is the best place to start. If you’ve already played the game, you may already know whether you want to go back, but the Ultimate Edition does right by one of the defining games of the last generation.

Gears of War: Ultimate Edition is available now for Xbox One. Developer The Coalition provided GamesBeat with a free download code for this review.