In its bid to keep its taxi-hailing app offering as sticky as possible, India’s Ola announced on Monday that it is partnering with some of the country’s ecommerce giants to incentivise users away from encroaching rivals like Uber.

The Bangalore-headquartered startup, founded in 2010, recently raised an additional $400 million in April to expand its service into 100 new Indian cities by year end, taking the total to 200.

While cash payments are still rampant in emerging markets like India, Ola and other ecommerce players want to lock users into its platforms by linking credit card details to those accounts wherever possible. The latest numbers suggest that Ola has now well over 20 million Ola Money users, each with an average of about $15 in their accounts. (Ola Money is its ewallet that can be easily topped up through traditional credit cards.)

“The money you have on the OlaCabs app is fetched by the merchant app when you’re checking out,” Ola wrote in an official blog post. “Hit ‘pay’ to confirm, and you’re done! If one-touch payments weren’t enough, you also get exclusive discounts and privileges at our partner merchants when you choose to pay with Ola Money, e.g. 40 percent cashback on bookings at Oyo Rooms.”

The partnership in Lenskart’s case seems especially timely. The company just today announced plans to invest around $9.4 million to set up a manufacturing facility over the next three to six months to ramp up operations. New Delhi-based Oyo Rooms, meanwhile, was listed on Sunday as one of 50 companies that may be the next startup unicorns by The New York Times. 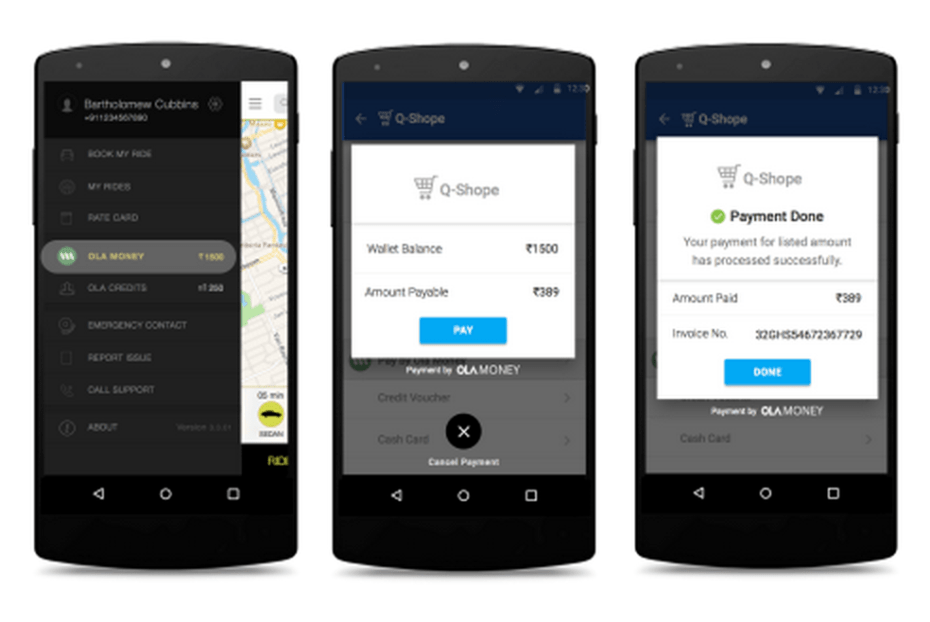 It will be interesting to see if Ola can eventually score partnerships with India’s real heavyweight ecommerce titans, Flipkart and Snapdeal, which could now be collectively worth close to $20 billion based on the latest reports and industry murmurs — or even Amazon, which is investing $2 billion in its India operations. Either way, more cross-platform integration will be coming. And if Ola does ever break out conversions/revenues from these partnerships, those numbers will be telling.

“At Ola, we’ve always worked on making your lives simpler,” the company continued in its blog post. “We’d like to think that we’ve made a big difference in the way transportation, food and how your daily grocery comes to you and now we’re all set to make it just that simple for you to pay. As we get closer to our mission of mobility for a billion Indians, we want to make sure that we solve for the whole experience, in a way that will give you more choice and freedom.”

Meanwhile Uber is not exactly standing still in India. It recently began accepting credit card payments again in the country of 1.3 billion after legislators forced it to switch to an in-app e-wallet payment system last November. It also began testing cash payments in India in May, and took fresh funding from India’s Tata Capital last week estimated to be worth between $75 million and $100 million, according to Reuters.

More broadly, Ola claims it will clock one million rides per day by the end of August, while Uber is still reportedly somewhere around 200,000. But Uber plans to correct that — it says it will invest $1 billion in its India business over the next nine months. That is the same amount it is putting into China, though things haven’t been going entirely smoothly on that front.

We have reached out to both Ola and Uber for additional comments and will update you if we hear back. For now, check out the launch video below.