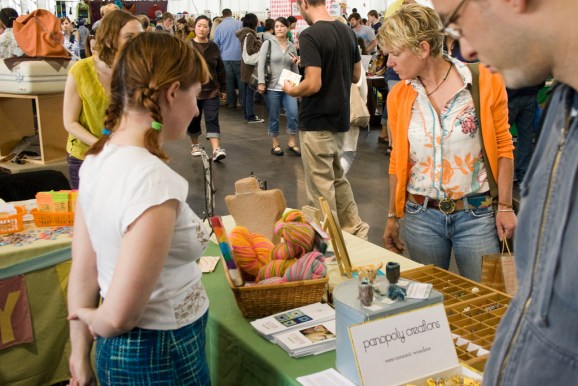 September is coming and that means the kick off for the fall session of Renegade Craft Fair, a massive gathering of independent sellers that comes to a slew of U.S. cities in the lead up to the holiday season.

In preparation for the festivities ahead, Etsy is bringing its localized list of suggested shops and events to mobile. Etsy began testing its location feature on the Web late last year. Users type in their location and Etsy Local serves up a list of nearby stores and events featuring Etsy sellers. It also includes more specific information like which Etsy sellers will be attending an event or have merchandise at a given store. Etsy Local also provides general information about a store or event like its address, hours, phone number, and website. 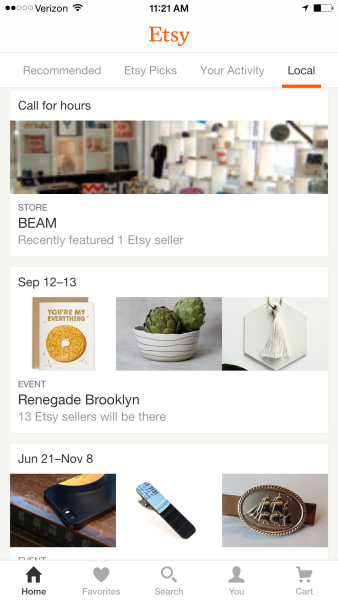 Though Etsy Local initially launched on the Web, the feature makes much more sense on mobile, where shoppers can access it while they’re out running errands or looking for something to do. If you’re into shopping local or have ever wanted to handle some of Etsy’s handmade goods before throwing down your hard earned cash, this is a pretty fun feature.

It will also help sellers further bridge the gap between online and offline sales, a keen area of interest for Etsy. Though both mobile and web commerce is growing, it still comprises less than ten percent of overall retail commerce. To help grow sales, many online marketplaces are finding ways to have a presence offline. For instance digital retailers Warby Parker and Bonobos have both expanded with their own physical stores.

Etsy is slowly working its way into brick and mortar stores through a variety of measures including a program that connects boutique retailers with Etsy sellers and its own mobile credit card reader. The marketplace of course collects a transaction fee on purchases made on its credit card reader, but it also takes a 3.5% fee on deals made through Etsy Wholesale, its retailer marketplace for select seller goods. Giving consumers mobile access to its cache of localized merchant data brings its offline efforts full circle by engaging consumers where they’re most likely to be — on their phones.