When Game of War mobile game publisher Machine Zone sued Kabam a couple of weeks ago for allegedly accessing a confidential Machine Zone document, the evidence was based on an argument that took place at a cocktail party. But now, during the course of discovery in the lawsuit, Kabam has disclosed an email that Machine Zone says supports its case. On top of that, the declaration of a Kabam employee appears to shed some light on some financial details that Machine Zone wants to keep private. 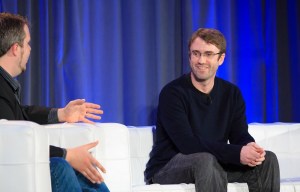 The newly disclosed email from Kabam corporate development director Daniel Wiggins is the latest in what Kabam belittles as an episode of HBO’s farce, the Silicon Valley TV show. But if this email is an indicator of what is to come in the case, the whole thing could turn out to provide a rare look inside the corporate walls at two of Silicon Valley’s largest mobile game companies.

The incident started on August 12 during the Casual Connect game conference at an after-party that took place at the Clift Hotel in San Francisco. Gabe Leydon, the chief executive of Palo Alto, Calif.-based Machine Zone and whose Game of War: Fire Age has been in the top charts for a couple of years, was at the party with Wiggins. Based on sources interviewed by GamesBeat, we believe Leydon is trying to raise a $500 million round of funding — a huge amount for a mobile game company. His pitch deck (a PowerPoint document) was apparently being circulated by investment bank Morgan Stanley, as we reported on June 25, well before the incident happened.

Wiggins and Leydon got in an argument while drinking at the cocktail party. During that bickering, Wiggins allegedly told Leydon that he had seen the confidential Machine Zone pitch deck. After that, Leydon became irate, and Machine Zone sued Kabam the next day. The companies began gathering testimony and witnesses. At first, Kabam said the lawsuit was ridiculous, like an episode of Silicon Valley, and that it could find nothing related to Machine Zone’s deck in all of Wiggins’ computer documents. Kabam still maintains it does not have the confidential document.

But the case has brought up one interesting email. Provided by Kabam, the email from Wiggins shows that he sent a message to his supervisor, Chris Petrovic, the senior vice president at Kabam, about Machine Zone’s attempts to raise money. In an email sent on July 10 with the subject line (sic) “Re: MachineZone and Japan,” Wiggins told his boss that he talked to a banker at Morgan Stanley who was complaining about “how slow Japanese companies were to make decisions and negotiate.”

Petrovic asked who the “big players,” or presumably potential investors, were. Wiggins replied, “No confirmations. I got him to admit that they were advising, which was prior a two-source rumor. I tested (sic) w “so SoftBank and Gung Ho” [a reference to SoftBank and its subsidiary GungHo Online Entertainment],” and he laughed, awkwardly excused himself from our group.”

That email message differs slightly from an account that Wiggins gave earlier, where he said that he met a Morgan Stanley person at a different party and couldn’t confirm that they were representing Machine Zone in its attempt to raise money. In his previous declaration, he had said that he surmised that Morgan Stanley’s big client was Machine Zone.

Kabam spokesman Steve Swasey, senior vice president of corporate communications, said in an interview with GamesBeat that the email means nothing and doesn’t corroborate any of Machine Zone’s allegations.

“They are chasing an elusive butterfly which has transparent wings, because it doesn’t exist,” Swasey said. “We have been transparent on this because we know there is nothing here. Regretably, it has gone on for far too long. We want it to go away, but we will defend ourselves.” 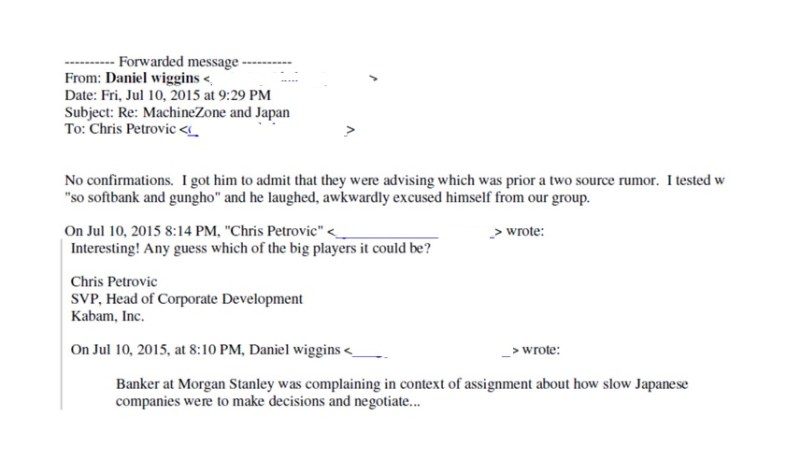 Above: Kabam email, with email addresses redacted, between Daniel Wiggins and Chris Petrovic.

But Machine Zone views the email as a kind of smoking gun. Tracy Tosh Lane, the deputy general counsel and head of litigation for Machine Zone, issued a statement about the discovery of the email.

“Kabam’s story simply doesn’t add up. One month before Casual Connect, Daniel Wiggins sends an email bragging to his boss, SVP Chris Petrovic, that he successfully pumped a Morgan Stanley banker for highly confidential Machine Zone information,” Tosh Lane said. “Rather than reprimanding Mr. Wiggins, Mr. Petrovic applauds Mr. Wiggins’ behavior and even asks for more information. Mr. Wiggins’s statements at Casual Connect are looking like more of a drunken confession than innocent banter. We believe this email is just the tip of the iceberg and reveals the true business practices of Kabam and its executives.”

Wiggins sent a second email about Morgan Stanley shopping around a Machine Zone deal, but that was simply a copy of my publicly available article on rumors about the deal.

Wiggins’ own previously undisclosed declaration of what happened was recently unsealed in the court, and it is also revealing. Wiggins’ job is “competitive intelligence,” or finding out what other companies are doing.

Wiggins claims in his declaration that he and Leydon gradually became involved in a “very heated exchange” about the business prospects for both companies. Leydon put down Kabam for being dependent on licenses from Hollywood entertainment companies. Kabam has licenses from Disney’s Marvel and Warner Bros.’ The Lord of the Rings properties. Wiggins alleges that Leydon said that the licensors are “evil” and “predatory” and that “game developers [such as those who license their works to Kabam] are stupid to work with licensors because they take advantage of the game developers.” 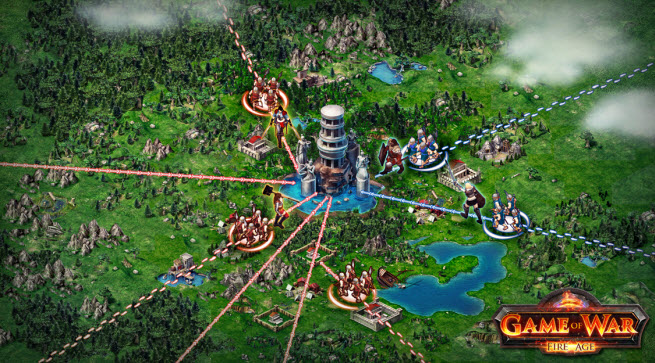 Wiggins declared, “I felt Mr. Leydon was extremely aggressive — if not downright hostile — in attacking Kabam so openly and in public.”

Wiggins further said that Leydon “bragged” that his company had only paid about $1 million to use supermodel Kate Upton’s likeness in the Game of War ads. As a result, Wiggins said that Leydon contended that the Upton rights were “hugely profitable for Machine Zone.” Leydon also allegedly said that Upton did not require Machine Zone to pay ongoing royalties for the use of her likeness.

Leydon also reportedly said that his company has 1.2 to 1 ratio of lifetime value (LTV) to cost per install (CPI). That means that the amount of money that Machine Zone gets from its free-to-play games is 1.2 times the marketing spend. Wiggins did a calculation in his head (first doing so inaccurately) and concluded that marketing spend is about 83 percent of Machine Zone’s costs. Wiggins doubted that model would be sustainable.

Upon hearing that, Leydon allegedly said that Machine Zone’s revenues next year would be $1 billion. In other words, Leydon allegedly communicated a confidential figure that is likely part of the confidential document in question. Wiggins said the rumor was that Machine Zone was not profitable, and he alleges that Leydon replied that the company could become profitable very quickly if it just stopped “spending so much on marketing.”

Wiggins alleges that Leydon “shouted at me for some time.” Witnesses reported that the two men did in fact get into a heated argument over the matter. Leydon reportedly showed his phone to Wiggins to convey that he was texting his lawyer to file a lawsuit against Wiggins and Kabam.

I would expect Machine Zone’s legal counsel to point out that the witness declarations do not (so far) verify that Leydon himself disclosed any of the financial information during the argument. I would also expect them to say that Wiggins isn’t a reliable source of what Leydon said, as he admitted that he was both drinking and lied about one thing.

Near the end of his declaration, Wiggins said that Machine Zone’s complaint has many inaccuracies. He concluded, “In hindsight, I should not have made the false boast that I did about seeing a Morgan Stanley ‘deck.’ The fact is that I had had a few drinks, was just angry that Mr. Leydon was being so unreasonably aggressive about Machine Zone, and felt that someone should put him in his place about how wrong he was to attack Kabam and about his company’s long-term prospects for profitability.”