If you’ve ever gotten tired of picking up your Android phone while you’re sitting in front of your computer, well, you’re not the only one. A new Chrome app allows you to use your Android phone right from any computer that can run Chrome. It works on Windows, Mac OS X, and Chromebooks.

The new Vysor app comes from ClockworkMod, a company that has previously built several Android apps. It’s available in beta in the Chrome Web Store. In order to run the app, you’ll need to have Chrome 42 or a more recent version running on your computer. Then, once you’ve installed the app and chosen the right Android device that’s connected to your computer via USB, you’ll have to permit USB debugging using the pop-up dialog box that pops up on the Android device.

I was able to get my 2014 Motorola Moto X phone running remotely on my Chromebook and then on my Macbook Air. 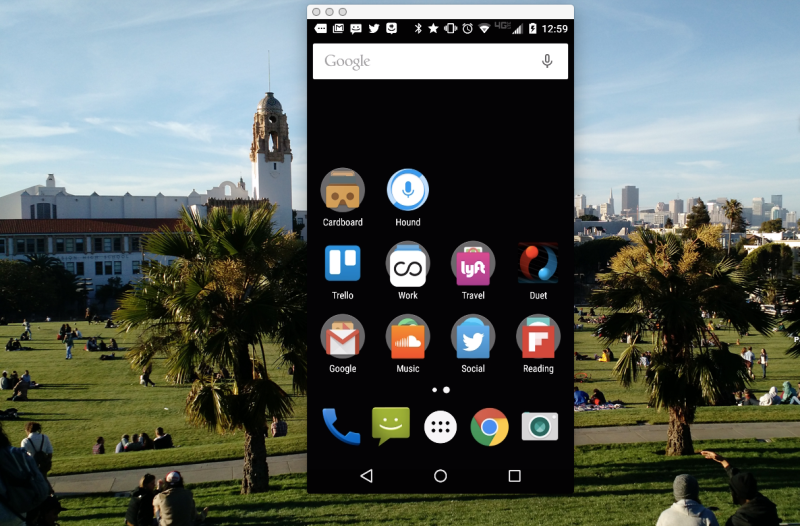 Above: Running my Moto X on my MacBook Air, thanks to Vysor.

The launch of the app follows the rise of apps like Pushbullet, which last month started letting users send SMS messages on desktop. That’s useful in some instances. But with Vysor, you can do so much more — you can use any of your phone’s apps from the desktop and see it mirrored on the phone.

The app could be helpful for Android app developers. In fact, that’s what Koushik “Koush” Dutta, the founder of ClockworkMod, had been thinking when he developed Vysor, as he wrote in a Google+ post on the app today. But non-developers can use it for a wide variety of purposes, too.

Here’s a video of the app in action, courtesy of Dutta: