Startup Velostrata is today announcing a $14 million funding round. And after operating in stealth mode for more than a year, the startup is now ready to show off what it’s built: a tool companies can use to keep data stored in their on-premises data centers, while doing the processing work externally in public clouds.

Rather than provide this functionality in a piece of dedicated software, Velostrata is offering a plugin to the VMware vCenter software that companies use to manage their virtualized infrastructure. From there, an admin can right-click on a virtual machine for a part of an application and run that virtual machine in a cloud. For now, that cloud is Amazon Web Services, but Velostrata will be adding support for additional clouds in the future.

One company using Velostrata, Guardian Industries Corp., was “able to get performance that was on par with on-premises,” Velostrata cofounder and chief executive Issy Ben-Shaul told VentureBeat in an interview. “In some cases they may have even exceeded it.” Applications can be performed more quickly, he said, because companies can easily get access to more compute power in the cloud.

That sounds promising, and a little surprising if you assume that the compute needs to be near the data to provide the best performance. But Ben-Shaul, who previously sold his company Wanova to VMware and earlier sold Actona to Cisco, has convinced investors to buy in.

Velostrata’s approach is not typical, but it is a new way to do something many companies are trying to do — offload some IT work from the traditional on-premises infrastructure elsewhere to a cloud. Hybrid cloud is thought to be a more likely long-term configuration than complete all-in cloud for many companies, and there are plenty of startups and major vendors offering products for hybrid cloud deployments. The question is how widely Velostrata’s architecture will be accepted. 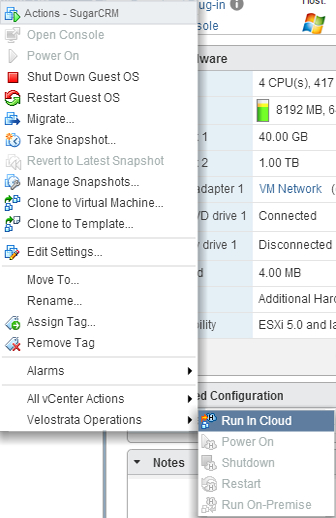 Above: A screenshot of Velostrata in vCenter.

The startup’s system only “streams” the small amount of data needed by an application at any given moment — and then caches it on the cloud. “No data needs to be transferred over and over,” Ben-Shaul said. The system also fetches the boot images it needs in order to run applications remotely.

Ben-Shaul acknowledged that some applications — relational databases, customer-relationship management software — work better than others with Velostrata.

A dozen companies have been working with Velostrata in a free beta program, Ben-Shaul said.

Velostrata started last year and has offices in San Jose, California and Tel Aviv. Around 25 people work for the startup, and the headcount should reach 40 in a year, Ben-Shaul said.