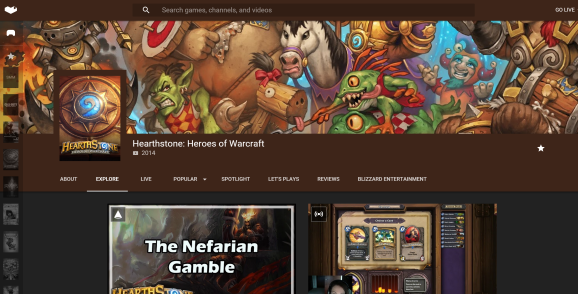 Last year, Google was considering purchasing the livestreaming site Twitch. That fell through, but this didn’t stop the company from pushing forward with a gaming initiative all its own: YouTube Gaming. This launched today, and GamesBeat is taking a closer look at all of its slick new features (game hubs) along with its remaining warts (the copyright-protecting algorithm ContentID).

If I were to get reductive about YouTube Gaming, I would call it nothing but a new skin for existing YouTube content. But that’s a bit unfair. This new feature has a totally reworked user interface that enables gamers to keep up with videos — both live and recorded — featuring their favorite games.

That is perhaps the biggest change with YouTube: It turns a site that previously had lots of gaming videos into something that is much closer to a real gaming website. You can see that shift when you first load up gaming.youtube.com or the apps.

On the right side of the YouTube Gaming homepage, you can see a bunch of people who are livestreaming games. Some of the most popular people already have well more than 10,000 viewers.

But the left sidebar is more interesting, as it enables you to star and follow certain games that you like. I chose Super Mario Maker, Hearthstone: Heroes of Warcraft, and Counter-Strike. Clicking on one of those games from my sidebar takes me to its hub page. Again, Google uses its algorithm to fill in the data. This includes a game description ripped from Wikipedia as well as a number of recorded and live videos. Most interestingly, each game hub also has a tab where you can find “let’s plays” or reviews. The let’s plays — where gamers record themselves playing a game from beginning to end — automatically fills with playlists. The review page naturally pulls in video reviews for said game.

For people who prefer watching videos over reading text, I could see YouTube Gaming easily taking over as the go-to site for content. Some games, like Super Mario Maker, aren’t even out yet, but you can head to its page and get a ton of videos from a variety of different people in an instant.

Some people might miss the editorial control you get from a website run by humans and not algorithms, but I’m thinking most won’t even notice the difference.

How it compares to Twitch

Of course, YouTube Gaming doesn’t exist in a vacuum, and it is very difficult to see it as anything but a reaction to Twitch. So let’s go ahead and make the inevitable comparisons.

How it’s better than Twitch

How Twitch is still better

YouTube Gaming does not spell the immediate doom of Twitch. While I like some aspects of what Google is doing better, it’s not perfect. And Twitch didn’t get to the top of broadcasting by accident. It has a smart team that knows what gamers want, and now it also has some real competition that should make everything about this space better.