For all those students who have had trouble wrapping their heads around a subject — and who hasn’t? — a New York City-based company called Knewton has a free solution.

It will wrap the subject around your head.

The seven-year-old company is today opening up for free its adaptive learning platform. Previously, it was available only via licensing deals that utilized textbook content from over two dozen publishers. Now, any teacher, student, parent, or other learner can learn — at no cost — K-12 math, English, science, and history, with other subjects coming.

If you take a lesson in basic algebra, for instance, the platform — currently in public beta — serves up small pieces of content and accompanying questions, with answers either multiple choice or free text. A new user is initially served base-level content.

As each question is answered correctly or not, the platform immediately scans its repository of content to serve up the next best explainer and assessment, based on “what you know and how you learn best,” as the company says.

It will keep doing so, until it finds a way to teach you the material. You “don’t finish something until you master it,” COO David Liu told me.

Teachers and others can upload unrestricted content in small chunks, which is then “calibrated” — tagged and organized — by the platform and by humans.

This curation, the company says, turns the content into “the best data-rich version of itself.” It can unleash for any student the most accessible explanation of the Pythagorean theorem, Liu said, which might have been languishing on a teacher’s computer and available only to her students. 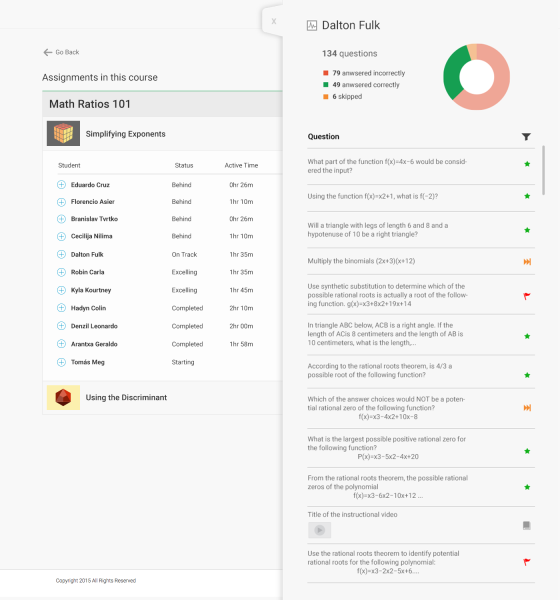 Above: A student history screen from Knewton.

The company says its public content library currently has over 100,000 pieces of curated content, such as teacher-made videos, university courses, and study guides. Some of it was uploaded by 25,000+ users during the just-completed private beta period.

By opening up the platform, Knewton can increase its content library and boost its database of user learning profiles. But the company has its sights set on a broader goal.

“It’s always been part of our strategy to be a platform that powers the world’s content,” Liu said. “We’re trying to democratize learning.”

Through its work with publishers — including Pearson, Elsevier, Sesame Workshop, and Houghton Mifflin — Knewton says it has helped over ten million students on six continents. The company says only students or their parents control the personalized data, and that it doesn’t sell or share the data.

The company, which has raised $105 million so far, envisions premium versions of the public platform, such as private label implementations for businesses. The platform is only offered in English for now, and there’s no pre-screening of users to see if they are fluent in the language. Support for other languages is on the drawing board.

Describing Knewton as “the best, smartest tutor in the world,” Liu said the most direct competitors are great local tutors.

While many learning platforms boast that they adjust next questions based on previous answers, he said Knewton’s data-driven process is fundamentally different because it offers a hyper-personalized path created on the fly from the best content components on that subject, geared to that user.

By contrast, he said, the other platforms are “choose-your-adventure” decision-tree systems whose paths are pre-defined by a subject matter expert for large groups of users, based on the number of correct answers.