When I sat down to play N++, I really didn’t expect my kids to become its biggest fans.

On the surface, I thought that the devilishly tricky platform game — available now to download on PlayStation 4 — was something I’d just end up playing by myself while I screamed at the TV in growing frustration. But it turns out that the sequel to 2008’s N+ (and the 2004 flash original, N) is actually a fantastic co-op experience. In fact, it’s proven more popular in my house this week than any of Nintendo’s Mario platformers has done previously.

Metanet Software’s N++ provides a seemingly endless procession of single-screen levels (it had 2,360 at launch) which start off easy but rapidly start testing your reflexes, speed-of-thought, and persistence. At times, it seems that N++ actively wants you to fail, but often, your failures prove to be lessons in how to manipulate the game’s beautiful physics engine to your advantage — completing tasks that at first seemed impossible.

Despite what seems a relatively steep price for a downloadable indie game — it comes in at $20 — N++ offers countless hours of gameplay for anyone looking for a serious challenge. And with a built-in level creator and a big future update planned, N++ will keep giving for months, and possibly years.

The fact that my kids (ages 12 and 10) keep begging me to play more speaks volumes for the addicting nature of N++’s explosive ninja antics.

The possibility of perfection

Whether you’re playing in co-op or solo, N++ offers a gloriously evil world that you can beat if you’re persistent enough — and don’t give in to your frustrations. Playing it with my kids sparked a conversation on the nature of perfection.

We concluded that sometimes — very rarely — it is actually possible for a single thing to be perfect. N++ teases you with that possibility of perfection with each new run through one of its many levels. It demands that you invest time in learning movement patterns, mastering your wall jumps, and skillfully avoiding its multifarious traps, and the emotional pay-off when you finally make that one perfect run — or sometimes just stumble to the exit door intact — is huge. 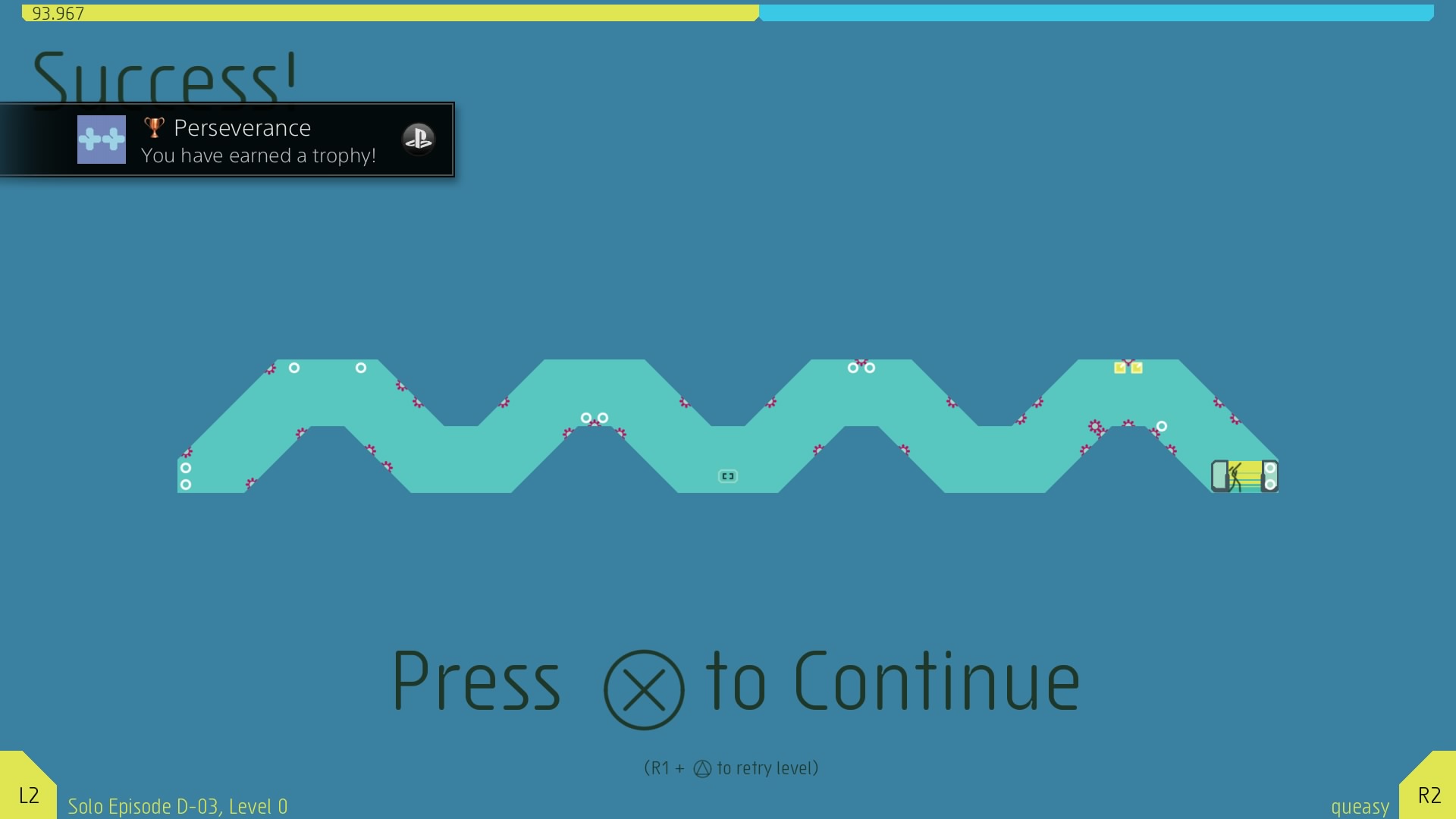 Above: Perseverance pays off in N++.

The co-op is sublime

N++ is one the finest co-op games in recent memory, and it’s certainly my multiplayer highlight of the year. Metanet has lovingly tweaked each level to ensure that everyone involved remains involved, even if they’re just the sacrificial lamb that has to hurl themselves into a mine for the good of the group.

We’re still working our way through the generous selection of co-op levels, and we’ve had an absolute blast up to now. We’ve laughed, we’ve cried (well, nearly), we’ve screamed at each other, and we’ve reluctantly swapped controllers to try and find the one person that can complete a specific role. And even when we’ve failed miserably, everyone’s wanted to try again, instantly jumping back into action with the press of a single button. Because next time, we’re going to beat it … right?

Unfortunately, co-op is only available locally, so you’ll to need to grab hold of one, two, or three willing friends or family members to enjoy N++’s multiplayer delights. 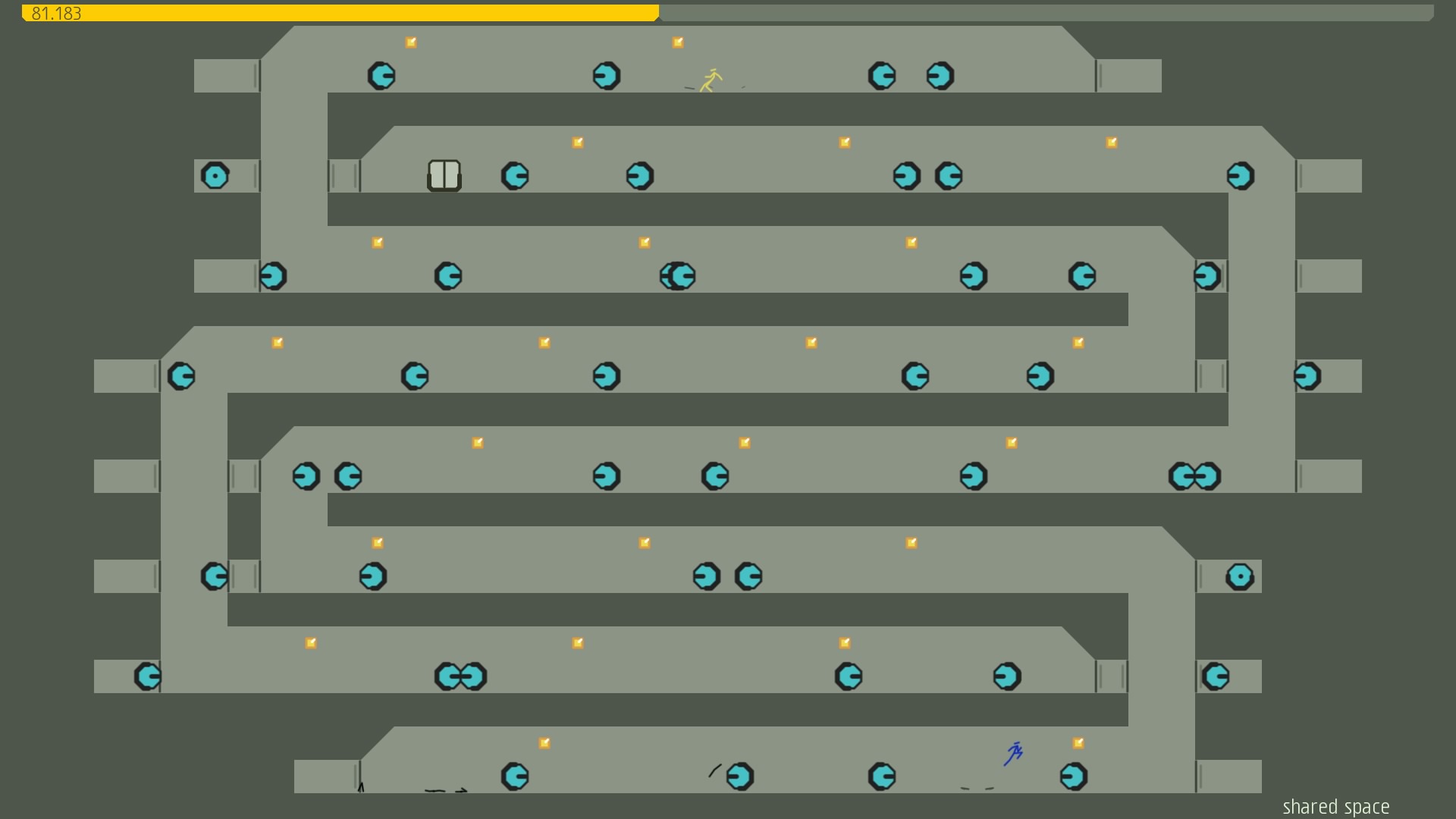 Above: A hellish vision of evil Pac-like hordes for co-op players.

You’re going to hit a wall at some point. That moment came for me last night when I just couldn’t face playing one of the co-op levels for the 74th time. I just had to walk away … but I’ll be back to try again when I’m feeling calmer.

N++ has no options to skip a level when it’s proving too tough, and that could lock you out of certain content. Levels are presented in sets of five, and if one of those five levels is too difficult, you can’t complete the set. In turn, that means you won’t be able to move on to certain other sets in the grid-like selection screen.

I’m not saying that N++ should necessarily have an option to skip levels — and it certainly doesn’t need a Mario-like hand-holding system — but everyone is going to find at least one level that is their personal nemesis. It’s then down to strength of mind as to whether you’ll blast through it or not. 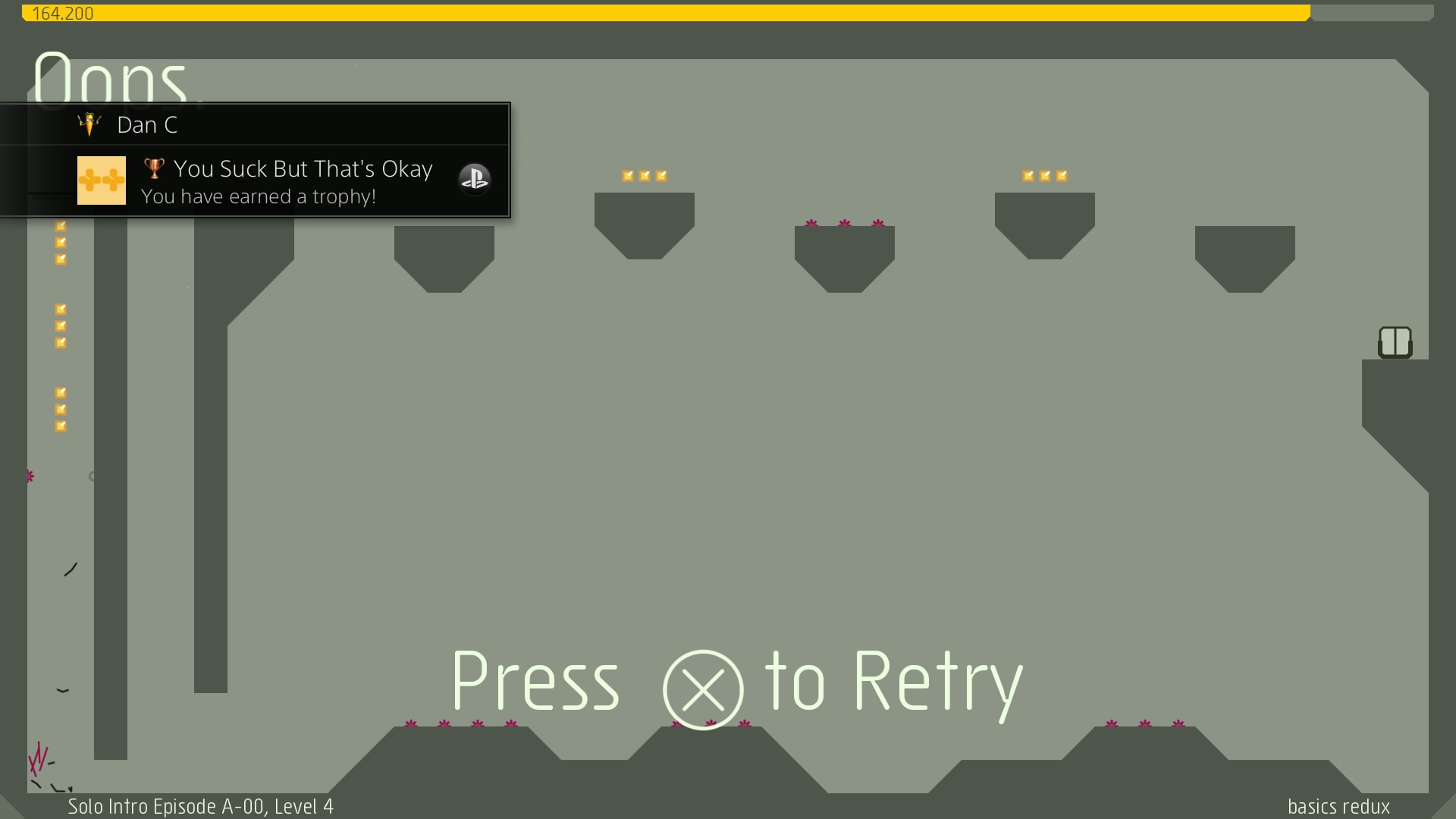 Above: N++ let’s you know pretty early on that you suck.

N++ is the new co-op game of choice in our house. And, if you like crazy, physics-based platform action and a decent challenge, it’ll likely find similar favor in yours. Even just played solo, N++ offers so much content and replayability — and is so obviously a labor of love — that it’ll stay on your PS4 home-screen for months to come.

N++ is out now digitally for PlayStation 4. The publisher provided us with a code for this review.