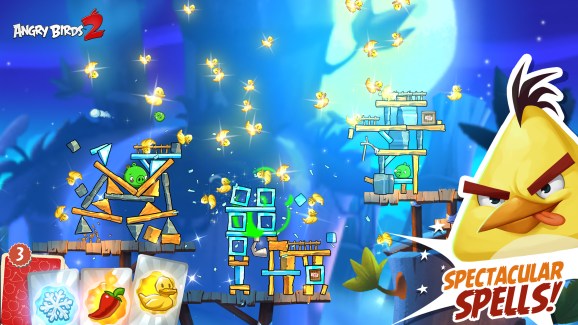 Ducks clear the board for you in Angry Birds 2.

Angry Birds creator Rovio today announced a major rounds of job losses as the studio admits it’s been doing “too many things.”

Despite the recent release of Angry Birds 2 on mobile — which has over 50 million downloads, according to Rovio — the Finnish studio says fundamental changes are needed in order to move forward with its ambition to be the “leading entertainment company with mobile games at its heart.” The first Angry Birds animated film — starring Game of Thrones’ Peter Dinklage — is currently in production, and that’s the one part of Rovio’s business that’s safe from plans for up to 260 job losses.

Rovio has struggled to replicate the initial success of its Angry Birds game despite releasing tie-ins with popular brands like Star Wars. Its revenue fell 9 percent to $170.6 million in 2014, and it previously cut 130 jobs last October.

Part of Rovio’s problem is that it’s diversified too much, according to chief executive officer Pekka Rantala.

“Rovio’s growth and eagerness to explore new business opportunities over the past few years has been exceptional,” said Rantala in a statement. “As a result, we did too many things. In our current financial condition we must now put focus on where we are at our best: in creating magnificent gaming experiences, in producing an amazing animation movie, and in delighting our fans with great products.”

Rovio is now starting negotiations for up to 260 job losses as it plans to restructure and focus on three primary business areas: games, media, and consumer products.

“This is personally a difficult decision,” said Rantala. “However, it is certain that a leaner and more agile Rovio is absolutely necessary to move forward and take the company to new successes in the future. We will work with and support all our employees through this period of change.”