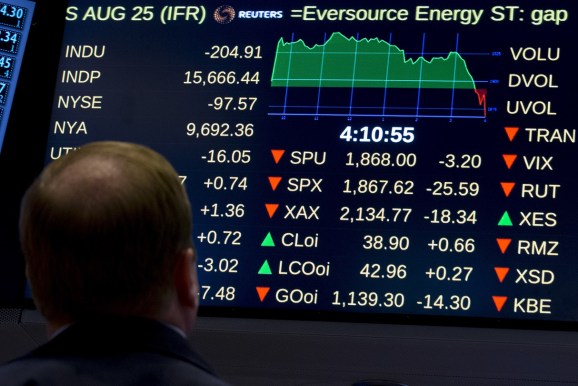 A trader looks up at a screen that displays the Dow Jones Industrial Average on the floor after the closing bell at the New York Stock Exchange August 25, 2015.

Last month, the startup world was chattering about free money, and founders and investors alike were on their toes driving growth at all costs and trying to push valuations to unprecedented heights. This week, after the Dow dropped 1,000 points to start trading on Monday, the same people are on their heels, worried the party might be over.

So what’s this all about? Why does the mood shift so dramatically every few years?

This is the economic cycle. If it hasn’t yet stolen all your hopes and dreams, it is guaranteed to at some point. It’s how paper millionaires become personal tax bankruptcies in a matter of months (yes, that happened to many people during the dot-com bust). We convince ourselves that we are extraordinary entrepreneurs and investors in the good times and that the same opportunities or talent aren’t credible in the bad times.

My advice to founders is, don’t waste time fretting about the market, as it is completely out of your control. This drop might be a temporary correction that we quickly forget, or maybe it’s an ominous portent of things to come. Most likely, the capital markets are going to become tougher than they have been in the past few years. So what does that mean to you?

You’re going to be judged unfairly

I remember trying to raise money in 2003, when tech was dead. It was the aftermath of the nuclear winter that followed the dot-com bust of 2000, and raising money for a new startup was nearly impossible. That year turned out to be the nadir of VC investing in the 2000s. Most of the $13 billion that was invested in 2003 was used to extend life support to the surviving companies born of the $100 billion invested only three years earlier.

As a newly minted business school grad, I was considered too green to run a credible startup, despite having previously built a profitable business. In 2003, venture capitalists didn’t want to invest in entrepreneurs who were under 35. We were the kids that had gotten them into all that trouble only a few years earlier. What was especially frustrating is that, just three years earlier, the very same investors didn’t want to invest in anyone older than 35. During the dot-com boom, the prevailing view was that only the really young entrepreneur had the ambition and native DNA to build great businesses in the “New Economy.” It was a time when business models that didn’t even make viable economic sense could get a company public in less than 12 months.

Investors will cling to safe signals in bad times

I remember pitching one particular investor who seemed enthusiastic to hear our pitch, but he explained that the previous pitch he’d heard that day was from a founder who had bootstrapped his company to $1 million in revenue already. He questioned how we could possibly compete for capital as a pre-revenue company that wouldn’t see any sales for at least another year when he had the opportunity to invest in a company with meaningful revenue.

I was confused by his analysis and believed that this company’s modest traction was dwarfed by the vastly greater potential of my company, but I politely acknowledged the facts. I remember walking out thinking that the consulting company I had founded previously had had double the revenue but should never have been venture-backed due to the lack of scalability. From my own experience, I didn’t understand what lacking $1 million in revenue had to do with whether we were backable. These were dark days indeed.

I’m a glutton for punishment. In 2009, when David Frankel and I started Founder Collective, the environment felt a lot like 2003. The financial crisis had sapped all of the enthusiasm out of investors, who again were behaving like the world was coming to an end. Most of the potential limited partners we pitched were pretty skeptical of the venture asset class and certainly didn’t want to back new managers.

One well respected limited partner told us the only new VC fund he was backing was Vinod Khosla’s, because his track record of success was something that he could hang his hat on in difficult times. Other investors told us that the secondary opportunities were too attractive or leveraged debt opportunities were too rich to waste time with new venture managers. Some of them simply had no money to invest. Overall, investors looked at David’s deep angel track record as remarkable but as having little to do with running a credible venture fund.

After one LP pitch on Sand Hill Road, I remember David and I were so deflated that we just started laughing uncontrollably at the absurdity of the conversations. We were laughing so hard that we couldn’t even start the car to head to the next meeting; being late didn’t matter anyway, because the next meeting would end up just as bleak as the one before. We were the kids again; too young and inexperienced to be credible to sophisticated investors. We weren’t a safe bet; the fundamentals weren’t on our side. Luckily, we found a few people who knew us well and took the leap of faith.

When times are good, investors “floor it”

Just a few years later, investors started leaning forward on their toes again. Everyone became afraid of missing out. Now there are over 200 seed stage funds, up from 30 when we raised our first fund. Unicorns are everywhere. Growth is king, profit is unimportant, and investors are dreaming really big.

When times are bad, they slam on the brakes

In negative economic times, we are on our heels and tend to focus on risk. We cling to marginal signals like small revenues and the age of entrepreneurs as signs of safety that make losing money seem less likely.

We spend more time thinking about underwriting risk than searching for outlier successes. We have trouble dreaming big because we vividly remember Pets.com’s Sock Puppet commercials and WebVan’s excessive infrastructure instead of recalling Amazon overcoming the dot-com bust. We start saying things like, “That’s been tried before and it didn’t work.” We vow not to make the same mistakes again. No matter what the macroeconomic environment looks like, few are able to remember the bad times during the good, and vice versa.

The Internet has changed the world

The Internet boom was real, it changed all of our lives, we all just got too excited early in the dot-com era. Even in the face of this possible stock market correction, mobile, cloud, IoT, on-demand services, the block chain, and many tech trends are exciting and will have major lasting impact.

But none of these innovations will make it through a hype cycle unscathed. Sometimes we’ll be behind the cycle, as in the tech nuclear winter after the dot-com crash that spanned 2001-2005, and we will not notice the amazing things that are happening. Other times we’ll be ahead (think last month) and will be over-hyping the inspiring things that are happening. The times that we’re behind create extraordinary opportunities for founders and investors to see early what others will only chase later. The times when we’re ahead eventually lead to meaningful economic displacements and the rebirth of cynicism that drives investors back to their heels.

So what’s a founder to do given that investors seem to move from their toes to their heels and back again? My best advice is to understand that the economy is cyclical and that change is inevitable. The amplitude of the peaks and valleys may be deeper or more shallow, but they will always return.

Some of the most successful companies of the modern tech boom were passed on by dozens of investors before raising money. Batting averages are lower in tough times, and founders need to be prepared for even more rejection before finding the true believers.

Look our for second order impacts

Your balance sheet might be fine, flush from a recent fundraise, but what about your customers? How will a global financial slowdown impact them? Economic slowdowns inevitably make sales harder. Consumers make fewer discretionary purchases when their net worth falls, and businesses make cuts when they are less profitable. To survive, founders might have to diversify their sales efforts or start to work on a new product that will satisfy a counter-cyclical need. Most clearly, the emphasis on growth before all else will shift as companies hope to rely less on expensive capital markets and instead try to shape their own destiny.

Whether now or later, investors will be on their heels again; instead of dreaming that you will return a thousand times their money, they’ll be grasping for fundamental evidence that you’re not going to lose one times their money. Be prepared for that moment.

Eric Paley is a managing partner at Founder Collective, an early VC firm that has invested in over 150 companies including Uber, Buzzfeed, Makerbot, PillPack, and Seatgeek. Previously, Eric was cofounder/CEO of Brontes, which was acquired by 3M.