As expected, Apple will hold its fall press event at the Bill Graham Civic Auditorium in San Francisco Wednesday September 9.

Apple sent invites to the event out today.

Apple included in the invite the information that Siri might be helpful in finding out about the event. It said “Hey Siri, give us a hint!” When you ask your iPhone that question, this is what you see: 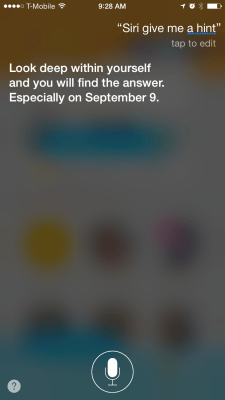 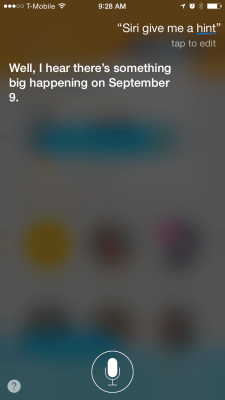 Apple is expected to announce the new iPhone 6S and 6S Plus, and may announce a new Apple TV as well.

The new iPhone 6S and 6S Plus phones are expected to sport several significant improvements over the existing iPhone 6. These include a 12-megapixel camera and a sapphire screen with Force Touch and haptic feedback.

Many of the iPhone 6S’s feature upgrades are meant to bring the iPhone back into parity with premium phones from companies like Samsung, HTC, and LG. But one big upgrade is likely to be missing, according to source with knowledge of Apple’s plans: While the iPhone display has fallen well behind those on rival phones in both brightness and image sharpness, the iPhone 6s isn’t likely to see a great leap forward in display quality.

The new iPhones are not expected to sell quite as well as the iPhone 6, which was the first Apple phone to offer a larger screen in years. But then, the 6 is a hard act to follow. After the launch of the iPhone 6, Apple sold 74.5 million iPhones in the final quarter of 2014, a new record. In the following quarter, Apple sold 61 million iPhones, which is seasonally slower.