The chief goal of character design in a MOBA or team brawler or lords management game is variety. You want a new character to feel and look different from the other characters in the game first, but you also want the hero to have different builds and playstyle possibilities. Blizzard has been getting better at that with its debutantes in Heroes of the Storm recently — Sylvanas, The Butcher, The Lost Vikings, and Leoric are notable successes — but it may have outdone itself for variety with last week’s addition: Kharazim, Diablo 3’s Monk.

Variety shows up immediately in a game with the Monk. Heroes of the Storm always offers a skill choice at the start of a match, but Kharazim’s is more important than just about any other character’s. Every third basic attack gives you a buff — health to the most needy nearest hero, or mana, or a critical hit. Each of these sets up a very different potential role. 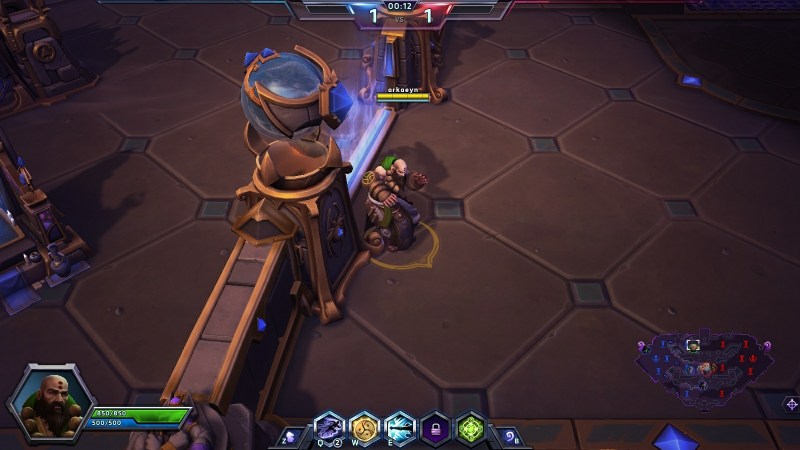 Above: Crouching Monk … no hidden dragons

Kharazim is a member of the Support class, one of Heroes’ healers. Healing is a tricky thing in any game where that’s the only thing a player can do — it often turns into just looking at green bars and clicking the lowest one. For a few heroes — Uther and Malfurion — this is the case. But it also tries to have more variety. The Pandaren character Li Li, for example, tosses a healing brew at the character with the lowest hit points when you press the button, while the faerie dragon Brightwing automatically heals everyone around it at certain intervals.

The problem is that the less control a healer has over their healing, the less interesting a match is. It’s easy to play Li Li as just hitting the healing ‘Q’ button over and over — although advanced players can certainly do much more with her. Brightwing, on the other hand, has gone from one of the most popular (and fun!) healers to play to a total disaster after a recent patch took away almost all of her direct control over her heals. She can still help, but in ordinary situations, simply being present is enough — and that’s not fun.

The Monk is the total opposite of that now-boring Brightwing construction. By attaching his core power to repeated attacks, Heroes of the Storm brilliantly makes every individual fight about getting Kharazim into position to brawl, safely. In an ideal situation for a healer, finding a safe target to beat on will get every local ally in better shape, quickly. Or if you’ve gone for an attack-based Monk, you find and target an enemy and do as much damage as you can before getting out. Either way, with the Monk, you’ll be jumping around combat, trying to find the right balance between safety and effectiveness. Every team fight is tense and fun. 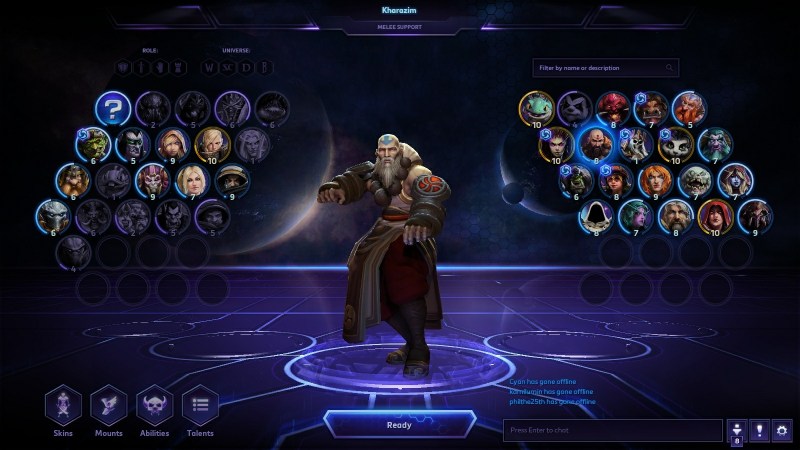 Above: Kharazim’s skill tree is a handful.

Kharazim’s skill tree also encourages even more variety as matches progress. Several of his skills increase his speed of movement and attack, allowing him to be a more damage-based assassin/healer. Still others improve his Breath of Heaven skill, a simple group heal. So even if you’re trying to be a pure healer, you can build that around fast attacks — and even an initial assassin can build for more healing ability if the situation calls for it. I love building for speed regardless of my role, but it can be dangerous.

His heroic abilities are also fascinating, and again, prove more situational than “perfect build.” His “Divine Palm”is a great way to keep teammates alive, but the timing has to be just right, making it surprisingly easy to waste but can swing a battle if pulled off. The other, the “Seven-Sided Strike, attacks all enemies in its radius, but damages the highest-health of them and does a percentage of damage. In short, it’s an attack that’s deliberately set up to take out enemy tanks, and it’s less effective the more enemies are inside its area of effect, which makes its use a really interesting dynamic.

Blizzard’s success with its new heroes may have some unintended side effects. It’s hard to imagine choosing to play Brightwing, who heals in a roughly similar fashion to Kharazim, after the new hero so thoroughly overshadows her in entertainment terms. But this shouldn’t take away from the new character’s success: the Monk is, almost immediately, one of Heroes of the Storm’s best characters.