Last year, Hitman Go made an excellent case for how many video game genres are far more simple than we think they are. It turned stealth into a board game, and it succeeded more triumphantly than it had any right to.

Out today for iOS (reviewed), Android, and Windows Phone, Lara Croft Go does the same with Tomb Raider. It takes the series’ tenants of puzzle-solving, exploration, and discovery and makes them as simple as possible. And like Hitman Go before it, it’s one of the most entertaining lessons is bare-bones design anyone can take.

Lara Croft Go lets you do just about anything you’d normally be able to in a Tomb Raider game. You climb up and down walls, jump between moving platforms, activate switches, shoot some animals in the face and throw spears at others, solve puzzles, and explore temples. The difference is that all of these actions all require only a swipe; every level takes place on a grid. You move one square at a time, with  enemies and objects in each level taking their turns right after you do. You don’t have to time your jumps or aim your guns, yet you’re still able to maneuver Lara in much the same way you would in any other Tomb Raider game.

The narrative follows a similar mandate; it’s your average Tomb Raider tale, minus all of the voice acting, text, or direct storytelling. Lara enters a temple, finds treasures within it, and fights the monsters protecting them. It doesn’t dive as deep into Lara’s characters as the recent reboot has, but besides the character study, it has everything you could want from a Tomb Raider game. That it all fits within the board game framework is again a testament to how versatile both Tomb Raider and board games are when you think about them in new ways.

One of the biggest issues I had with Hitman Go is that along with its emphasis on clever maneuvering, it also valued efficiency. This fit well with Agent 47’s cold ruthlessness, but it made for some difficult puzzles and a level unlock system that forced you to beat every level “correctly” in the fewest turns possible in order to proceed to later levels.

Lara Croft Go doesn’t have these problems. Rather than having you unlock levels by beating previous ones, you find artifacts hidden in each stage’s scenery, in a cliff or under a platform (as you soon as you see them, just touch them). You can take as many turns as you like to solve every level without feeling like you won’t see everything the game as to offer. All the artifacts do is unlock new outfits for Lara, so as long as you can solve the puzzles themselves, you’ll play through every level.

It has a great difficulty curve

Lara Croft Go emphasizes cunning and exploration, not challenge, but this doesn’t make it a pushover. I hit some mental blocks later on, not sure that I had tried every option and trying minor variations of what I was already doing instead of looking for new solutions. But the way the board game conceit works, you’ll always find the solution as long as you take a look at all your options and go through them, one by one. It’s never anything ridiculous, and since you don’t have turn limits, you’re free to explore every option at your leisure. As long as you’re diligent, you won’t find yourself stuck for too long. The puzzles are enough to challenge you, but not leave you frustrated on your commute to work. 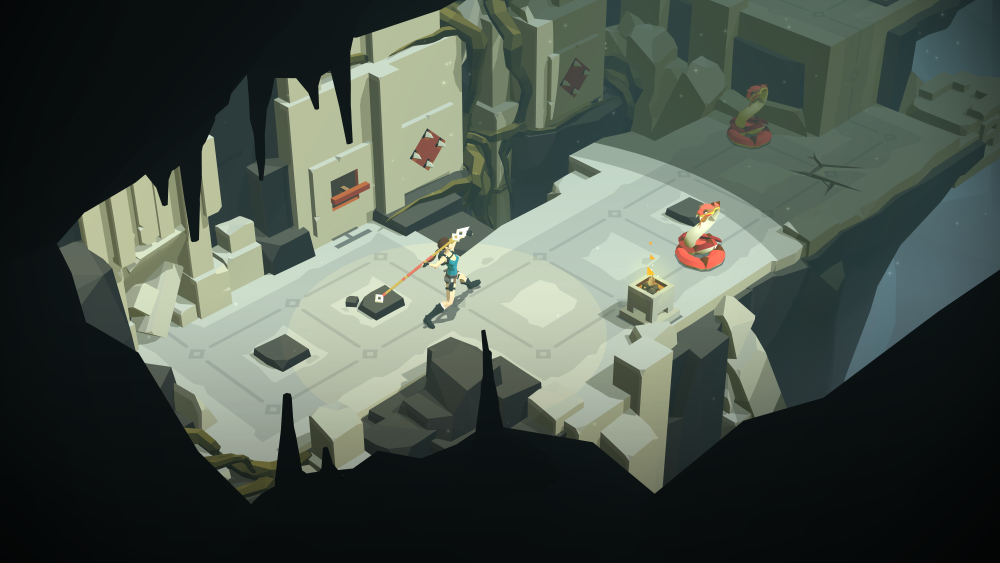 Above: Despite the simple interface, Lara Croft Goes lets you do just about anything you would in a Tomb Raider game.

This idea still has untapped potential

As much as I think the difficulty curve fits the goals well, I couldn’t help but think this idea had more potential than the levels showed. While you make use of several of the staples of Tomb Raider, I wanted the game to dive a bit deeper, to experiment with more ideas. How could swinging from ropes work in the board game format? How could some of the other kinds of puzzles from Tomb Raider games fit in? Square Enix Montreal has a lot to explore here, and the current set of levels, while engaging in their own right, left me feeling a bit empty. I went back looking for some treasures I’d missed just so I keep playing a little longer.

Lara Croft Go furthers the case for looking at familiar gaming archetypes and doing something new with them. Hitman Go wasn’t just a one-off — when you take a step back and look at the core elements of what make a certain game or series what it is, you’d be surprised how much of the fluff you can leave out and still have something great. The idea still has some potential to grow, but the results of Square Enix Montreal’s experiments with it should keep me entertained and wondering what how much further it could stretch.

Lara Croft Go is out for iOS, Android, and Windows Phone today. Publisher Square Enix provided GamesBeat with a free download code of the game for this review.