I have a confession to make: The very first thing I did when I fired up Disney Infinity 3.0 on my Xbox One (out August 30 on PlayStation 4, Xbox One, Wii U, PS3, and Xbox 360) was start split-screen multiplayer in the Toy Box and have Yoda try to use his lightsaber to dismember Mickey Mouse. The toughest hero with big ears you are not, Mouse.

Much to my dismay, I was unable to chop off any of his limbs.

Disney Infinity 3.0 is, as you may have guessed, the House of Mouse’s third foray into the increasingly crowded toys-to-life game category. This time, though, Disney brought with it one of the most popular licenses: Star Wars. I played the starter pack, which features the Twilight of the Republic Play Set. It includes characters and settings from Star Wars Episodes I-III and The Clone Wars animated series (additional figures from the Star Wars: Rebels show are also available to play in this set, provided you collect the hidden crossover coins scattered throughout the levels). 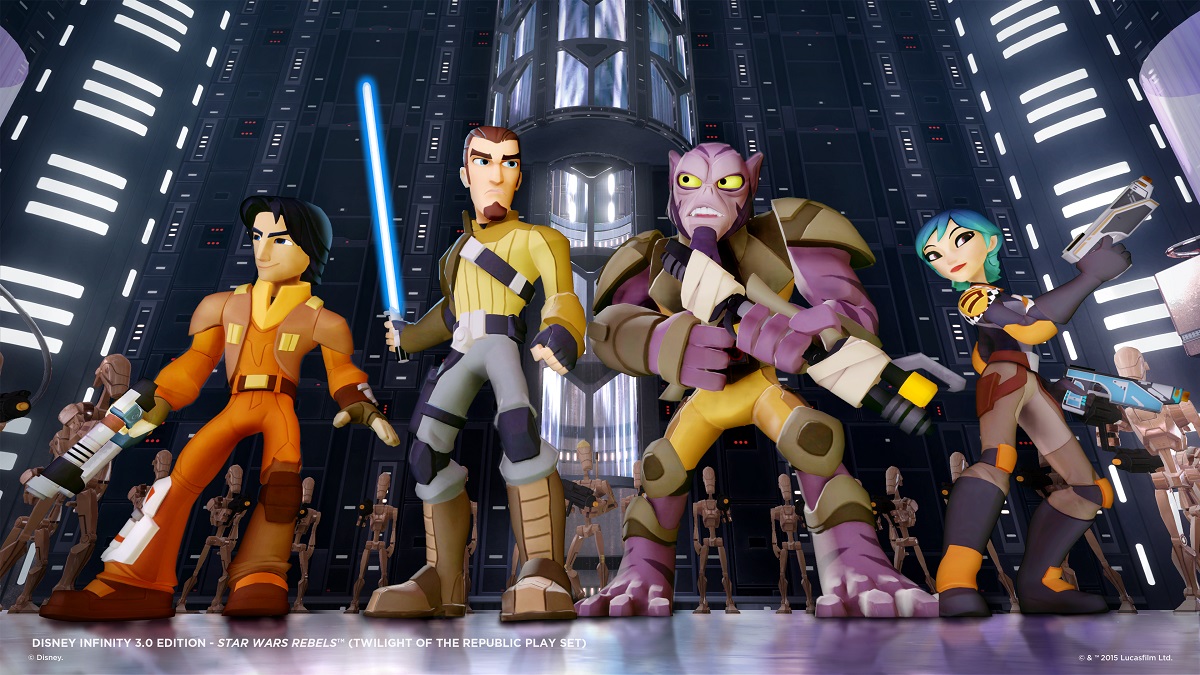 Above: If you like Star Wars: Rebels, you’ll be happy to know all these guys are playable in Disney Infinity 3.0.

Disney also tapped developer Ninja Theory (known for the combat-heavy DmC: Devil May Cry and Heavenly Sword) for work on this Play Set. The result is a combo-filled, nuanced lightsaber combat system full of aerial combos and guard breakers that belies the game’s cartoony exterior.

Aside from the excellent treatment with this first Star Wars Play Set, Disney Infinity 3.0 also includes a greatly improved Toy Box mode that’s loaded with minigames, challenges, building tools, and all sorts of extras. You’ll find new features such as sidekicks, farming, and something dubbed INterior, which is an indoor living space you can customize and decorate as you wish.

All of these new features and the top-notch development help Disney brought in combine for a robust game that’s almost guaranteed to have something that will interest even the most discerning or picky gamer.

The best Toy Box yet

The new and vastly improved Toy Box mode includes so many features, it’s almost impossible to discuss them all in the confines of this review. The Toy Box hub area starts off as a colorless world, and certain areas color themselves in and introduce you to new features as you talk to and perform quests for various Disney-themed NPCs. Portals here take you to different areas that let you tackle a wide variety of tasks, such as combat challenges, an online multiplayer arcade, races, exploration, and treasure hunts. 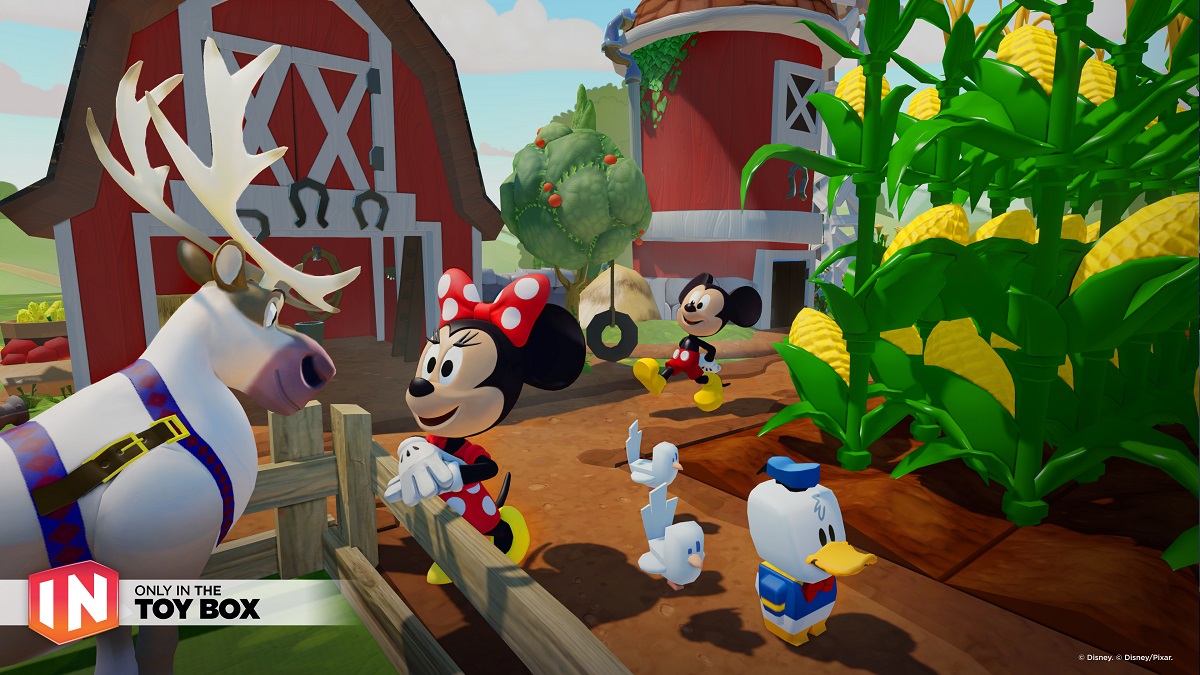 Above: The Toy Box Hub offers many things to do — even farming.

One of the additions I particularly enjoyed was the sidekick system. This lets you find, recruit, train, and customize cute, small versions of various Disney characters. Part of this process includes a simple farming simulator, where you grow various foods to feed to and increase the stats of your sidekick. The first I trained was Robin Hood (the anthropomorphic fox from Disney’s animated version). Instead of a bow, however, I gave my Robin Hood a rocket launcher. Perhaps this was a little less sporting of me, but I found it effective.

Also included is the expected (and improved) building system that lets players create their own levels and games. While this is something I need to spend more time with to fully appreciate, I did notice that it did contain better pathing and logic options than past versions, which should improve the programming of dynamic events and cutscenes. Another new feature is the ability to use instruments and toys to create your own music.

As opposed to Disney Infinity 2.0, where all I wanted to do was jump in to the various Marvel-themed Play Sets, in 3.0 I found myself spending far more time in the Toy Box Hub area, trying to explore the myriad of tasks provided. I gained several levels on a few of my characters just by running around the hub and finding new things to do.

The Twilight of the Republic Play Set is essentially a full Star Wars game in its own right. After you complete a series of initial missions in a droid factory on the planet Geonosis, you unlock a larger Star Wars galaxy to explore. You’re able to fly to (and fly ships in the space above) several planets, each of which is its own hub for missions, sidequests, and secrets to find. 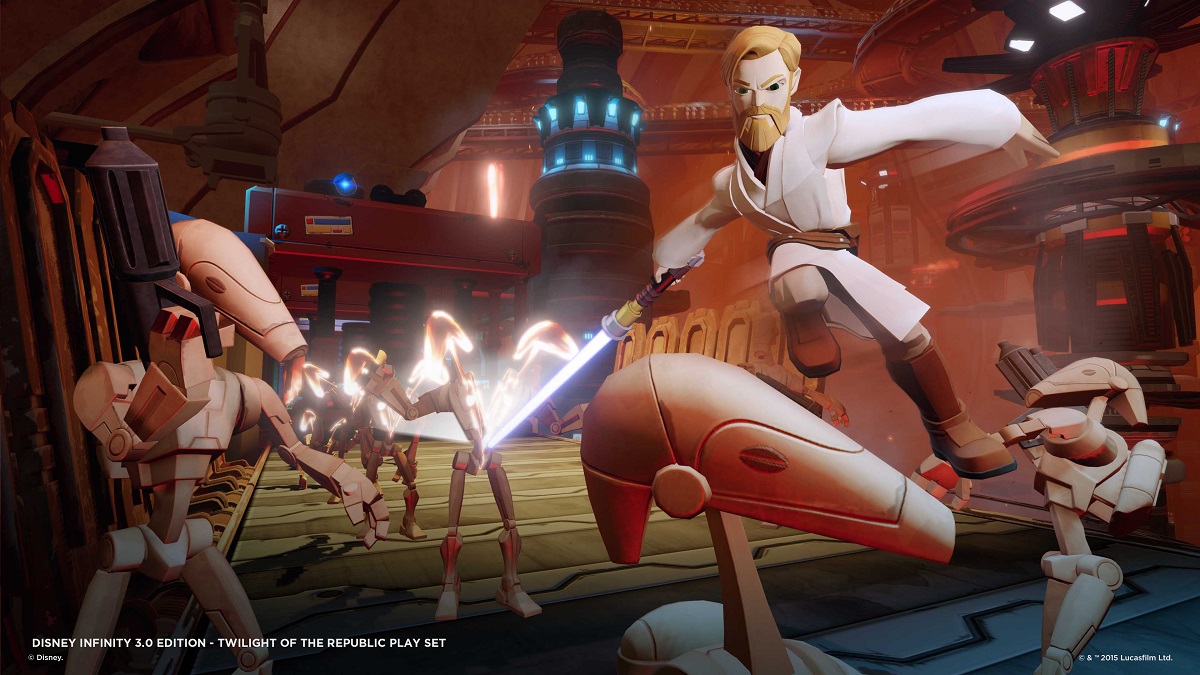 Above: Yes, you can actually cut droids in half with your lightsaber. Sadly, this doesn’t work on Mickey Mouse.

The missions (larger, multipart quests) even have their own goals and optional achievements, and you can replay these at any time you wish after initial completion. Some of these optional goals include completing tasks in a set amount of time or with a specific character. Each world offers many people to talk to, secrets to find, and nooks to explore.

As mentioned above, the combat has leveled up, and each character seems unique despite the fact that most of them have lightsabers.  Fighting is more free-flowing here, and much like the games in the Batman: Arkham series, you can push your analog stick in the direction of a different enemy while mashing the attack buttons and chain together large combos as you take out a whole room full of foes without stopping. The system is both easy enough for button-mashing kids to kill things and complex enough for adults to find it interesting and fun — they may time their button presses to perform even more deadly special attacks. And if you decide you want to play without any children present, a convenient setting allows you to ramp up the difficulty and add to the challenge.

The space above each planet lets you pilot various Star Wars ships, shoot down enemies, and complete additional tasks. While the space combat was pretty simple, I still found it enjoyable and good for breaking up long stretches of running around on the ground. These space sections provided a little more variety and kept me playing for longer stretches than I did with the Disney Infinity 2.0 Marvel Play Sets. 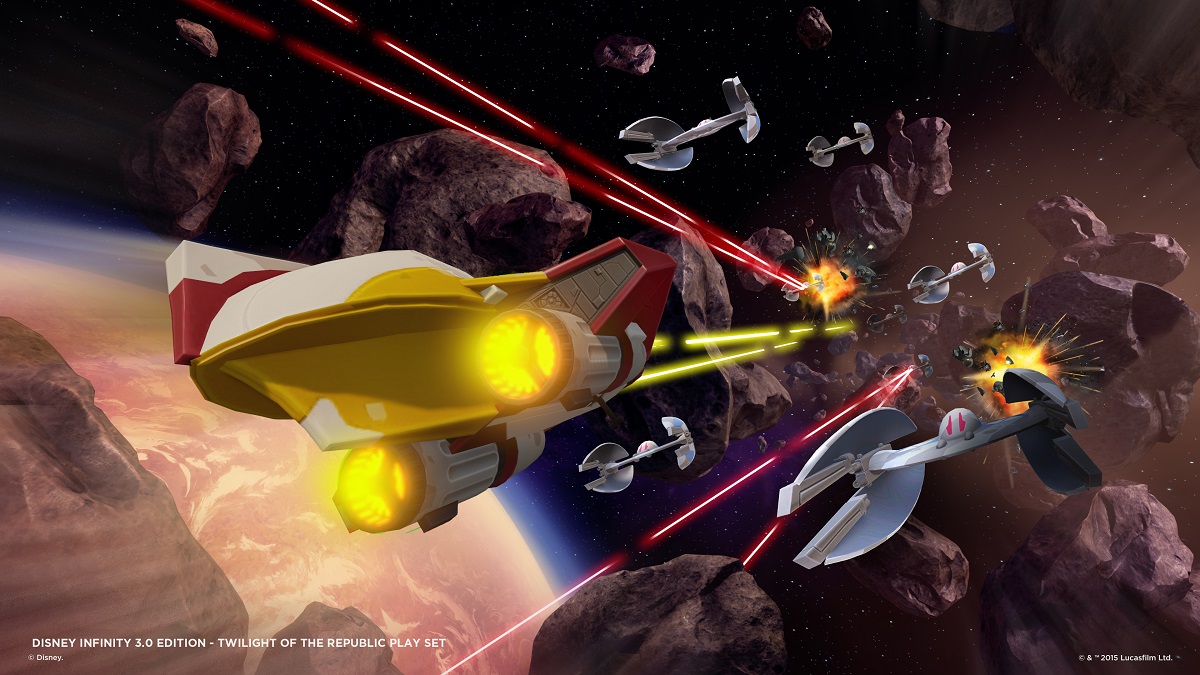 Above: Space combat isn’t overly complicated, but it provides a nice change.

I may offend Star Wars purists

In addition to the generally cartoonified characters, Disney Infinity 3.0 does also take some liberties with the Star Wars universe that some fans (myself included) may take exception to. For example, the interactive introduction that you must play when you first start ends with an older Anakin Skywalker coming face-to-face with a fully intact Darth Maul. In case you’re not familiar with the stories, Obi-Wan Kenobi chopped Darth Maul in half in Star Wars: Episode I — The Phantom Menace and knocked him in a rather deep hole. Although Maul actually survived and returned later in The Clone Wars series, he had mechanical legs by then.

Another such brain-tweaking item is the statement by Disney that all Star Wars characters will be playable in all Star Wars Play Sets. This sets up the potential of having young Anakin Skywalker fighting alongside his daughter (Princess Leia) or even himself (as Darth Vader).

Then, of course, there’s the silliness that comes from anything or anyone surviving more than one hit from a lightsaber. Yes, I’m still mad that I couldn’t cut off Mickey Mouse’s arms. I understand it’s a game and concessions had to be made, but come on. 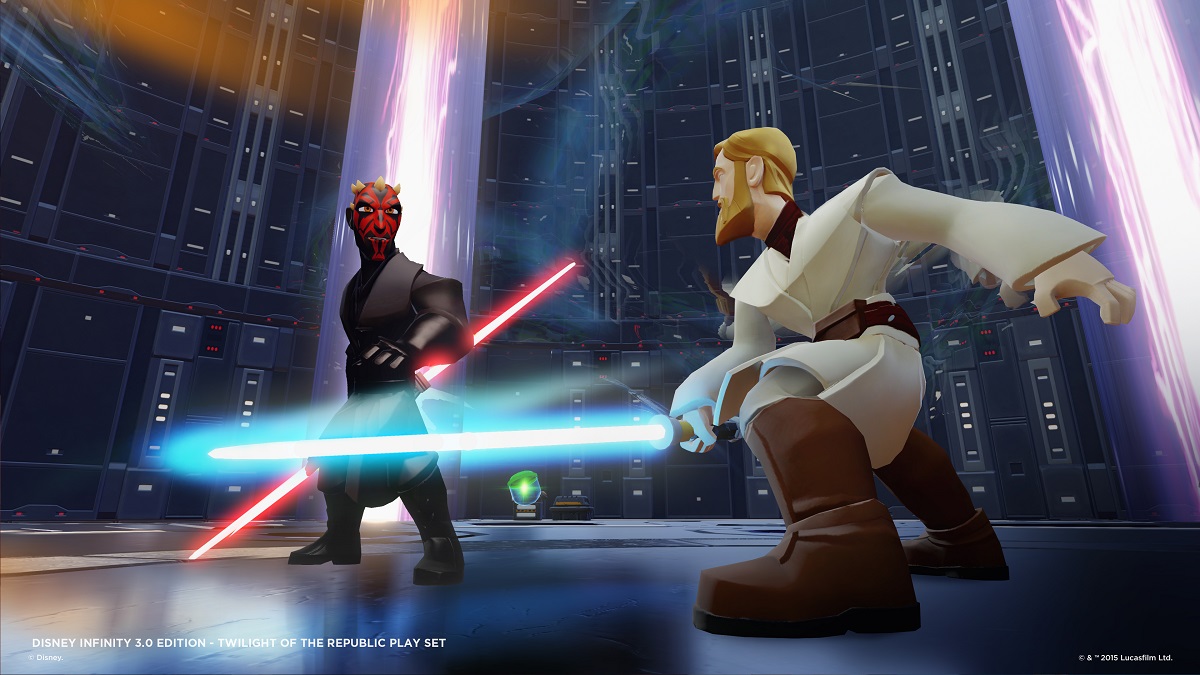 Above: “Wait. Didn’t I cut off your legs a few years ago?”

I did encounter a couple of bugs while playing. A few times, it locked up on me completely, and I had to restart, which caused me to lose unsaved progress. One odd side effect of this was text appearing on the screen telling me to interact with an object that I had unlocked before the crash but wasn’t actually there yet upon reload.

On at least three occasions, it informed me that I needed to reconnect the base to my system, despite that I hadn’t disconnected it or moved it in any way. One of these times, I was forced to quit the game and reload it, again losing unsaved progress.

One final but frustrating bug I encountered was a persistent and severe framerate drop. Thankfully, Disney was responsive when I reported this issue, and we were able to conclude by working together that it was caused by the combination of me being online but not having a current Xbox Live Gold subscription. This was a known bug that only affected the Xbox One version, and they assured me that a patch would address this issue before the North American launch on August 30. (Just for reference: On the off-chance that this is not patched before the retail release, my solution was just to play offline while enjoying the single-player content. Split-screen, local co-op is still available offline, and that is still my preferred way of enjoying multiplayer in this series.)

Disney Infinity 3.0 is an improvement over its predecessors in nearly every conceivable way. While it is still features a cartoony style that doesn’t quite push the limits of modern consoles, it is an enjoyable game (especially if you have children to share it with) with as much content as the Death Star has destructive power. Despite a few annoying bugs, I found myself returning to the game over and over every time I had a spare moment. I have a very bad feeling about how much time my son and I are going to sink into this game and about how much money I’m going to spend on additional Play Sets and figures. 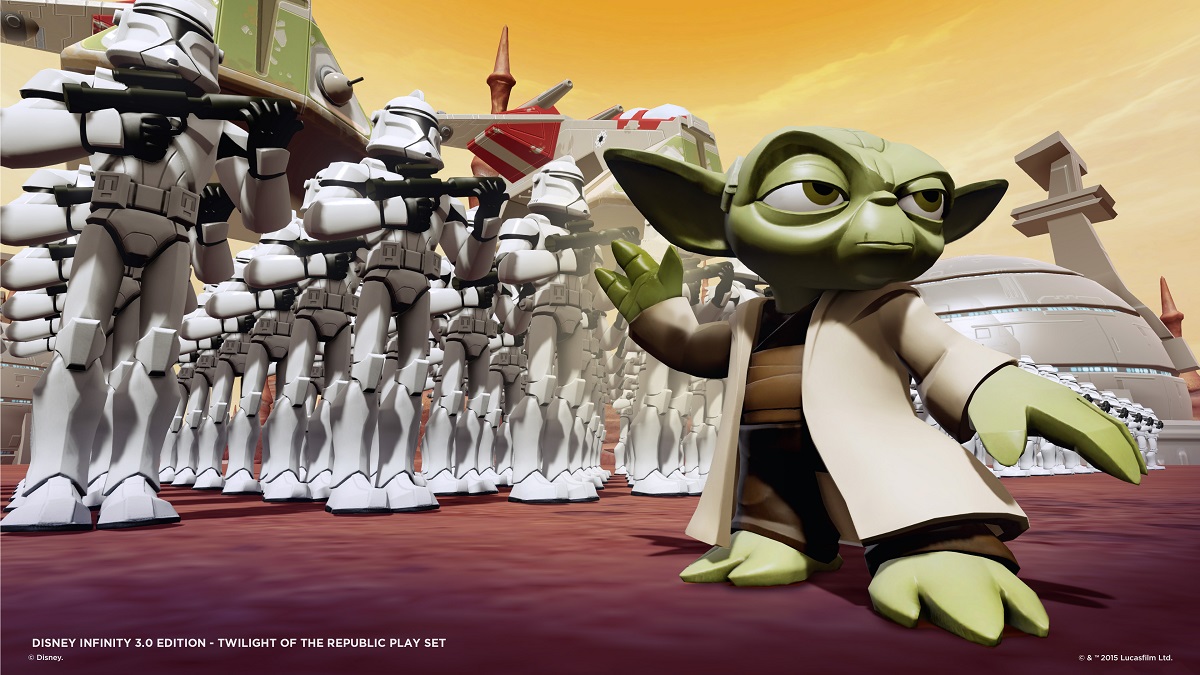 Above: Destroy the mouse, you must.

Disney Infinity 3.0 releases on August 30 for Xbox One, PlayStation 4, Wii U, PS3, and Xbox 360. Publisher Disney Interactive Studios provided GamesBeat with a copy of the Starter Set and additional figures for this review.