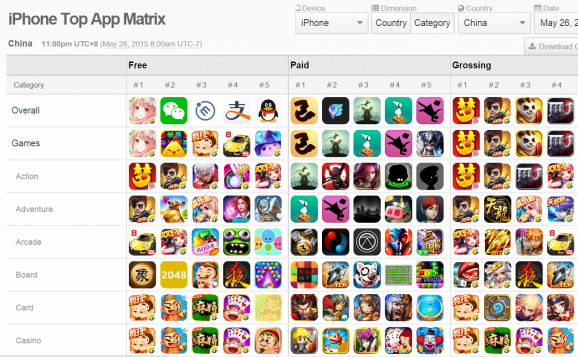 The top games and apps in China.

China’s enormous population is giving it spending power that will outstrip even consumers in the United States this year in certain sectors — such as mobile gaming.

Smartphone and tablet games should generate more than $5.5 billion through the end of 2015, according to a new report from Asia market-intelligence firm Niko Partners. That is a huge chunk of the $30 billion that people spend on mobile gaming worldwide, and it is also a 66 percent year-over-year increase from $3.3 billion in Chinese spending last year. And this makes China a bigger spender on mobile gaming than the United States. Obviously, that kind of money has to look enticing to game developers around the world, and that’s where Niko comes in with its full 2015 Chinese Mobile Gaming Report.

“We believe that games become popular because they fill a void for gamers,” Niko founder and managing partner Lisa Cosmas Hanson said in a statement provided to GamesBeat. “It is important to evaluate what voids there are in Chinese culture, and then match game development to those as well as to the gamer behavior and characteristics of a good mobile game in a popular genre.”

Hanson notes that social-casino apps are extraordinarily popular in China. Gambling is illegal in that country, but people still want the thrill of making bets and winning cash — even if it’s virtual.

“With [a focus on filling voids] mobile game developers may find their way to the next big Chinese hit game,” said Hanson. “Because hoping to make it big with an international title lobbed to a Chinese publisher for localization is not an effective path to success.”

Put differently, China is a convoluted market with several barriers to entry even for some of the biggest developers in the world. That’s why, despite China’s spending, most developers will still have an easier time finding success in the United States and other Western territories.

The problem with China is that success is nearly impossible without a local publishing partner. Android is far more popular than iOS, but Google’s Play Store does not have a significant presence. Instead, dozens of companies run their own app-distribution channels. And developers need publishing partners to help it forge the deals to get onto those stores.

And then there is average revenue per player (ARPU). Yes, China’s $5.5 billion is a far larger number than the $4.5 billion that U.S. mobile gamers will spend this year, but that is largely due to the 420 million people who play mobile games in China. That’s nearly 100 million more than there are human beings in the United States. Estimates put the number of mobile gamers in the U.S. at around 165 million in 2015.

The difference in gaming populations means that developers will have an easier time squeezing cash from players in the U.S. That’s because the average revenue for each Chinese player is only worth $13.10 compared to the $27.27 value of an average U.S. player.

The ARPU alone probably wouldn’t scare most developers away from China, and indeed it doesn’t. But when combined with the smaller cut of revenues, the corporate maze to release a game in China, and the rough competition (studios release thousands of games every month and most fail), it’s easy for developers to find reasons to put off entering the world’s biggest market for mobile gaming.