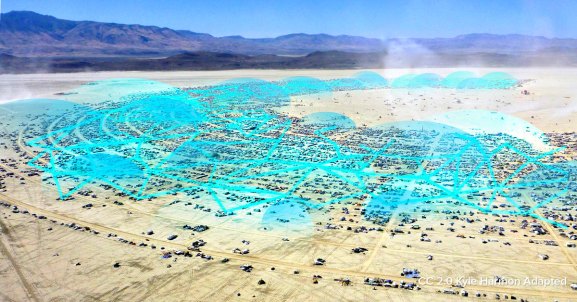 Firechat lets people at Burning Man stay connected to each other.

Going off the grid isn’t what it used to be.

Thanks to FireChat, a peer-to-peer wireless networking app created by Open Garden, thousands of attendees at this year’s Burning Man are now staying connected to each other through their smartphones. Once upon a time, making the trek to the annual festival in the Nevada desert meant leaving behind the ease of modern communications, but with FireChat, those iOS and Androids phones can still keep you connected to other attendees (assuming you can keep the devices charged).

“It’s a great tool when you have lots of people who share a common purpose,” said Micha Benoliel, chief executive and cofounder of Open Garden, in an email interview. “This is an open communications network that does not require any infrastructure or management.”

Founded more than four years ago, Open Garden created FireChat to offer a different way for users to construct wireless networks. Users download the app, and then it finds other nearby FireChat users via the phone’s Wi-Fi and Bluetooth. Fully encrypted private and public messages and pictures can be sent via this mesh networking, hopping from one FireChat user to another until they’re delivered to the intended recipient.

This ability to connect without using telecom carriers has made the app incredibly popular among people who want greater privacy. During last year’s protests in Hong Kong, the app was downloaded hundreds of thousands of times and was credited with creating a communication system that local authorities couldn’t monitor or block.

A few months later, Open Garden raised $10.8 million to continue expanding the reach of FireChat. The app has become popular at large concerts and festivals. And the company also hopes to use it to bring networks to people in regions with little or no wireless network access.

Of course, people have been finding ways to get connected at Burning Man almost from the beginning. People have always brought generators and satellite Internet gadgets to the playa. Or they’d just bring along basic walkie-talkies.

But walkie-talkies allow for a limited number of connections, while FireChat can keep people connected to thousands of fellow attendees. While FireChat doesn’t connect to the Internet to let people just surf the Web on their phones, users can send messages and photos to each other at the event.

Because users don’t directly access any servers, Open Garden doesn’t directly monitor usage, and therefore can’t say how many people at Burning Man are currently using the app. However, the company noted that last year 4,000 people joined a special Burning Man chatroom, and the company is expecting that number to increase this year.

Last year, people were using it to share news and updates in the days ahead of the event, sending warnings about heavy rains last year.

This year the FireChat service on the playa will be more robust. The company has updated the app to include a “store-and-forward” feature. If a message can’t directly travel between two people because there are gaps in the mesh network, it remains stored on different FireChat phones until it can be passed along to its intended target.

Open Garden also announced a partnership this year with Hub Culture, a tech organization promoting virtual experiences, which has erected a wind-powered communication station at Burning Man to amplify the FireChat mesh network. The goal is to let more people be connected at greater distances.

Of course, being more connected at Burning Man will be great for some attendees. But for others, it will be a sign that the festival isn’t as good as it used to be. Which, come to think of it, is the same complaint people have every year but which never seems to stop Burning Man getting bigger each year.

Here’s a bit more about how FireChat works: