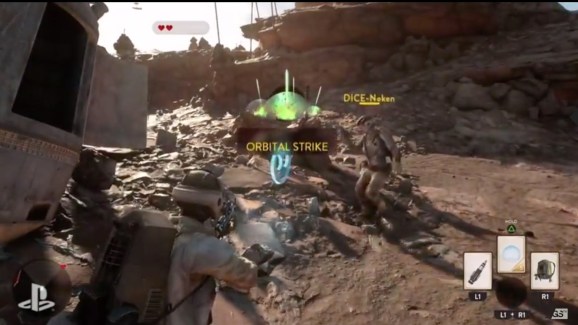 Developer DICE is on to something with Battlefront.

Publisher Electronic Arts is playing a big part in the relaunch of the beloved Star Wars franchise, and anyone with a PlayStation 4, Xbox One, or PC will have the opportunity to test out that future.

EA has confirmed to GamesBeat that the beta for Star Wars: Battlefront is open to everyone on all supported platforms. The company announced earlier today that it will launch the test for its Star Wars shooter in early October, but it didn’t say exactly how it would roll out invites. The reason it didn’t do that is because it will have no invites; the publisher is jumping straight into an open beta where anyone can download the test version of the game and start playing it before its official November 17 release.

First, it will give developer DICE a good idea of how the game will handle a huge number of players. This is crucial because DICE has a reputation for releasing multiplayer shooters with busted online infrastructures, although it has done a lot to repair its most broken games like Battlefield 4.

Second, this will put a free demo in front of thousands — if not millions — of gamers who may end up buying the game after getting a taste.

Other shooters have seriously benefited from running beta tests in the past. Publisher Activision’s Call of Duty series, which is one of the best-selling franchises of all time, exploded in popularity after a beta for Call of Duty 4: Modern Warfare caught on with fans back in 2007. EA could see something similar happen with Star Wars — especially since it isn’t gating this test to boost its preorder numbers.