People often describe fighting games as a combination of speed chess and poker (and other, more convoluted mashups). Take the intricate combos out of a good fighter and you’ve got a complex guessing game where you mentally juggle several options at once — attacks beat walking forward, blocking beats attacks, walking forward beats blocking, etc.

The fighting card game Yomi, which has been out since April of this year on Steam, distills the genre down to this guessing game, mixing the various options of fighting games with some elements of poker and collectible card games. The results don’t map perfectly, but if you want to learn how to read your opponents instead of just pressing the heavy attack buttons in Street Fighter, Yomi’s a good place to learn.

It’s a turn-based fighting game, through and through

Yomi takes the most important options of a fighting game and turns them into cards: you have attacks, blocks, throws, and dodges. Blocks and dodges beat attacks, throws beat dodges and blocks, and attacks beat throws. Rather than have players take turns, both choose one card from their hand to play simultaneously, like the classic card game War.

Land a throw, hit with an attack, or dodge one, and you can follow it up with a combo, which uses a combination of arbitrary limits and poker hand logic: string together a series of attacks that are also a flush and you’ll draw an Ace from your deck (the equivalent of a super attack). As with any card game, it has tons of exceptions to these rules, and you’ll learn how to use your character (every deck comes pre-built around a central fighter) to bend the game to your whims.

It plays out in such a way that you’re making educated guess after educated guess, all based on what your opponent has done before. If someone plays a three blocks in a row, do they really have the gall to play a fourth? Do they even have a block in their hand? Every card is double-sided, and most give you two of the game’s four options to choose from, so it’s always possible. Or consider the last turn they discarded three of the same card to draw two Aces (which anyone can do at the end of their turn). Will they play them this turn? They’re pretty low on health, so they might just go for the Hail Mary.

The end result is the exact kind of mind games you’d find yourself playing a in a fighting game, and in that sense, Yomi is a success.

The price scheme is (kind of) simple

On Steam or iOS, you’ll have to pay an initial fee to get started. But enter through the online web client and you can play a single character for free. The initial payment gets you 10 characters, and another $15 gets you 10 more. You can also buy overpowered “EX” versions of characters for a dollar each, which are more for fun than serious play. Finally, you can purchase card packs with inscribed cards, which count the number of times they’ve won, been played, etc. These cards are the same as those that come with every character’s deck, which means there’s no gameplay-relevant reason to buy them.

It’s a little complex at first, but just know that $30 will get you access to every relevant part of the game, which sets it apart from most of its CCG competition.

It’s easy to get your friends into

Remember that web client I mentioned earlier? As it turns out, if you don’t want to play against computer or random human opponents online, you can use that as a way to demonstrate the game to anyone who might be interested. They’ll only have access to one character at a time, but you can play as many games as you like with them, and see if its for them without having to spend more money. It’s a smart move that allows more people to get into the game easily — something more card games need. 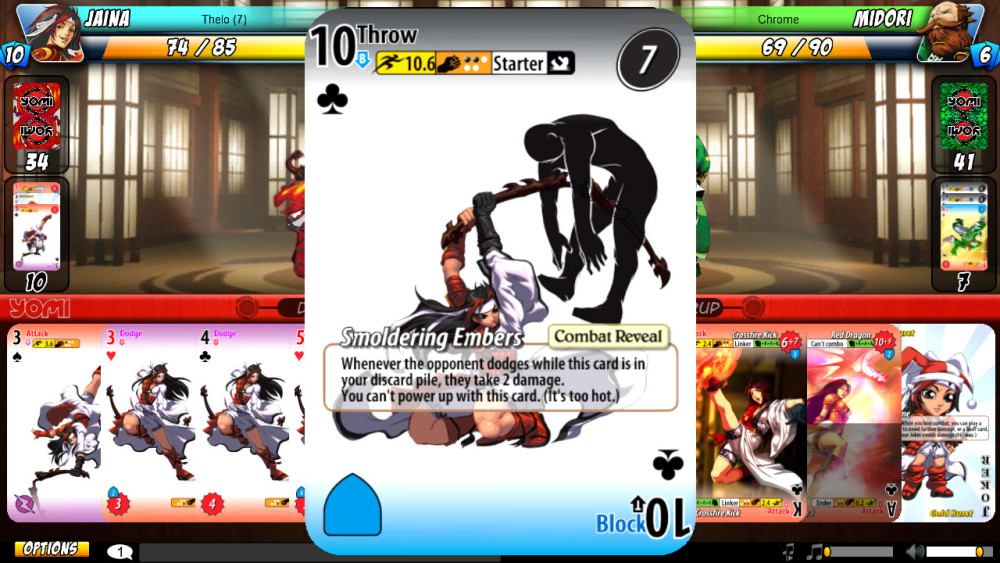 Above: Every card gives you two options to choose from, giving you a better shot at countering your opponent.

Its biggest strengths are also its biggest weaknesses

Yomi emulates a fighting game, and that comes with the genre’s downsides. The biggest issue being that sometimes, playing fighting games can be a bewildering, ridiculous experience that feels unfair. You’ll enter a match, guess wrong three times in a row, and wonder how the heck you’ve already lost. Yomi is an educated guessing game, but it’s still a guessing game, and that means suffering through runs where you guess wrong almost every time. Even worse is when you have a good idea as to what they’ll play, but don’t have the card to counter it. A few characters’ abilities can help you overcome this, but suffering your first few losses in Yomi could make you feel like there was nothing you could have done, and it’s as frustrating as you could imagine.

You’ll have to learn through trial by fire

Making things worse is that while the game does have a proper tutorial, you’ll have to learn most character-specific matchups and abilities by playing against computer opponents. And while the game stops to show you every ability as it applies, it moves too fast for you to learn everything that’s going on. When you play most card games in-person, it tends stop indefinitely until a newer player learns why a card allows someone to go through an intricate combo or draw cards multiple times. But because of the concessions to move online matches along, it favors players who already know how to play. Everyone else will have to learn the hard way.

There doesn’t seem to be many playing

When it was time to move one from computer-controlled opponents to live human ones, I wound up playing against those A.I. opponents again. It took several minutes for me to find an opponent online, and since its search options allow you play against bots while you wait, I played a few matches against them while I waited. You can again rematch opponents as often as you’d like, which is good, because when you find someone else to play with you’ll want to hold onto them.

You can also look for lobbies, but most of these seem dedicated to private tournaments players have set up outside the game client. So it’s great that Yomi allows groups of friends to approach it so easily, because they’ll need each other to play most of the time.

Yomi is a card game, but in order to stick to the vision of every character having a set number of options which work with each other, you can’t modify your deck in any meaningful way. This is great for saving you money and not worrying about having to “pay to win” like in many card games, but if you approach Yomi as a CCG, you’ll end up disappointed.

Yomi fulfills the promise of divorcing the crucial “speed chess and poker” aspects of fighting games from its executional barriers. It creates a tight interplay between characters and options as thrilling as it is crushing. It’s a great way to learn how to outguess your opponent in fighting games, but the game almost forces you to learn by doing. So like any fighting game, Yomi will give you a rush when you manage to skim a win off someone by playing perfectly at the right time — just be ready for the rough learning process.

Yomi is out now for PC, iOS, and Web. Developer Sirlin Games provided GamesBeat a Steam digital download code for the purposes of this review.