Mobile user acquisition is a challenging game that few people want to play and even fewer know how to win. What was once blue ocean has become high seas warfare as millions of apps compete for users.

As a result, the cost of paid mobile user acquisition is way up.

According to a new research report, “Mobile User Acquisition: How top publishers get the best users for less money,” most of the top apps are now spending between $4 and $10 to acquire new users, with spikes up to $20 and $30. Other apps, either not quite so well-known or savvy — or simply in higher-value niches — are spending up to and above $90 for the right user.

“Dollar-users are a thing of the past,” said the report’s author, VB Insight’s John Koetsier.

How, then, do you acquire quality users without breaking the bank?

To find out, the report surveyed 731 mobile developers that have over a billion users among them, and also studied data from almost 14 billion mobile ads.

On average, the cost of acquiring a user is $2.91. But this number varies dramatically across the 52 categories examined. For example, in Social Networking it’s $5 per user, compared with $1.09 in Productivity.

Of course, getting users and getting quality users are two very different things.

The cost of acquisition can come with a significant premium when it comes to getting quality users with high lifetime value, or LTV.

Some developers try to scale their numbers quickly with cheap user acquisition in the $1 to $3 range, but many conventional companies are spending north of $20 for “better quality users.” And it’s not uncommon to spend up to $50:

As a result, the difference in strategies and channels used by mobile-first and conventional companies can be substantial. 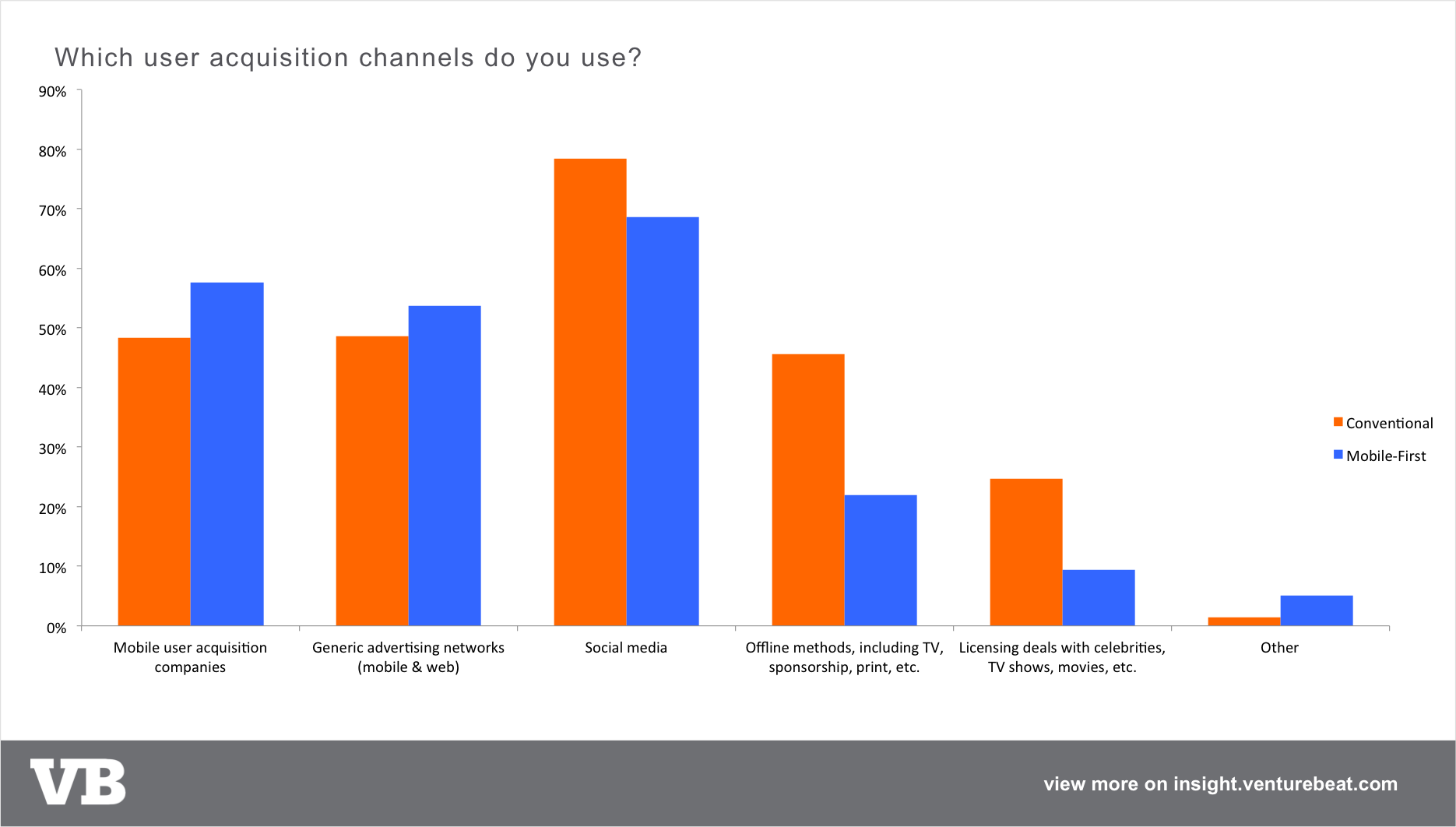 Much of the cost relates to the mobile ecosystem. There are many options when it comes to specific vendors and partners. Facebook, Google, and Twitter come to mind quickly due to their size, but there are many others.

The report reviews the most effective mobile user acquisition vendors — including but not limited to the 800-pound gorillas. AdColony was ranked as a top performer, for example. Tapjoy, AppLift, and Supersonic also got strong reviews, among many others.

It’s particularly interesting to note comparisons between 2014 and 2015, as the report compares new findings to previous ones.

As well-known as Twitter is, dedicated user acquisition companies remain bearish on the company. The company has been making investments and improving, the report found, but so far it’s not been enough to convince the more savvy user acquisition crowd.

One big change from 2014, though, is the preferred cost method. Last year, more than 50 percent of publishers were paying on a cost-per-install (CPI) model. Cost-per-click (CPC) was a distant second, with fewer than a quarter using it. In 2015, however, cost-per-action (CPA) is nearly tied for the top spot with CPI. 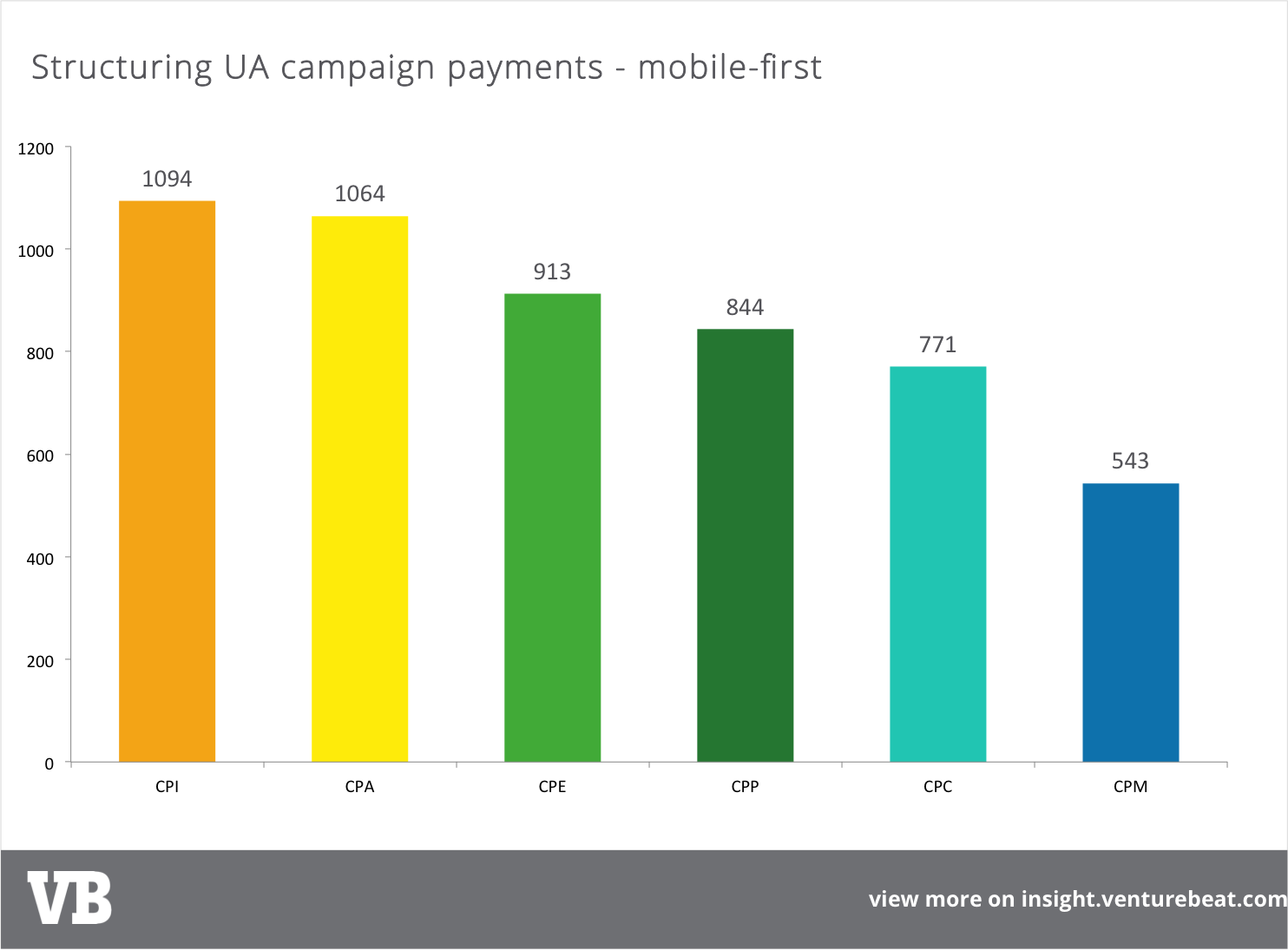 The full report is available at VB Insight: Mobile User Acquisition: How top publishers get the best users for less money.