When I turned 5 years old, my family bought me a Nintendo Entertainment System with Super Mario Bros. More than 25 years later, Nintendo has crafted an exquisite ode to its premier franchise that has reminded me why I fell in love with these games in the first place.

Super Mario Maker (which comes out September 11 for the Wii U) is the latest 2D platformer starring the Italian plumber. But it is also (sort of) all of the 2D Mario games. That’s because it gives players a capable and easy-to-understand set of tools to build and share their own levels. It’s an idea we’ve seen before in releases like LittleBigPlanet, but Nintendo is known for putting a level of polish on its products that few others ever reach. Is that the case here as well? Absolutely.

As I noted, we’ve had plenty of video games that are all about giving the player the capability to create their own content. But that has never clicked for me with the possible exception of Mario Paint for the Super Nintendo. So I went into Super Mario Maker with the mindset that I would love trying other people’s levels, but I would not want to make any of my own.

I was wrong. Designing stages is fun and rewarding in a way that I’ve never experienced before.

When you first start Super Mario Maker, it puts you right into a building mode. A quick tutorial gives you an understanding of what you’re working with, and it then leaves you with a limited tool set that grows over time (see sidebar for more).

But doesn’t the item-unlock system stink?

No! I get why fans got riled up when they learned that Super Mario Maker won’t give you every single tool right at the start. Instead, you unlock them over time.

But this is a wonderful way to keep you coming back and making levels, and it is a great way to force you to get creative with a limited pallet. If you’re serious about making levels, it’s going to take you way longer than nine days to get competent, so embrace this smart limitation.

I went through this obligatory introduction while intending to jump into the play mode as soon as possible, but then I just kept on making my first course.

I found that I couldn’t stop coming up with ideas for my stage. And the game makes constant, fast-paced iteration so simple because it’s just one button press to go from designing to playing your level. So you’re always play testing. You’re always figuring out what works and what doesn’t. And you’re always stumbling across interesting quirks in your level that you didn’t even realize existed.

It’s simple and addictive, and it’s something that works especially well thanks to the Wii U’s GamePad controller. 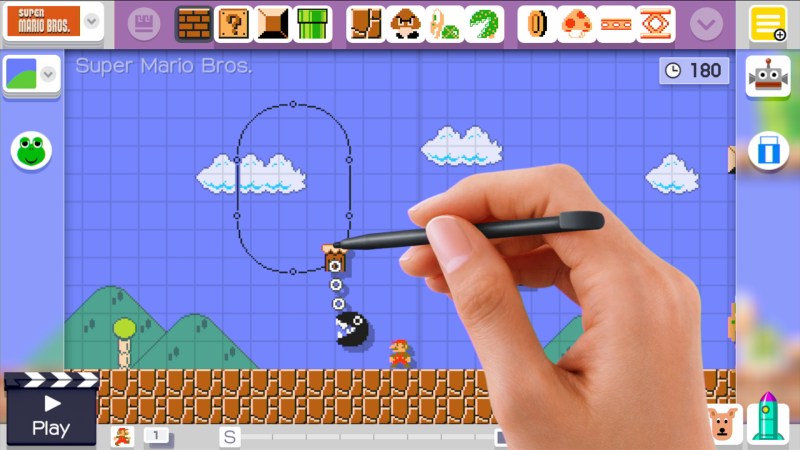 If you have an idea that isn’t working in one of the supported games, chances are good that it’ll work in one of the others. This keeps things fresh, and it ensures that both creators and players have a lot of variety to keep them entertained.

Between the brilliant controls, the instant play testing, and the option to switch between the different styles, Super Mario Maker’s barrier to building levels is the most minuscule I’ve ever seen. And I feel confident saying that because if it was able to get me making stages — and I’ve made nearly a dozen — then I think just about anyone will have a similar experience.

After losing hours of my Super Mario Maker time to building stages, I was starting to think that I wasn’t going to play other people’s creations as much as I originally expected. But I did, and I have. And I want to go play some more right now.

The thing about Super Mario Maker is that you’ll get stages that Nintendo would never make. I’ve played courses so hard that I was manifesting new curse words after every death. And I’ve played stages so loopy and weird that they don’t even really make sense for Mario.

And then, at the same time, you’ll get the occasional level from someone who has absorbed Mario level design into their bones. Someone who is trying to take everything that Mario creator Shigeru Miyamoto has taught us over the years to make something that would fit into the next 2D Mario game.

Having that sort of variety means that everyone will find something they respond to. 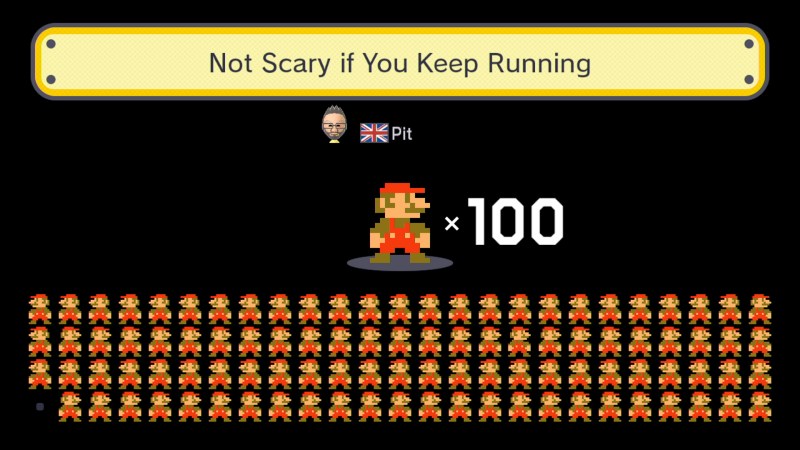 Personally, I’ve seen a lot of the exact kinds of stages that I want: fiendishly difficult platforming levels.

I discovered them by playing the 100 Mario Challenge on Expert, where the game gives you 100 lives and a series of tough stages. It was here that I came across one level in particular called Underground Spin that I became obsessed with beating after losing the bulk of my 100 lives on it.

Underground Spin is a Super Mario World stage that requires players to do the nearly invulnerable spin jump on top of spiky enemies while performing precision jumps. I must’ve died 200 times on this stage, but I kept coming back because it is simultaneously tough and fair. It also gave me a level of challenge I never got in Super Mario World while letting me still enjoy the look, sound, and feel of one of the greatest games ever crafted by humanity.

But the point is, maybe you don’t like these super-tough stages. And that’s awesome because other people will make plenty of levels to suit your tastes. We can all have the Mario game that we want.

The music and sound

Nintendo has a well-deserved reputation for producing excellent original music and remixed versions of its classic hits, and Super Mario Maker features example after example of the company’s audio mastery.

Every Mario stage features a remastered version of the original music. Playing Super Mario World levels on my sound system caused my family room to fill with a crystal clear re-creation of the tunes I grew up on. The high notes pierced through my speakers while the lows had the subwoofer rumbling the entire house. I don’t know if the Super Nintendo was capable of producing this range of sound, but the Wii U has no trouble with it — and it makes these 8-bit and 16-bit stages feel more alive than ever before.

In addition to the original music, each stage also has an insane, awesome, unbelievable remix for when you’re building a stage. Here’s an example because it’s so difficult to describe:

This music is also interactive. As you place elements into a level, the music will chime in with a musical rendition of the items name. Place the fish-like Cheep Cheeps into your course, and musical, digital voices will happily sing “Cheep Cheep” to whatever tune is currently playing.

Again, this makes the game feel like it is totally alive and bursting with atmosphere and character. It shows Nintendo’s dedication to polish, and it just makes me feel like the game loves me. It wants every action I take to have a reward of some kind. It’s astounding.

Nintendo has taken those now-ancient games and updated them to look exactly the same but with support for high-definition resolutions and a solid 60 frames per second. This makes every detail — like the colors, the animations, and the pixel designs — pop like never before.

Super Mario Maker is likely worth the purchase just to see these games looking this crisp. 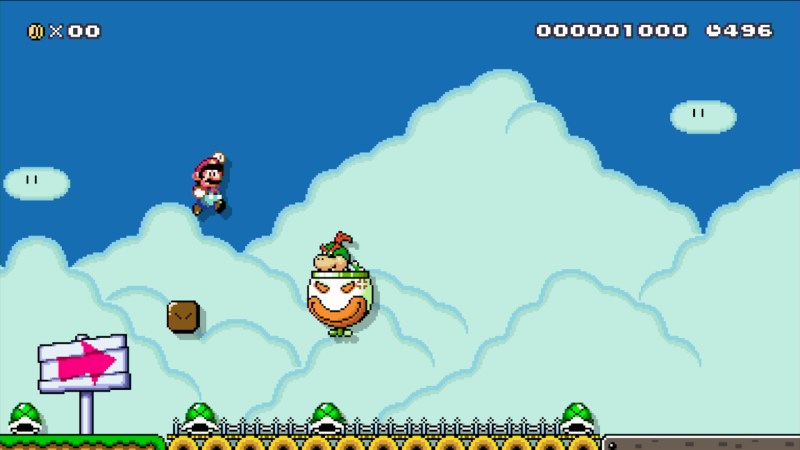 While Nintendo has a reputation for producing high-quality art and music, it is also known for disappointing fans when it comes to online gaming and networks. But I have found that the level-sharing system works wonderfully in Super Mario Maker on the prerelease-state servers.

When you’re not building a stage, you’ll spend most of your time in the mode called “Course World.” This is the hub where every user-uploaded stage ends up. Here, you can pick from a list of levels and sort by creator, by difficulty, by game style, or whatever.

If you like a stage, you can star it. If you want to leave a message for others or the creator, Miiverse (Nintendo’s quirky take on Xbox Live) functionality enables you to do that either in the stage or after it or even on the Web on the Super Mario Maker Miiverse game page. 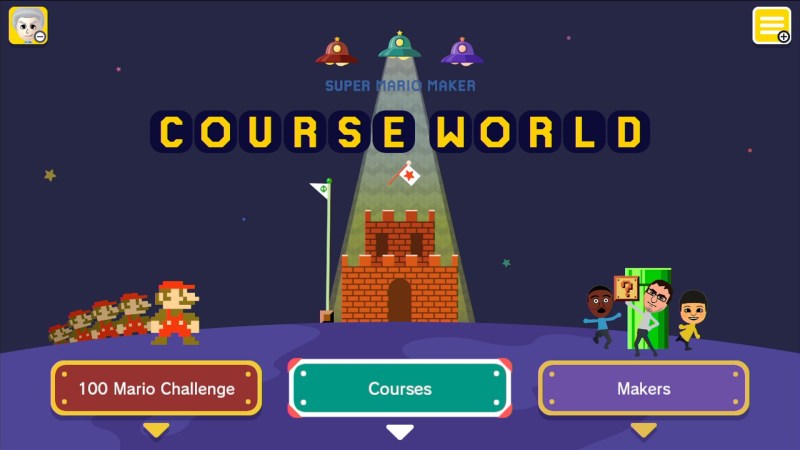 If you don’t want to hunt for levels one-by-one, you can use the aforementioned 100 Mario Challenge mode. If you come across a stage that you like and want to play again, just star it. That’ll make it appear in your list of “starred stages.” If you forget to start it, you can always scroll through the list of “played stages” to try to find it.

This system also enables you to keep up with your friends or favorite creators. Instead of starring levels, you can star people — and this will give you a list of creators to help you quickly find new courses that they’ve built.

It all works, and it all feels like a modern online interface. It reduces the friction between you and finding some fun levels, which is the most important aspect of an online infrastructure like this.

I do really like the online interface, but I do have one complaint. I wish that players could make their own playlists … and, yes, this is me nitpicking.

I’ve built a series of levels, and I wish I could present them to my friends as an entire, self-contained game or at least a 4-stage world. These levels are best experienced back-to-back, but most people won’t play them that way.

Even better than a playlist would be a branching overworld map editor. What if I could made a bunch of Super Mario Bros. 3 levels with branching paths. For example, if you find a secret exit on one stage, it takes you to a special bonus level that I built.

I would love that, but I also understand why it isn’t in this game. I’m sure Nintendo has thought about this, and the reason it’s not here is probably because the company wants people to focus on designing a single course without distraction. But in my search to say something negative about Super Mario Maker, this is the only complaint that occurred to me. 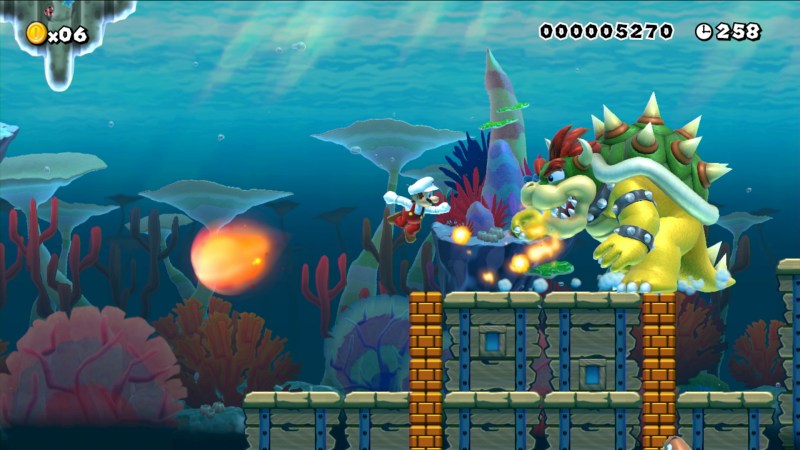 Now we have this game that will produce an effectively limitless number of Super Mario stages. I’m not great at math, but I think if you multiply timeless gameplay by countless stages, you get something that is astronomically fun.

But Nintendo didn’t just do the bare minimum here. It didn’t just scrap together a level editor and sharing system. It has put unparalleled craft and care into every element of this game because it loves Mario as much as we do. And that propels this game into a whole other realm of greatness.

Super Mario Maker is due out September 11 on the Wii U. Nintendo provided a downloadable review code for this game to GamesBeat for the purposes of this review.