Twitter is bringing its self-service ads platform to more people around the world. The company announced that small- to medium-sized businesses (SMBs) in more than 200 countries and territories can now advertise and reach their target audience on Twitter in 15 languages. 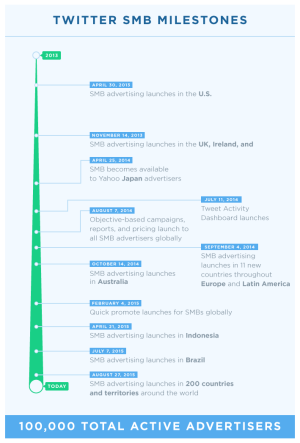 And the program has been growing in the more than two years since it began: Twitter says it counts 100,000 total active advertisers on its network, including SMBs.

Originally launched in just the U.S., Twitter has gradually expanded its self-service ad platform to other countries, including the U.K., Ireland, Australia, Latin America, Indonesia, Brazil, and more. But now more SMBs in over 200 countries will be able to utilize Twitter’s mobile app install ads program, targeting tools, objective-based campaigns, reports, and pricing to reach their intended audience.

Naturally, the expansion of Twitter Ads can be good for the company’s bottom line. After all, the more companies that have access to the service, the better their marketing, and the more money Twitter makes. In July, Twitter announced it brought in $452 million in ad revenue, an increase of 63 percent annually, which contributed to the $502 million in total revenue received. How much SMB activity contributed to the company’s bottom line is unknown — the report doesn’t provide specific breakdowns. International advertising revenue was also up 75 percent annually to $166 million.

But the SMB focus isn’t new for Twitter — it’s had this mission ever since Twitter started. In fact, interim chief executive Jack Dorsey started the first small business account.