Boomlagoon, the Finish studio founded by former Angry Birds developers, is releasing its third game this fall. Spirit Hunter is an action role-playing game in which cards are your main resource. Collect cards and craft items to fend off the ghoulish monsters on your heels.

Digital card games are a dominant fixture in the mobile landscape. Fueled by the success of Hearthstone: Heroes of Warcraft, countless competitors have leapt into the lucrative field, including Star Wars: Force Collection and Marvel: War of Heroes. The worldwide revenue of this genre should near $1.3 billion in 2015. So it’s no wonder that Boomlagoon wants a nab an ace of its own. 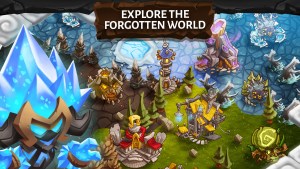 However, Spirit Hunter is not just a reskinned version of Hearthstone. Rather than focusing the entire game on card duels, Spirit Hunter uses cards as a complement to the role-playing adventure. Heroes must traverse a variety of dangerous locales where environmental-specific beasts roam. That means you won’t be able to build up just one or two decks to excel. Instead, you have to be as cunning as you are flexible, which gives the game a wrinkle to separate it from its peers.

This isn’t the first time that Boomlagoon has had a dalliance with card collecting. Their second game, Monsu, spiced up its endless running with cards that augmented your abilities. If, for example, you enjoy riding dinosaurs, simply equip a card that gives you an invincible, prehistoric lift whenever you snag a floating orb. The cards in Monsu separated it from the many other endless runners, so it makes sense that the developer would go down that road again.

Building a mobile game around card collecting is a smart way to tap into a steady revenue stream. Spirit Hunter, like Monsu before it, is free to play. And Monsu is enjoyable even if you don’t spend a penny. But those empty spaces where cards should be can burn a hole in the minds of people who crave completion. And every card is just waiting to be upgraded. If you’re patient and skilled, you can unlock most everything by playing. A couple dollars can go a long way, though, and once you spent a little, why not plonk down a little more.

That philosophy crumbles if the core game isn’t fun, though. It remains to be seen how Spirit Hunter will turn out, but it does have a good pedigree. Few games in the mobile space are more revered than Angry Birds, after all, and Boomlagoon proved it can still create fun games even after parting ways with Rovio. At least we won’t have to wait long to find out if their next game lives up to their past efforts.