Microsoft is using a new tactic to keep Windows 10 users from switching away from its Edge browser. The first time Edge users search for “chrome” or “firefox” using Bing — presumably with the intent of downloading those browsers from Google or Mozilla, respectively — they are shown a serious-looking message at the top of the search results.

“Microsoft recommends Microsoft Edge for Windows 10,” it says. A “Learn why” button next to that message brings you to a website showing off Edge’s features.

Above: What I saw in Bing in the Edge browser the first time I searched for “chrome” on a new computer running Windows 10. 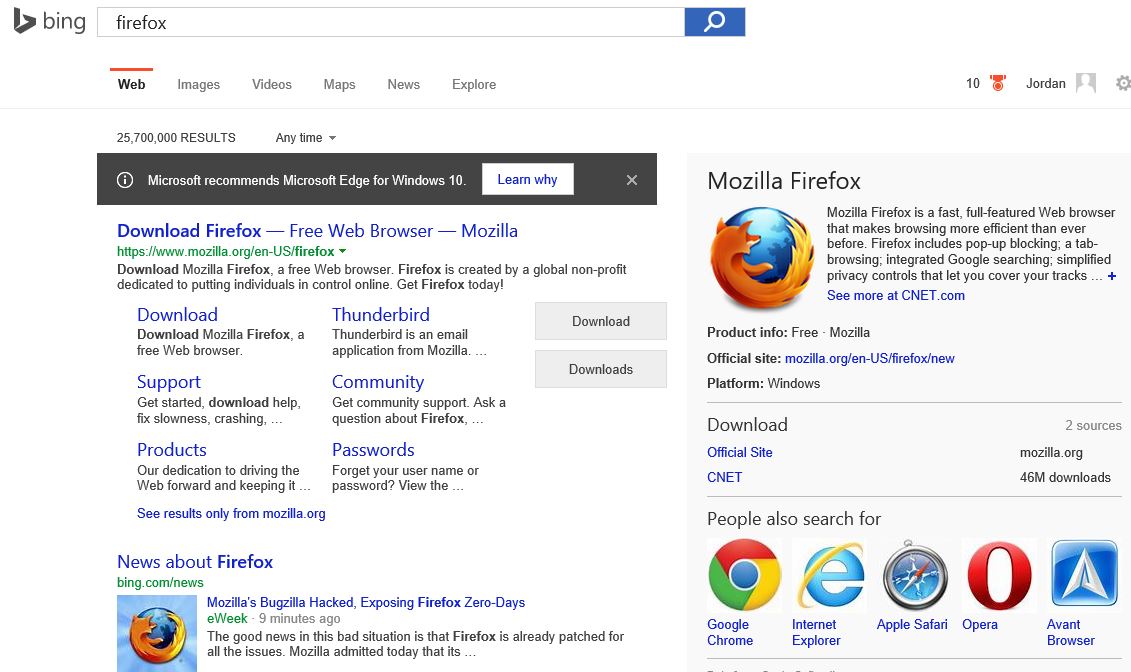 Above: What I saw in Bing in the Edge browser the first time I searched for “firefox” on a new computer running Windows 10.

The message only showed up the first time I searched for “chrome” and “firefox” in Edge, as I was just starting to get comfortable on the new Acer Aspire One Cloudbook 11. Subsequent searches for those terms did not trigger the message. Neither did “opera,” which is another non-Microsoft browser. It’s not clear how widely deployed this message is; I’m in the U.S., but it’s possible that the message isn’t showing up in other countries.

“Microsoft Edge was designed exclusively for Windows 10 with features and functionality that enhance the browsing experience such as Cortana, Web Note, and Quick answers,” a Microsoft spokeswoman told VentureBeat in an email. “These notifications were created to provide people with quick, easy information that can help them get to know these experiences better. That said, with Windows 10 you can easily choose the default browser and search engine of your choice.”

Microsoft Edge, which Microsoft designed to compete with Chrome and Firefox and replace Internet Explorer in most scenarios, was a big release for Microsoft. Naturally the company wants to use the excitement around Windows 10 to build the Edge user base. Chrome has more than 1 billion users, while Edge became available to everyone less than two months ago, but is missing key features like extensions.

Mozilla, for its part, was not happy with the way Microsoft made it more difficult to restore previous settings and thus choose a browser like Mozilla’s Firefox as the default in Windows 10. Mozilla chief executive Chris Beard even wrote an open letter to Microsoft chief executive Satya Nadella about it, though Microsoft did not make any changes in response. “Consumers have the choice to set defaults, including for web browsing,” a Microsoft spokesperson told VentureBeat at the time.