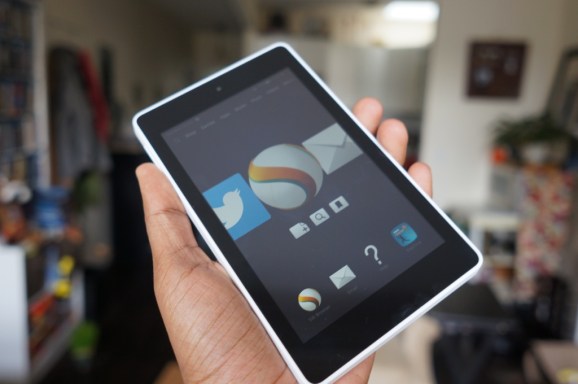 Amazon is reportedly looking to launch a $50 tablet. The device will feature a 6-inch screen and go on sale in time for the holiday shopping season, according to “people familiar with the matter” cited by The Wall Street Journal.

It’s not a huge stretch to see Amazon slashing the price of its tablets even lower than they already are: After all, the online retail giant has always played a margins game. Amazon’s 6-inch tablets currently start at just $79 for the Kindle and $99 for the Fire HD.

The $99 price tag includes advertisements, though consumers can opt to pay $114 for a version without ads. It’s not clear if the $50 version will include ads, but it’s certainly possible.

Amazon clearly wants to attract buyers looking for the best bang for their buck, but that’s a dangerous game to play. Most tablets are already quite affordable, but a $50 option would mean taking even more shortcuts in terms of screen quality, durability, and battery life.

Indeed, rumor has it the $50 tablet will have a mono speaker, rather than stereo. As for the screen, Amazon CEO Jeff Bezos apparently has tried this before:

Mr. Bezos had set an internal goal of the $50 price tag for versions of both the Fire tablet and Kindle e-reader, viewing the rock-bottom prices as a crucial lure for a more cost-conscious group of buyers, the people said. But the e-reader screen technology from its vendors ultimately proved too expensive to drop the retail price, the people said.

To lower costs, Amazon has reportedly outsourced much of the development of the 6-inch tablet. Two firms were named: Shanghai Huaqin Telecom Technology and Taiwan’s Compal Communications.

The $50 device will not be Amazon’s only unveil. As always, the company will refresh its tablet line later this year. In addition to 6-inch devices, there will also reportedly be 8-inch (not new) and 10-inch tablets (this would be new).

Last month, we heard whispers that Amazon was looking to give up on making smartphones. Tablets though, are still very much on the agenda.