I never think about my router until there’s been a terrible mistake. And then it’s all I can think about. Once my internet goes down, I have to shove my television out of the way, sift through a tangle of identical-looking wires, and then hope that everything can be resolved with a quick reset. If it can’t, then I’m off to the store to replace my router with one that will do its baffling job without giving me a headache.

Google is trying to lessen the pain associated with routers by fueling your internet with its own device. It’s carved from the Apple “It just works!” method of design in which simplicity is the key, so even though it comes with a hefty cover charge ($200? For a router?) it may be worth it, if only for the money you’ll save on headache medicine. 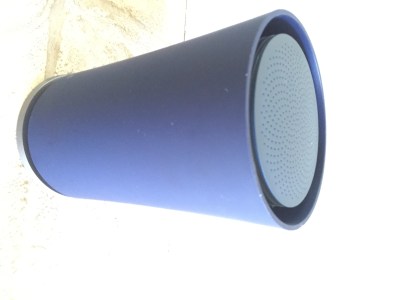 OnHub sat on my bookshelf for two days before I got the nerve to set it up. I remembered the past horrors I had gone through with routers — the hours spent hooking up cables and praying that my devices would detect this alien source — and feared that my sanity couldn’t take another struggle. But that wasn’t the case here. OnHub comes in a sleek box that’s all smooth surfaces and hidden hatches. Nestled inside are a router, two ethernet cables, and a power cord. The directions could be written on the back of a matchstick box.

The router itself looks like a speaker, and is supposed to be displayed in the way you would an audio amplifier. Google urges you to leave your OnHub in the open so the world can behold its beauty, although the short power cable put a pin in that balloon. I still have mine nestled next to my dusty television, although it is much more striking than the turtle-like router I usually employ.

Setup wasn’t quite as easy for me, an iPhone user, as it was for my Android friends. Once I connected the power and ethernet cables, I had to manually type in the router’s name and password for my phone to recognize it. This is only a small hassle, though one worth noting. If you have an Android mobile, the router plays a lovely tune that captures the heart of any nearby phone with the appropriate software. And if you have a Windows Phone? Oh, well, everyone makes mistakes.

The aforementioned software is the key to the OnHub’s elegance. Anyone who has used a router before knows the ugly software you must navigate on your computer. There are so many options and numbers that a Luddite would surely run screaming into the woods rather than learn what VPN and DSN mean. Setting up OnHub with a slick app eliminated every inch of frustration I had anticipated. In less than a minute, I created my network (Dinosaur Party) and went about connecting as many devices to it as possible.

To do a proper review, I  wanted to push this router further than I would during normal use. So I connected a Kindle, iPhone 6, iPad Air, PlayStation 4, PC, Wii U, and Vita to it and started downloading and streaming as much stuff as I could. And the router stood up to my data barrage. I thought it might choke when I tried to cram Infinite Jest onto my Kindle, but it kept moving right along without skipping a beat. This, even though I had scattered these devices throughout my house to make the exercise as taxing as possible.

So, the device works as intended. But I haven’t had any problems with my current router, so why would I plonk down $200 for the OnHub? That’s the question. The app is incredibly easy to use. I can check how well the router is performing, see how many devices are currently leaching bits, and even prioritize one device over another. Or at least I think I could. I didn’t notice a difference in download speeds when I did that, but in theory it’s nice to know that my Vita could get the priority it so rightly deserves. 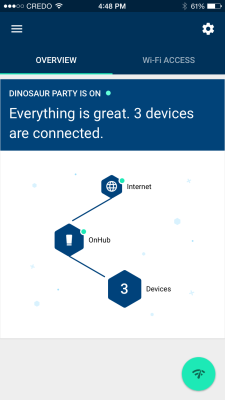 Then there’s the light that circles the router like a halo. Most routers have a bevy of flashing lights that may be good for hypnotizing babies, but little else. The OnHub has one light which, for my purposes, is the “Everything is fine” light. Oh, it changes to signify when it’s being setup or if there’s a problem, but mine has been a soothing turquoise for as long as I’ve been staring at it. I have no clue why there’s a speaker at the top other than for the cute tune it plays when plugged in, but maybe Google will do something with it later. My birthday is coming up, if anyone in Mountain View is listening, and I would enjoy a celebratory serenade.

The seldom used speaker isn’t the only aspect that hovers above OnHub like a mysterious balloon. There’s a USB plug that doesn’t do a darn thing, though maybe it will be unlocked at a later date. Could you plug your phone into it to use as a hub? Who knows! And Google isn’t talking. There’s also Bluetooth connectivity that does about as much as a real blue tooth. It’s unclear if Google has big plans or just wants to ship a future-proof router, but there are definitely elements that are unusable at present.

And then we get to the big setbacks. If you’re like me and want your router to be easy to set up and easy to forget, the OnHub is ideal for that. But if you care about the intricate options that help you build a secure wall around your home, OnHub is like guarding your house with a Chihuahua. For instance, there’s no way to create a guest account. My current router has a guest account (called Raptor Rex) even though I’m not quite sure why I need one, and I’m sure there are many other people out there who are happy to open their guest account with friends and family but hoard the real one like a winter chestnut.

There are other features to play around with, such as UpnP, Port Forwarding, and Static IP, but I couldn’t find a VPN option anywhere. Also, there’s only one outgoing ethernet port. In my current setup, I have my PlayStation 4 and Xbox 360 tethered so I have optimal speeds for my gaming devices. If I switched to the OnHub, I’d have to make Sophie’s Choice and let one go the wireless route. Again, this isn’t a massive problem, but it is less than optimal. This device really is geared toward people who have a wireless home and want to ignore their router 99% of the time.

And that’s my takeaway. You’re paying $200 for Google to worry about everything. My earlier comparison to Apple — or at least the ideal that Apple represents — is the right way to look at this device. If you’re tired of dealing with routers, don’t care about VPNs or guest accounts, prefer wireless connections, and are happy giving Google the keys to your house (figuratively, of course), than it’s worth the premium cost. But it doesn’t do anything that my old Linksys router can’t. It just looks a lot prettier doing it.