“Dungeons of the Endless” is an apt name for this adventure. Formed from a union between roguelikes and tower defense, this unforgiving iPad journey confines you in a space-station with no more than a sliver of hope to escape. Endless? Not quite. But it’s going to be awfully tough to break free.

Lost survivors struggle through a blackened hellscape. You marshal your people through unlit spaces, one room at a time, never sure what’s waiting for you on the other side. Time moves in jagged spikes that causes you heart to mimic its erratic curve. Nothing happens until you choose to walk from one room to the next, so you have plenty of time to plan what you’re going to do next. Place turrets to protect you from roaming monsters, construct food generators to fill your belly, or scout the map to find ideal choke points.

It’s only when you move onward that chaos roars. Opening a door could unleash an army of aliens who were waiting for you to enter their lair. Once alerted, they may appear in any room you’ve already visited. If you planned poorly, you can be surrounded before you realize what’s happening, all of your effort evaporated with one misstep. But if you put up a good defensive system, those enemies will fall at your feet. Each encounter makes you happy to be alive, though you know it only takes one false move to meet your end.

Dungeon of the Endless is ostensibly turn-based. Tapping a room moves a character to that position, and once inside, they automatically searches the surrounding area. Treasure chests may hide gear to upgrade your avatars, or resources to fill your coffers, and then you’re free to decide your next plan of action. There’s no clock ticking down when the next action plays out. Rather, you can take as long as you like to decide if you’re going to place turrets in that narrow hallway or generators in that open space.

Because you move at your own pace, the tension is a constant presence hovering over your shoulder. You’re never rushed to the next room, so if you should make a mistake, you have to own that failure. This creates a suffocating atmosphere in which you think out every plan of action two or three times before deciding on the ideal strategy. And you better plan wisely because things get hectic in a hurry. 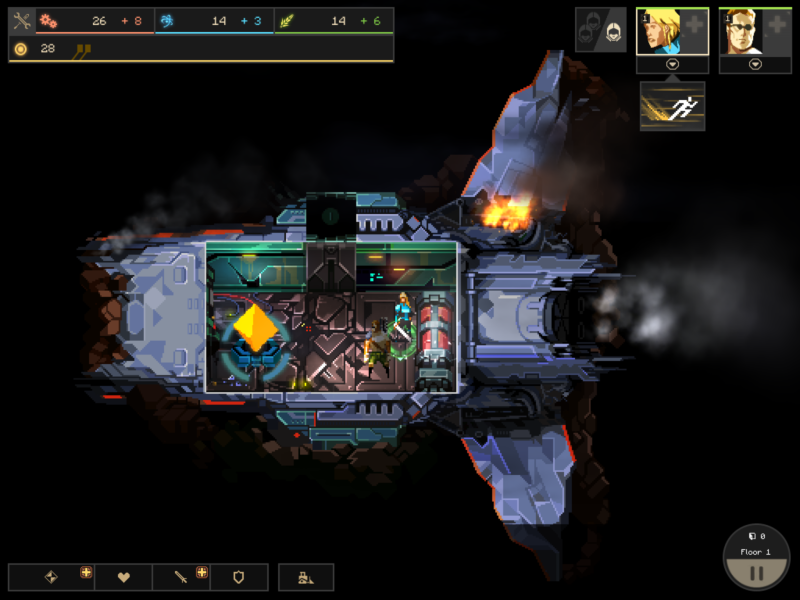 When hostile aliens ambush, you experience a considerable shift in priorities. Your characters automatically attack pursuers, though that’s often a good way to die. Swarms can tear down a soldier quicker than you would think, especially if confronted when alone, so it’s often smart to play defensive and evasive.

I usually ran whenever monsters would close in on me. In every few rooms I had employed enough turrets to make short work of whoever wished me harm. Before a single laser blast could be fired, I would bunker down in a safe room and let my machines do the dirty work. It could be seen as cowardly, but I would rather have a yellow belly than lie dead on the ground.

It’s not always possible to flee like a scared rabbit, though. Resources are scarce, and as I marched deeper into the spacecraft, I had to be ever smarter with my turret placement. No one strategy is going to lead you to the exit, and I often had to improvise in a moment’s notice.

The most important strategy is who you decide to place in your party. Before you begin, you choose from a wide selection of characters, each with differing attributes. If you want to a burly soldier to blow aliens to smithereens, you may have to skimp on your scientific acumen, which causes a major shift in your escape plan. The varying strategies mean that, even if you do find you way to safety, you have plenty of reasons to return to see if another tactic works.

Dungeon of the Endless originated on PC, though you wouldn’t realize that if your first experience with it is on the iPad. There’s no direct control of characters to trip you up in the heat of battle. Rather, every action requires no more than a solitary tap. Movement, equipment, and crafting all are easily implemented with the sleek interface. Even during fights, I was completely in control of my action. And if you do need to dry your sweating palms, you can pause the proceedings while plotting exactly what you’re going to do when you resume.

Every death places you back on the ground floor. Your progress is wiped away (except for any crew members you rescued, who you can now play as), and your motivation with it. This is a core component of roguelikes, and one that works well in many instances. But in Dungeon of the Endless, it’s a detriment. It doesn’t have enough variety early on to make each step inside the space station exciting. Once I understood the basics, I went through the motions on the early floors, which made me less interested in firing up another attempt when I eventually failed. 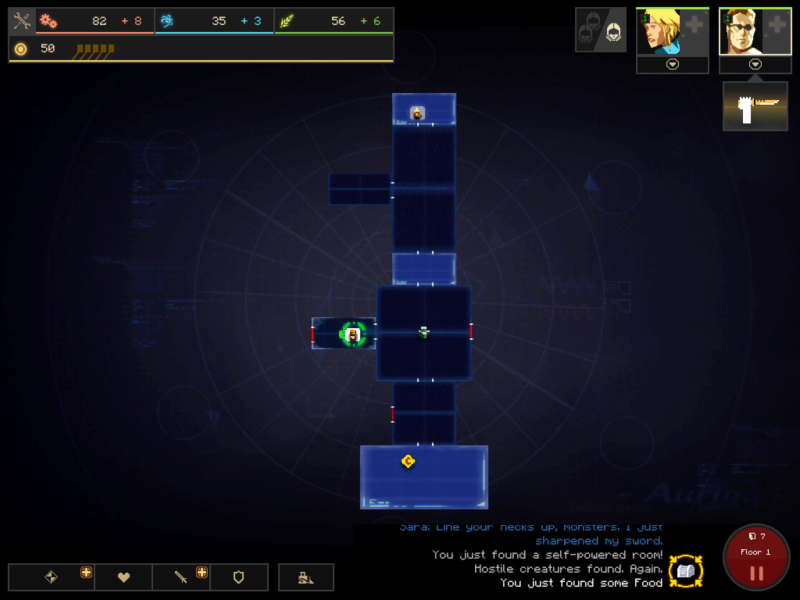 Above: Zoom out the map to monitor the whole facility.

Dungeon of the Endless works well with the iPad interface and is a great game in its own right. Be warned if you’re unaccustomed to roguelikes. It can be discouraging starting over from scratch, so even though the action enticing, failure is so punishing it can be difficult to brush yourself off for another attempt. If you do get sucked in, however, you’re going to laugh at the piddling entry fee. $5 is mighty cheap considering the pleasures and ordeals that are waiting.

Dungeon of the Endless is out now for iPad. The publisher provided us with a code for this review.